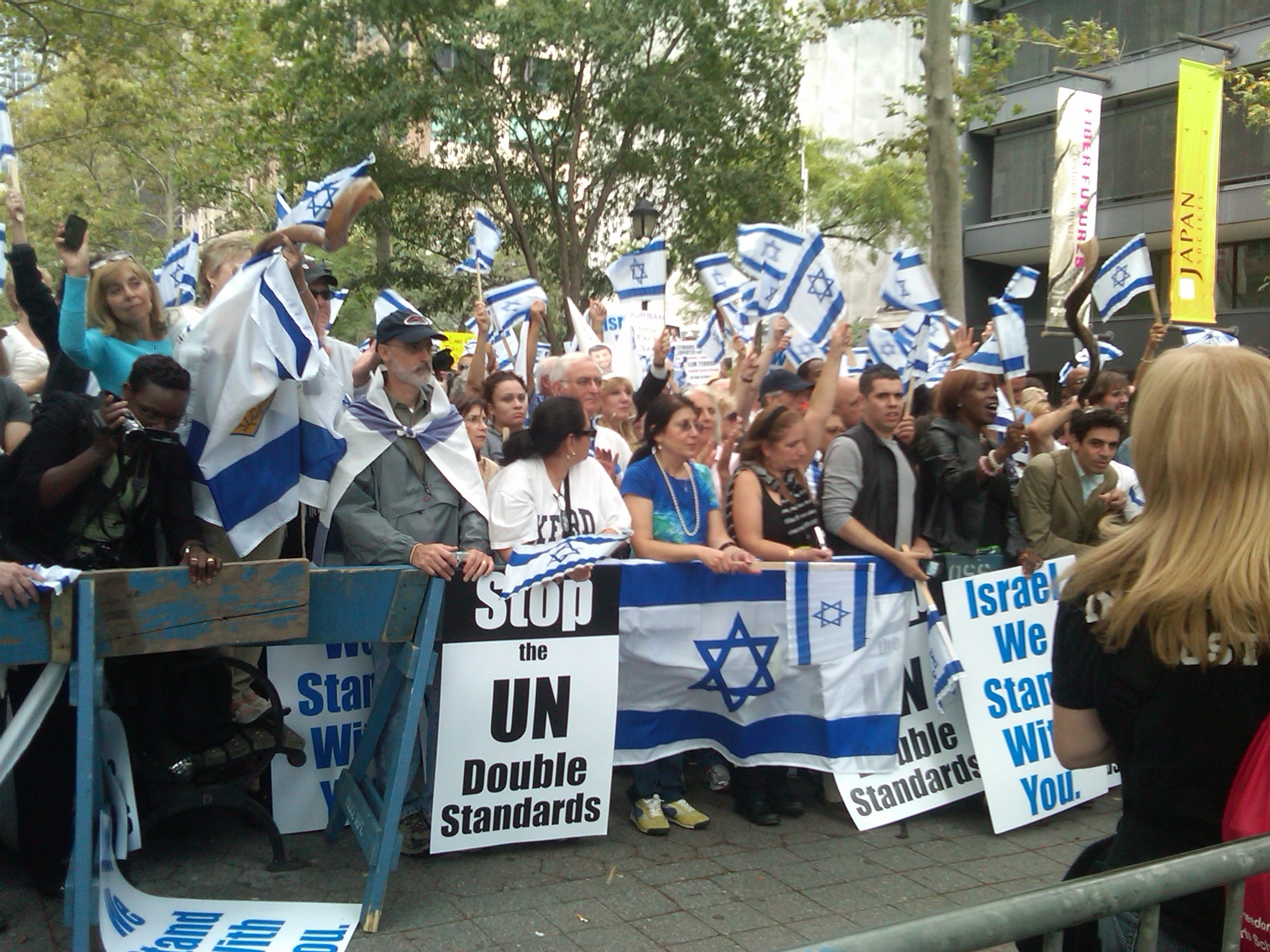 Before noon on Wednesday, September 21st, scores of stalwart Christian supporters of Israel along with sizeable contingents of Jews, poured into Dag Hammarskjold Plaza near the United Nations to express their indignation over the unilateral Palestinian bid for statehood expected to take place on Friday as part of the annual UN general assembly meeting. Sponsors of the rally said that a coalition of close to 50 Christian and Jewish organizations along with the Israeli government had taken part in mobilizing over 5,000 people to attend under the banner of the “Eagles Wings Coalition Council,” named for the Buffalo, New York based organization of the same name, headed by Robert Stearns. Many rally participants had traveled from across the United States and Canada to attend.

Just as President Barack Obama had concluded his address to the General Assembly, where he exhorted the Palestinians to abandon their quest for a unilateral declaration of statehood at the United Nations, speaker after speaker underscored the irrefragable anti-Semitism and blatant anti-Israel predilections that have come to define the mantra of the UN. According to UN Watch in Geneva, over the last five years, the UN Human Rights Council has adopted 70 resolutions condemning specific nations and 40 of those have been levied against Israel. Likewise, the General Assembly has adopted approximately 20 anti-Israel resolutions each year, compared to only half a dozen targeting other countries.

The demonstrators also roundly condemned the Durban III conference that is scheduled to take place tomorrow and marks the 10th anniversary of the first Durban Conference in South Africa. The ostensible agenda of the UN sponsored conference was to have addressed issues of global racism, sexism and xenophobia, but rapidly morphed into a series of forums in which anti-Israel non-governmental organizations used their time to propagandize against the Jewish state.

“The original Durban conference equated Zionism with racism,” said Robert Stearns, director of Eagle’s Wings. “Thankfully, the United States government and many others have not participated in the Durban conference and yet it continues. A Durban event in Geneva went so far as to invite the president of Iran as the keynote speaker. When he’s your keynote speaker at a human rights rally, you should know there’s a problem,” he added. In addition to the U.S. and Israel, Australia, Austria, Bulgaria, Canada, the Czech Republic, France, Germany, Italy, the Netherlands, New Zealand and the United Kingdom are boycotting Durban III.

Saying that everyone attending the rally serves as “watchmen on the wall of Israel,” he poiinted to the religious rights granted to minorities in Israel as well as rights for women and said that Israel is “the only democracy in the Middle East.”

“I believe that all of us who worship the God of Abraham, Isaac and Jacob found in the Bible, see the modern state of Israel as an expression of God’s fidelity to his friend Abraham,” he said, “so we are concerned and pay attention to what’s happening in Israel.”

As organizational and community leaders gathered on the stage, the rally attendees held aloft signs saying, “Stop the UN Double Standards,” “Israel: We Stand With You,” “Jews Want Peace: Arabs Want Pieces” and “Denounce Durban III,” while a sea of blue and white Israeli flags were also raised.

“The whole land of Israel belongs to the Jewish people,” said Helen Freedman, the executive director of Americans For a Safe Israel (AFSI). “The unilateral declaration of independence is very, very dangerous, because what it does is signal to the Arabs that they now have a state. There’s no legitimacy to their claim for a state, but the population will get the message that they do have entitlement and the whole situation will really spiral out of control,” she declared.

Roz Rothstein, national director of of the pro-Israel student advocacy organization “StandWithUs” said, “Today we are all Israelis.” Pointing to the UN, she quipped, “In that building over there, they are fools. They have turned right and wrong upside down. They have turned evil and good upside down.”

“Do not compromise in the name of peace. Do not even talk about peace when the other does not want it,” intoned Simon Deng, a refugee from the Sudan and a former slave. Calling himself “a friend of the State of Israel,” he drew wild applause from the crowd when he called for “an undivided Jerusalem as Israel’s capital.” Spotlighting the horrific hypocrisy of the world body, Deng said, “The UN is turning a blind eye to racism in the Islamic world while condemning democratic Israel.”

Focusing on the escalating genocidal agenda emanating from Teheran, Deputy Speaker of the Knesset Danny Danon said, “Inside the UN today you can see hatred against the Jewish people. President Obama, you have to wake up and you have to show leadership and you have to deal with the threat that is coming from Iran.”

Other speakers included Herb London of the Hudson Institute, Dr. Marvin Belsky of the Human Rights Coalition Against Radical Islam (HRCARI), Richard Allen of JCC Watch, Bishop Carlton T. Brown, from Harlem who spoke on behalf of 15 uptown churches and Rabbi Yaakov Y. Kermaier, the spiritual leader of Manhattan’s Fifth Avenue Synagogue and President of the New York Board of Rabbis.