The always excellent Bill Whittle on life, risk and liberty.

There is no freedom, no life worth living, without risk.

Presented for you now, an exercise in considering the incredible: that Barack Obama, et. conspiratorial al. would plan to suspend elections in an orchestrated national emergency, perhaps a false flag operation blamed on his opposition.

I do not say this will happen, nor am I selling the idea. The point is, this should be scrutinized and in principle when such things are fully sounded out, their probability — that is, the opportunity for them, lessens. And the objective in this: with an open mind, to gain the situational awareness necessary to keep from being duped by normality bias (what we are accustomed to, what we think we know) and by agitprop.

“Forewarned is forearmed.” If you would embark upon such a war-gaming journey of the mind, we suggest six initial steps, given below.

1. Make sure you are familiar with North Carolina Governor Bev Perdue’s “joke” that by sober evaluation was not a joke, but a flatly put suggestion called by some a “trial balloon”: that congressional elections should perhaps be suspended.

You can hear her comments on Tuesday, September 25th…

…or read them, by means of Big Government and New Zeal – Trevor Loudon:

2. What a coincidence! Gov. Perdue, it is time to recall, is one of ten appointed by Barack Obama to serve on a very NWO-ish sounding Council of State Governors, arrayed around the country, purposed to handle responses militaristic and otherwise, to national emergencies.

That might seem to be just the kind of council (and remember the Russian word for governing council is “soviet”) that would deal with the suspension of our Constitutional governance and the imposition of something instead which would lay in a spectrum between that and dictatorial, martial law.

At the White House announcement of the Executive Order creating that extraconstitutional council, on February 4, 2010, this what they presented as Perdue’s bio:

Governor Beverly Eaves Perdue, Appointee for Member, Council of Governors Beverly Eaves Perdue was elected Governor of North Carolina in 2008. She sits on the National Governors Association Committee on Economic Development and Commerce and Committee on Homeland Security and Public Safety, and is a Lead Governor on the National Guard. Governor Perdue has a long history of public service, including her tenure as Lt. Governor from 2000 -2008 as well three years in the North Carolina House of Representatives and nine years in the State Senate. As Lt. Governor she led North Carolina’s response during the 2005 round of the Base Closure and Realignment Commission. Prior to running for office she worked as a public school teacher and as director of geriatric services at a community hospital. Perdue holds a Ph.D. in Education Administration.

More which explores this potential authoritarian threat to our Popular Sovereignty may be read at Flopping Aces and at Noisy Room.  Notice how the Flopping Aces article places it into a series of alarming federal (if our national government may still be called federal) moves and even transnational ploys.  Why, it is almost as if a plan were envisioned and a goal sought. Does anyone know of any goals out there, for “progressing” beyond our constitution and our national sovereignty?

3. Listen to what Rush Limbaugh had to say about a potential suspension of elections yesterday (Friday, September 30th) presented here, from Obama Release Your Records.

4. And here is the Judi McLeod article to which Limbaugh referred.

A dangerous new chapter is being written in American history that, if successful, is destined to impact the history of the West. It’s called ‘Re-Election by Suspended Election Revolution’

Warning: The threat of suspended elections is real 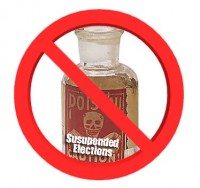 [Gulag Note: an excerpt from the middle of the article.]

This is Obama’s well-stocked position at a time when only suspended elections would guarantee his re-election.

North Carolina Gov. Bev Perdue was not joking when she spoke about suspending elections.  Nor did she pick the idea out of thin air.  Perdue was giving the suspend-congressional-elections idea its first oxygen for her hell-bent-for-leather boss.

It is crucial to not let this day go down without remembering what Perdue said.

Don’t let the state-controlled mainstream media lure you back to sleep by saying if there is no election, then why is Obama so diligently campaigning.

Obama is not campaigning. He is preparing for Stage Two of the Total Transformation of America, using taxpayer money to prepare his Internet-identified “troops” for the coming Marxist Revolution.

He must not be allowed to get away with it. Patriots should now be doing everything legal to stop him in his tracks.

Nothing is impossible when all the control is held by a tyrant.

5. Okay, I am calling you on it. Did you really read that Flopping Aces article? It is called, “UPDATED: Connecting the dots on Obama’s Council of Governors“ and written by MataHarley. Here, let me excerpt that for you too. This is nothing to be lazy about, dive in.

As with most government powers, there is always the potential for abuse. In this case, there is cause for serious concern because every bit of this entails expanding traditional Command in Chief powers to the DOD, spreading troops around the US (potentially not American troops at that…) and deciding who has ultimate tactical command over reserves and Guard in the event of “emergencies”, terrorist attacks, or natural disasters.

Since we can’t expect much in clarification from this transparent administration, it’s up to us to sort out the intent, and inherent dangers to our founded Republic. And we sure we don’t need yet another head scratcher, like Obama’s INTERPOL executive order before Christmas. So I’m here to connect a few more dots on the Council of Governors.

A SERIES OF EVENTS LEADING TO EXPANDED DOD POWERS

The Council of Governors is not a complete bolt out of the blue, but another step in a series of events. The first recommendation of the Council came in a May 2007 commissioned report on the National Guard and Reserves by Arnold Punaro. The review noted that the Guard was short almost $40 bil in supplies and equipment due to committments since the 911 attack, and that individual governors had been “slighted”. The commission recommended a creation of the Council of Governors so that “… governors could provide direct input on National Guard issues to the executive branch.”

Month’s later, it’s creation was mandated by Congress, with no specific timeline to do so, via The National Defense Authorization Act for Fiscal Year 2008. This was a bill first introduced by Ike Skelton in the House Jan 2008, and sailed thru both chambers with almost unanimous bi-partistan support. It was signed into law Jan 28th, 2008 by then President Bush, and became Public Law No: 110-181.

President Bush never created the Council, and neither had President Obama… until yesterday, that is. The question is, did Obama create this council for it’s original purpose? From what I’ve put together so far, it’s not looking that way. Keep reading. 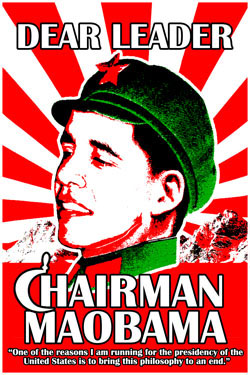 6. But really? Is this not just paranoid conspiracy theory? Back on March 20, 2009, I attempted to answer that question by exploring the question of whom Barack Obama and his inner circle really are, by the evidence one may see, and what people with their ideology have so infamously done in the recent past.

That article is “Our Next ‘Generated Crisis’ — by the Soros/Obama/Pelosi Insurrection?” (and I see the subject was beaten over and over again from different angles, like “The Movie Monster that Wouldn’t Die”). To keep this present article short and crisp, no excerpt is offered, just the link and re-offer of it.

Note: I see this article in my now less active blog, Investigating Obama is triggering malware alerts at present (surprise?) but I have seen no problems after repeat visits and views and doubt a reader would, either. Please let me know at [email protected], if you do.

Last year’s dictadura moves of fellow client of Billy Ayers, Hugo Chavez, underscore the issue. See more about that in Gulag Bound for a refresher.

We, the awake and aware have had to do a great deal of unlearning and relearning in the last few years. Let us not stop learning now, as the threats to our Popular Sovereignty and constitutional republic increase.

And let all who have sworn an oath to uphold and protect The Constitution for the United States of America, and have thus been entrusted with power do so, not go back on their word — to their own peril. I leave it to you, to envision how such events would play out.

A reward for those who have followed the entire exercise and read the attached articles, don’t forget to turn up the volume: