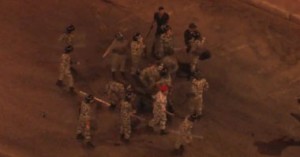 Voice of the Copts strongly condemns the barbaric attack by Muslims on the Marinab Coptic Church located in Edfo, Aswan, in Upper Egypt, which resulted in its complete destruction while the military stood by and watched.

Furthermore, we strongly condemn the brutal attack by military police on Copts protesting peacefully in front of the Maspiro TV and radio building. The current military’s authorization of the attack clearly indicates that the Mubarak regime is still in place in Egypt. Mohamed Tantawy who served Mubarak for almost twenty years has compromised his current position as leader of the military council for the sake of Salafi and the Muslim Brotherhood in order to protect his own interests gained under Mubarak. This new Egyptian dictator continues the Mubarak era of treachery.

The entire world has seen how the Egyptian Nazi-style police force attacked Christians standing in the construction site of the Omranya Church late last year. Furthermore, recent information from the trial of El-Adly, former Internal Minister, shows the involvement of former Egyptian authorities in the attack of the Saints Church in Alexandria early this year when dozens of innocent people lost their lives leaving worship service. Instead of justice for those innocent victims, we see the interim military council, in charge now for ten months, continue to carry out and condone the same terror activities.

The Egyptian military police stood by watching the attack against the Israeli Embassy as well as the Marinab Church in Upper Egypt without intervening. This same military aggressively perpetrated a separate attack against Copts protesting for equal rights in front of Maspero, firing live bullets into the crowd.

The interim military regime is lawless and detrimental to the well-being of citizens who are made to fear for their lives and work to protect their homes and families. The current situation for the Copts of Egypt is highly volatile and now, more than ever, demands the attention of the entire international community.

Voice of the Copts calls upon all nations and NGO’s concerned with human rights to activate political channels and military power if need be to protect more than 18 million Copts from religious persecution in what seems to be a plan to cleanse the true Egyptians from Egypt.