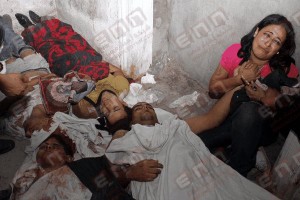 In light of the current attack upon Copts protesting in Cairo where 36 Copts were murdered and many more injured by Egyptian military forces together with Muslim militants, Voice of the Copts is appealing to the international community for immediate help.

Beginning at 3:30 in the afternoon on Sunday, Oct 9, in Shubra district of Cairo, more than 100,000 Copts and some Muslims marched peacefully together for more than two miles toward Tahrir Square shouting slogans in protest of the Muslim burning of Marinab Coptic Church in Edfo in Upper Egypt a few days earlier.

During an orderly approach by Copts to the Maspiro area, Muslim groups began throwing stones and malotov cocktails at the crowd of protesters. The military began shooting live bullets into the protesters and then drove speeding armored cars and tanks directly into the crowd. Meanwhile, Copts were unable to get to safety because they were held back by Muslim militant criminals released from jails earlier this year by the former Mubarak regime at the beginning of the revolution.

The apparent cooperation between Egyptian military forces and Muslim groups who gathered to protect army personnel as requested by National Public TV prior to the start of the Copts’ protest, reveals the true nature of Egypt’s interim regime. Lingering attachments to the Mubarak regime combined with Islamic interests spells the beginning of the end for Copts and freedom and justice. Equality under the law is now impossible with what seems to be the real aim of those in power — to annihilate the Copts of Egypt.

Voice of the Copts would like to thank the Muslim citizens who stood in solidarity with the Copts demanding freedom of religion, justice and equality.

Furthermore, Coptic clergy, especially Father Filipert and Father Meytias, are now being intimidated by death threats which indicate that military rulers are plotting to silence them due to their activities among the Coptic population. As a consequence of this and from this point on, we, as Voice of the Copts, deem any murder or accidental death of any Coptic clergy to be nothing less than an assassination carried out by the state.

Voice of the Copts calls for immediate action to be taken by Western governments to protect Egyptian citizens from the violent acts of the Egyptian state military and police force who ignore the law and defy their given responsibility to protect all citizens equally. Military leaders, putting their own greed before the interests of the country and, by doing so, promote Islamic interests, damage any hope of democracy. Field Marshall Tantawi and his henchmen must immediately step down from governing Egypt’s post-revolutionary efforts.