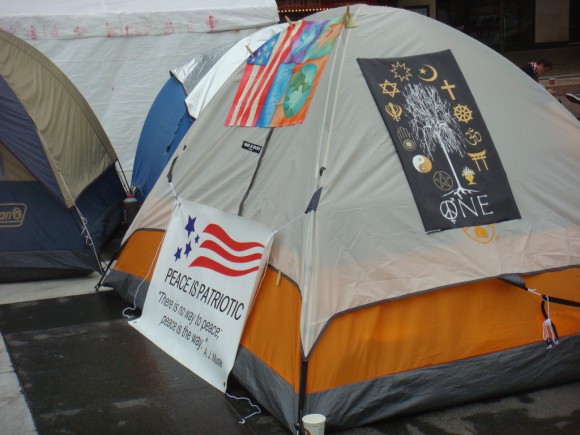 Although he describes himself as new to professional agitation, Trainor runs the “No Cure For That” website and served as a writer/media consultant for Dennis Kucinich’s 2008 presidential campaign. Kucinich is the Cleveland Democrat perhaps best known for proposing a “Department of Peace” for the U.S. Government.

Trainor was calm during my interview. But he was yelling and screaming “Occupy” during one of his early speeches to the crowd at Freedom Plaza, which is U.S. National Park Service property. “I am here until it is done,” he proclaimed. He has produced a video insisting that President Obama, like Libya’s deposed ruler Moammar Gaddafi, is “unfit to lead” and “disconnected from reality.”

Perhaps Obama should rethink his praise of these protesters. Or perhaps the President’s plan is to use them for his own purposes.

The protesters have made a mess of Freedom Plaza and their tents make it almost impossible for tourists and families to enjoy the area of inlaid stone that is usually used for festivals and other civic gatherings. It is against the law for protesters in this area to erect tents, live there and prepare food.

The law states, “Temporary structures may not be used outside designated camping areas for living accommodation activities such as sleeping, or making preparations to sleep (including the laying down of bedding for the purpose of sleeping), or storing personal belongings, or making any fire, or doing any digging or earth breaking or carrying on cooking activities.” 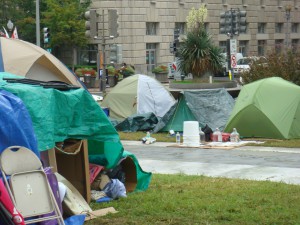 Trainor admits in my video that the tents “are not permitted.” But they have not been removed.

What’s more, in violation of the law, Trainor says the U.S. National Park Service has given them a permit to remain there for the next four months.

Trainor told me that the anti-Wall Street protesters believe they will bring down the government and create a new system based on higher taxes for the rich, free health care for all, an end to wars, etc. It is tempting to laugh at them, except for the fact that veterans of the 1960s protests as well as Soros-funded groups like Think Progress are putting their weight behind these determined Marxists, misfits and crazies.

Pat Garofalo, Economic Policy Editor for ThinkProgress.org at the Center for American Progress Action Fund, has appeared on the Vladimir Putin-funded Thom Hartmann Russia Today propaganda program, as well as on foreign-funded Al-Jazeera. Garofalo is defending the protests against charges that demonstrators are freaks. The “Occupy Wall Street” protest that began in New York City “has sparked an entire movement, based on the principle that the economy should work for everyone, not simply the richest one percent,” he gushes.

It is significant that the protests have support from a Moscow-funded channel eager to depict America as a capitalist economy under siege by its own citizens. The protests make for good global anti-American propaganda.

You may recall that Hartmann, another mouthpiece for the protesters, is the progressive media star who grabbed my camera in disgust when I questioned him about how much money he was getting paid by Moscow.

While Hartmann made a fool of himself, the so-called mainstream media in the U.S. are more sophisticated and not so blatant or stupid about revealing their own agenda of making these protests into something they’re not. Simple research reveals that the protest movement is anything but a spontaneous uprising.

The organizers are long-time activists from the far-left fringes. The Freedom Plaza encampment, with about two dozen tents, has one devoted to media and another concerned with legal help. The old communist-front National Lawyers Guild is supplying the lawyers.

Trainor told me he is a married father of two kids involved in “new media,” that he came down from Massachusetts and is doing a documentary about the protests. He was candid enough to admit that more “seasoned” activists are really in charge.

In October 2008, Morice signed a letter:

Another name from the past involved in organizing the October 2011 movement is Ellen Davidson, whose “30-plus years of activism” includes working with Covert Action Information Bulletin. This is the old anti-CIA publication associated with CIA defector Philip Agee, who became a paid agent of Cuba and died in Havana.

The website of the October 2011 group is quite helpful in determining who is really behind the protests. Financial contributions go to something called the “Alliance for Global Justice,” located at 1247 E Street SE in Washington, D.C. This has been a headquarters for all kinds of leftist groups in the nation’s capital for years. These have included Code Pink, the Nicaragua Network, the Venezuela Solidarity Network, and ANSWER—the Act Now to Stop War and End Racism group. The website of October 2011 specifically asks that supplies be sent to Code Pink at the above address.

Code Pink is, of course, the hard-left organization that includes luminaries such as Medea Benjamin and Jodie Evans, a fundraiser for Obama. When they are not protesting U.S. foreign policy, they are working to undermine Israel.

The Venezuela Solidarity Network, organized to provide support for Marxist Hugo Chavez in Venezuela, has a “steering committee” that includes the U.S. Peace Council, the old Communist Party USA front.

In other words, we are dealing with front groups on top of front groups. It is classic deception and propaganda, designed to rope in the unsuspecting. This is a Marxist movement that is promising confrontation.

Those who think that international communism died with the collapse of the old Soviet Union should take a hard look at who is behind these protests. For the most part, we have the same old names and the same old faces. The younger ones are mostly dupes.

Meantime, ordinary Americans are starting to have their fill and are demanding that the police clear out the protesters.

In Boston, where police officers reported being spit on by some protesters, Police Superintendent William Evans gave the “Occupy Boston” crowd two minutes to disperse from a public park and began arresting them when they did not comply. The police noted that the demonstrators had created public safety hazards and engaged in disorderly conduct.

In D.C., they have disrupted the National Air and Space Museum and the Hart Senate Office Building. One of the protesters that was arrested and hauled away by police was the aforementioned Dennis Trainor. However, he was quickly back to Freedom Plaza in the special media tent.

Despite the four-month deal with the Park Police to remain at Freedom Plaza, the demonstrators have announced, “Freedom Plaza Is Now Ours. And we’re never giving it back.”

A posting on their website says, “We have not said that when the four months are over and the American Spring is here we will leave. In fact, we intend to make it possible for anyone to visit D.C. with free accommodations. Just bring a sleeping bag and agree to work with us to pressure Congress, the White House, K Street, the Pentagon, and all the lobbyists and profiteers for peace and justice. We have free food, we have free drink, we have free trainings and seminars, we have tents, we have peace keepers, we have a big victory under our belts, and we welcome all peace makers for they shall inherit Freedom Plaza. We own it. It is ours. It shall remain ours world without end.”

It is apparent that the U.S. National Park Service officials, who answer to federal authorities, including Obama, have made a calculated decision to let these protests build in Washington, D.C. They have been given special rights over the rights of ordinary law-abiding citizens to enjoy their national parks and monuments.