With the exception of Rep. Darrell Issa (R-CA), no one from the GOP side of the aisle seems to really care about the crimes that have been and continue to be committed by Obama and his syndicate.  Instead, Congress–itself–has established its own unconstitutional “Super Congress” of twelve which essentially does away with representation of We-the-People.  Does anyone still remember “taxation without representation” that sparked the first “Tea Party?”  In this way, Congress is either joining the Obama dictatorship or has formed its own totalitarian challenge to it.  Either way, both Obama and the US Congress have now established their own versions of anti-Republic government.  Like all petulant and/or undisciplined children, they will continue unless we–the adults–stop them.  The Obama syndicate crimes, however, are escalating at a frightening pace.

The Most Criminal Regime in US History

The Obama-led administration (aka the Obama syndicate) appears to be–by far–the most rogue and lawless (by design and original intent of the perpetrators) ever attributed to “leaders” of the United States Government.  This regime refuses to follow–let alone uphold–any US law (including Constitutional law) that it doesn’t like; specifically those that would stop its purpose of completely overthrowing and destroying the US Republic.  Note:  It is being affected–with vigor by our oppressors–as I write this. 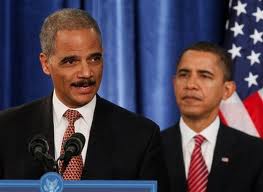 Two huge scandals with likely provable criminal intent and application by Obama and his syndicate have been exposed.  Bear in mind there are dozens of others, which I have covered in previous columns.  Most recently, however, Holder and Obama were caught with their proverbial pants down regarding the Obama-ordered “Operation Gunwalker:  Fast and Furious” program.  The program was set up and implemented with the sole intention of blaming US citizens for gun traffic to the Mexican drug cartels and, then, placing restrictions of the US Constitution’s Second Amendment.

An unarmed population is a submissive population.  In reality and fact, however, the Obama government actually forced US gun shops to sell weapons to drug cartel members and this same ObamaGov actually and clandestinely partnered with the Sinaloa drug cartel!  In an 8 October article, Los Angeles Times reporter Richard A. Serrano wrote:  “These Fast and Furious guns were going to Sinaloans, and they are killing everyone down there,” said one knowledgeable U.S. government source, who asked for anonymity because of the ongoing investigations. “But that’s only how many we know came through Texas. Hundreds more had to get through.”

“Torres Marrufo, also known as “the Jaguar,” has been identified by U.S. authorities as the enforcer for Sinaloa cartel chieftain Joaquin “Chapo” Guzman. The Fast and Furious weapons were found at one of Torres Marrufo’s homes April 30 when Mexican police inspected the property. It was unoccupied but “showed signs of recent activity,” they said.”

Question:  Were there also kickbacks to Obama & Co by the drug cartels?  Considering what has occurred, the question is a highly legitimate one and should be asked by members of the “mainstream“ media.

One of the central problems with Fast and Furious is that it was established by Obama in 2009 and the media refused to report on that fact then–and still refuses to do so now.  For months, I have been reporting on a 24 March 2009 C-SPAN2 video made of Deputy Attorney General David Ogden, in which he identifies Obama and Holder as the driving forces behind the “Gunwalker“ (then called “gunrunner“) program and calls it “a new and aggressive plan.”  The video, until recently when it was finally mentioned on another conservative site, was ignored and still appears to be ignored by most of the US Congress.  This Obama-Holder program caused the death of, most notably, USBP Agent Brian Terry and countless Mexican citizens.  Recently subpoenas were prepared to be sent to US Attorney General Eric Holder for him to again testify before the House Judiciary Committee.  However, in a move that sounds suspiciously like the movie “Wag the Dog,” Holder chose Tuesday 11 October to announce the thwarting of an Iranian plot to assassinate the Saudi Arabian Ambassador (arrests were made in September) within the confines of the USA.  An attempt to divert or at least cool down the negative attention surrounding Holder’s patently criminal activities?  You decide. 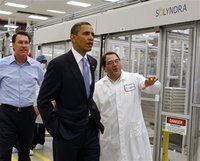 Then, of course, there are the money laundering and “redistribution-of-stolen-taxpayer-money-to-the-Marxist-Democrats-and-their-friends” slush fund ventures.  Note:  Recently, even Rush Limbaugh noted this money laundering.  The way you ask?  Why…Green Energy projects!  Bogus “environmentalism” and “green projects” are merely Marxist inventions (environmentalism is mentioned as a conquest-of-the-people tool in both the Communist Manifesto and Communist Goals [for America] 1963) to steal from the middle and lower classes and “redistribute” to the ruling classes.  And, Obama is doing it.  Solyndra is a prime example of this and there are more of these fake companies on the way as Obama continues to ignore his uncovered crimes and to fund (with taxpayer money) even more ludicrous “green energy” shell companies in order to fatten his and his friends wallets and purses.

Suffice it to say, all of the Solyndra executives have claimed the Fifth Amendment and refuse to testify (or at least answer any posed questions) before Congress.  The company received over half a billion dollars in ObamaGov loans and–guess what–the California Democrat Party is listed as one of its creditors (not the US taxpayer from which the money was appropriated) and will be paid if there is any money to be found!  Note:  I suspect it has been well-hidden.  Obama’s hands are all over this one, too.

To say that the Obama syndicate is the most corrupt and criminal in US history is to minimize what it is actually doing.  Obama and his band of Marxist-Leninist marauders are doing no less than overthrowing the country–and they have been affecting it since they usurped power.  As I have been writing for years now, the Obama regime is completely lawless.   Yet, Congress has done little to nothing to stop him.  Instead, its members strongly seem to have joined him in his efforts.  Unless we rid ourselves of all of the traitors–on both sides of the aisle–and place strict Constitutionalists in office the USA will not be revived.  And until we remember and again openly recognize who placed us here, We-the-People will continue to be even more forcibly  enslaved.  It is what it is.

Isaiah 3:5  “And the people shall be oppressed, every one by another, and every one by his neighbour: the child shall behave himself proudly against the ancient, and the base against the honourable.”

Jeremiah 33:3  “Call unto me, and I will answer thee, and show thee great and mighty things, which thou knowest not.”

The Iranian Terror Threat:
at http://www.humanevents.com