Supporters of marriage are needed for an online research study concerning communication messages about how marriage is defined within the United States.

Share your opinions by Nov. 1. Click here to take the survey, or copy and paste this link into your browser: http://pennstatecomm.qualtrics.com/SE/?SID=SV_5q0jBQGKH2DXFWs

The survey takes less than 15 minutes to complete. You are eligible to participate if you are at least 18 years old.

This research study is being conducted as part of a doctoral dissertation at The Pennsylvania State University. It is NOT funded or commissioned by any political, religious or advocacy organization. If you have questions about this study, please contact Pamela Brubaker at [email protected].

As the U.S.-led Afghan campaign lurches into its second decade, the country’s vast untapped mineralogical resources are again emerging in the Western media, seemingly underpinning the benefits of International Security Assistance Force troops “staying the course” and defeating the insurgency, after which these resources can be tapped, both providing the administration of Afghan President Hamid Karzai with a source beyond drugs for reconstruction and Western companies who develop the reserves a handsome profit.

The latest discovery is that Afghanistan is rich in rare earth elements (RREs). China currently has a near monopoly on the global production of RREs, and the price for a ton of unprocessed ore has soared to a dizzying $100,000 a ton.

So, what’s wrong with this picture?

Western venture capitalists should consider the following points before whipping out their checkbooks to underwrite any mining projects.

First and most obvious, Afghanistan has been in a civil war for thirty years, with Western forces intervening only in the last decade. The country is torn by tribalism and religious divides and Karzai’s administrative control is largely limited to the larger cities. Mao Tse Tung in his 1947 work “The Present Situation and Our Tasks” wrote, “Concerning attacking cities, resolutely seize all enemy fortified points and cities that are weakly defended. At opportune moments, seize all enemy fortified points and cities defended with moderate strength, provided circumstances permit. As for all strongly defended enemy fortified points and cities, wait until conditions are ripe and then take them,” a strategy the Taliban are apparently following to the letter, unconcerned with election cycles and opinion polls. The Taliban know that they have time on their side – as one Taliban commander told a U.S. military officer, “you have the watches, we have the time.”

Secondly, the administration of Karzai is increasingly viewed by the Afghan population as illegitimate, foisted on them by foreign forces, and extremely corrupt to boot. During the August 2009 presidential election, Karzai, in an election reported by foreign observers as riven with fraud, received less than 50 percent of the popular vote, triggering a runoff. Two months later, after Karzai agreed to a runoff election, tentatively scheduled for 7 November, but five days later his main opponent Abdullah Abdullah withdrew and Afghan officials canceled the election, leaving Karzai in power for a second term, despite the provisions of the Afghan constitution, alienating many Afghans from democratic principles.

Third, Afghanistan’s rich mineral base has been known for a long time. Following disastrous December 1979 Soviet invasion, extensive Soviet exploration in Afghanistan produced detailed geological maps and reports that listed more than 1,400 mineral outcroppings, along with about 70 commercially viable deposits. The USSR subsequently committed more than $650 million for resource exploration and development in Afghanistan, which included a smelting complex for the Ainak deposit that was to have produced 1.5 million tons of copper per year. In the wake of the Soviet withdrawal a subsequent World Bank analysis projected that the Ainak copper production alone could eventually capture as much as 2 percent of the annual world market. Afghanistan’s Hajigak iron deposit, in the Hindu Kush mountain range west of Kabul, is assessed as one of the largest high-grade deposits in the world.

As for the recent announcement about gigantic deposits of rare-earth metals, including lanthanum, cerium and neodymium, being discovered in Afghanistan, it is worth bearing in mind that the U.S. geologists who surveyed the sites were airlifted by Black Hawk helicopters to the Khan Neshin Village in a desert area of Helmand Province, where they worked under military protection. If such deposits are to be developed, then given the lack of security forcing geologists to be airlifted to the site, then how is the mining infrastructure to be conveyed?

Fourthly, the stupendous rise in RRE ore prices has led to a frenzied search for deposits around the world, from Estonia to Mongolia, some of which will doubtless pan out. Given Afghanistan’s instability, why would an investor risk his capital there, especially when neighboring Central Asian nations like Mongolia represent a far more stable and investor-friendly environment? Mongolia recently signed off on a massive $7 billion mining project, allowing Rio Tinto and Ivanhoe Mines a majority 67 percent share.

While Afghanistan’s mineralogical potential is vast, the country’s crippling economic and insurgency problems remain, and it’s worth nothing here that despite the 2010 joint report by the Pentagon, the U.S. Geological Survey and U.S. Agency for International Development that Afghanistan possesses “previously unknown” and untapped mineral reserves worth up to $1 trillion, two-thirds of Afghanistan’s population live on less than $2 a day.

So, even though Afghan Ministry of Mines adviser Jalil Jumriany said of the RRE discoveries, “This will become the backbone of the Afghan economy,” the question, not only for foreign investors but the Afghans themselves remains, “qui bono?”

There are no clear answers emerging to this question from Kabul anytime soon. 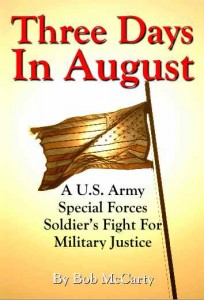 I urge all our readers to purchase a copy and get copies for your friends. Here’s what you are in store for:

U.S. Army Special Forces Sgt. 1st Class Kelly A. Stewart admitted to having a one-night stand with a 28-year-old German woman the night of Aug. 22, 2008. She did, too. Both knew sex was part of the plan when they left the discotheque near Stuttgart. Two months later, however, her story changed and the highly-decorated combat veteran found himself facing rape and kidnapping charges.

During court-martial proceedings one year later, Stewart faced an Army court-martial panel comprised of soldiers who had recently returned form a 16-month deployment with the Army attorney serving as Stewart’s lead prosecutor.

Despite a lack of both physical evidence and eyewitnesses to the alleged crimes, it took only three days for the panel to find Stewart guilty of numerous offenses — including aggravated sexual assault, kidnapping, forcible sodomy and assault and battery — and sentence him to eight years behind bars.

Incredibly, the conviction was based almost entirely on the testimony of Stewart’s accuser, a one-time mental patient who, with the backing of the German government, refused to allow her medical records to be entered as evidence.

When several witnesses came forward during a post-trial hearing to reveal startling proof that the accuser had lied several times during the trial, their words were largely ignored by the court and Stewart remained behind bars.

Today, Stewart’s fighting for a new trial so he can shed the “sexual offender” label that will stay with him the rest of his life if justice remains out of reach.

Based on extensive interviews and never-before-published details taken from the actual Record of Trial, Three Days In August: A U.S. Army Special Forces Soldier’s Fight for Military Justice by Bob McCarty paints a portrait of military justice gone awry that’s certain to make your blood boil.

Coming in eBook and print versions. Look for it at booksellers everywhere Oct. 19.

Make sure you get your copies for you, family and friends..

Move over, operation Fast and Furious.

The United States government has been in the crime development business for years.

So says the other Napolitano, Judge Anthony.

On Fox Business, Andrew Breitbart breaks the news that Big Government has obtained and will release e-mails that prove the organized plan behind the “Occupy Wall Street” protests.

Read the details at Big Government.

The Email Archive of the #OccupyWallStreet Movement: Anarchists, Socialists, Unions, Democrats and Their Plans

We are sharing the email archive because we believe the public needs to know the hidden agendas behind the Occupation–the socialist, anarchist, and other agendas that have not been reported in the mainstream media.