One candidate whose candidacy would be substantially elevated by a more universal embrace of the tea party movement is that of Texas Governor Rick Perry, whose conservative credentials were largely unchallenged prior to his entry to the race. But tea party and Republican support for Perry has fallen substantially since September.

The fall has been steep. A September 20 Gallup poll of Republican voters showed Perry leading all Republican candidates, with 31 percent support (seven points higher than that of former Massachusetts Governor Mitt Romney). However, three weeks later, on October 15, Gallup found that Perry’s support among Republican voters had slipped to 15 percent, placing him behind both Romney (20 percent) and Georgia businessman Herman Cain (18 percent).

What accounts for Perry’s slip? Many signs point to a growing recognition among tea party and Republican voters of Perry’s unpopular decision to provide illegal aliens with in-state tuition rates to Texas colleges and universities. “You put in place a magnet to draw illegals into the state, which was giving $100,000 of tuition credit to illegals that come into this country,” Romney told Perry during a Republican Presidential debate last month.

Tea party concerns about Romney’s continued support for the 2008 TARP bank bailouts and a mandated health insurance plan (not so dissimilar from Obamacare) for Massachusetts during his governorship have long troubled tea party activists and, to a large extent, opened the door for possible broad tea party support for Perry and other Republican candidates. But Perry’s handling of issues related to border security and illegals continue to hamper that broad embrace.

Those who may know Perry’s record best–Texas tea party leaders–continue to raise red flags concerning his candidacy. Last month, as it appeared unlikely that Perry was going to support Republican-sponsored legislation that would empower Texas law enforcement officials to check the immigration status of those they detain, Texas tea party leader JoAnn Fleming derided Perry. “Governor Perry’s decided, apparently, that he just needs to keep pointing the finger at Washington D.C., which absolves him of any responsibility,” she said.

Still, Perry’s otherwise exceptional conservative record as Texas governor, combined with his $17 million campaign war chest, offer him an opportunity of recovering tea party support if he can win back his credibility on issues related to border security and illegals. Such a step might begin with him rescinding his support for in-state tuition assistance for illegals and a reversal of his position on empowering Texas law enforcement to assist in enforcing the nation’s immigration laws.

This article by Michael Johns was written originally for Tea Party Insider and is reposted with their permission. 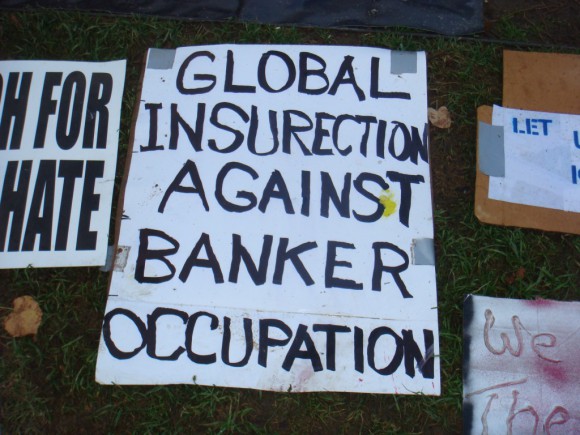 I read the Washington Post article, “Violence and the occupy movement,” expecting to see a discussion of the sexual assaults and rapes being reported during the Wall Street protests. Instead, the author, Susan Brooks Thistlethwaite, writes about “the violence of systems that create and sustain economic and social injustice on a wide scale.” She is apparently talking about capitalism, a system that has lifted more people out of poverty than any in human history.

Brandon Darby broke the story at Andrew Breitbart’s BigGovernment.com that the protests “pose special dangers for women” because of the rapes and sexual assaults taking place. He notes several such incidents:

Also at BigGovernment.com, John Nolte writes about the protesters’ “rap sheet,” which numbers 119 cases of sexual assault, violence, vandalism, anti-Semitism, extortion, perversion, and lawlessness. These are hardly law-abiding protesters, as the lawyers at the National Lawyers Guild and Center for Constitutional Rights maintain.

These incidents are occurring because of the complete breakdown of law and order in the makeshift tent cities of the Occupy movement. Under political pressure, the local and even federal authorities have ceded the space to the protesters, effectively abdicating law enforcement’s role. As a result, when police finally do move into these places, as we saw in Oakland, they are met with violence from organizers of the protests. When the police defend themselves, they are accused of police brutality. This accusation was a prominent charge made in Thistlethwaite’s piece. 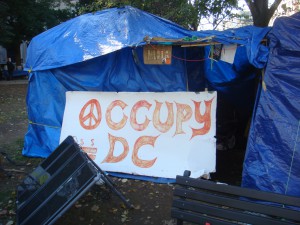 The protests are in fact illegal, since there is no city or federal law which allows tents, food preparation, and other such activities in the cities where they are taking place. Some of the demonstrations have no permits or expired permits. They have made it impossible for truly law-abiding citizens to enjoy these public and private parks.

Everything fell into place when I found Ms. Thistlethwaite’s bio, disclosing that she works at the Center for American Progress, the group funded by billionaire currency speculator George Soros. This is the man who has exploited international financial markets around the globe to make himself rich but now insists that capitalism is a much greater threat to human progress than communism. Isn’t it interesting that at almost every turn, when we examine those making propaganda for the occupy movement, we find the hidden hand of convicted inside trader Soros?

“What we are struggling against in the U.S. is the deliberate creation, especially over the last thirty years, of an economic system that is squeezing out the middle and lower classes, the 99%, and creating a small group of megarich, the 1 percent,” she says in her Post column.

Taking money from a megarich atheist like Soros apparently does not concern Ms. Thistlethwaite, who carries the titles “Dr.” and “Reverend” and is officially the “Senior Fellow in the Faith and Public Policy Initiative” at the Center for American Progress (CAP).

She has a new definition of violence, saying that “violence is the child who goes to bed hungry, and becomes more and more malnourished as child hunger is rising dramatically in our nation.” Perhaps she ought to convince Soros to give his billions to the poor, rather than left-wing progressive non-profit groups that pay their leaders big bucks. CAP itself has an annual income of $38 million. 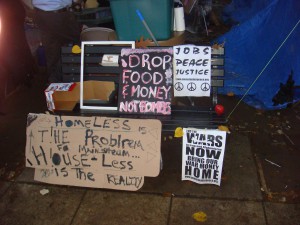 Interestingly, she cites a petition protesting police handling of the demonstrations. She writes, “Faith leaders are uniting to condemn violence by police in a petition from the group Faithful America.” It turns out that “Faithful America” is Faith in Public Life, another Soros-funded group. It got $450,000 from his Open Society Institute in 2009. One year later, it received an additional $25,000 “to expand work focusing on the Catholic community.” Thistlethwaite sits on the board.

In this context, it is significant that Tom Chabolla, the Assistant to the President at the Service Employees International Union (SEIU), is also on the board of Faith in Public Life. He previously served as Associate Director of Programs for the Catholic Campaign for Human Development (CCHD).

Matthew Vadum’s excellent new book, Subversion Inc., has many pages on CCHD, calling it “Alinsky-inspired” and a major funder of ACORN until the revelations about its corruption prompted a cut-off.

Back in 2008, she wrote a column claiming that a member of Trinity United Church of Christ had told her that there were “spies” among them in the pews, “strangers who take notes during the service and try to record the message.” This paranoia reflected concern that Wright’s radicalism would taint Obama’s run for the presidency. It did, although Obama tried to distance himself from Wright with the help of the major media.

What we find, when we further examine her background, is that the U.S. taxpayers have been giving her a platform. Her works include Interfaith Just Peacemaking: Alternatives to War, published by the federally-funded United States Institute of Peace. In other words, Thistlethwaite is now helping to shape U.S. foreign policy.

She is a strange kind of Christian indeed. In regard to the rise of Islamist political parties in Egypt and other countries in the Middle East, she has argued that this “is inevitable and not necessarily all negative.” In Egypt, this has led to the increasing persecution and even murder of Christians.

In her Post column, sounding like Jeremiah Wright, she babbles on about “the institutionalized violence of income inequality” and suggests a solution in the form of a question “…will we exercise the power we have as the 99 percent and find another way?”

This open-ended commitment to something that sounds almost extra-legal is very disturbing, coming from someone claiming to be a religiously-motivated Christian. It is as if she is apologizing for the illegal demonstrations and wants them to continue and move into a new and more dangerous phase. “I believe all of those who are demonstrating around the country at the occupy encampments are getting us on the right track, and causing us to ask the right questions,” she says.

What can be said with certainty is that she ignored the real and actual violence taking place within the demonstrations and “occupations.” It is shameful that the Post would publish such a column in its “On Faith” section.

To demonstrate her Christianity, Thistlethwaite should go to the protests and defend her sisters from rapes and sexual assaults. That would be a demonstration of social justice that actually protects people and saves lives.