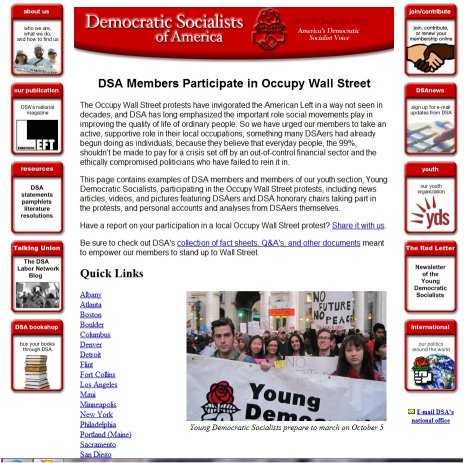 Adding one more to an extensive list of Marxist supporters of Occupy Wall Street, Democratic Socialists of America joined the leftist fray with a page dedicated to the movement today. And why not? They share the goals of chaos and top down, bottom up, inside out that the radical left jointly embraces. They are targeting the young, filling them to the brim with propaganda and then sending them out to their local Occupy Wall Street rallies. An army of useful idiots descends not only on Wall Street, but America as a whole. These are your children, your friends, your neighbors… and they are being sucked into a death trap baited with honeyed phrases of hope and redistributive wealth that in actuality are as poisonous as the apple that struck down Snow White. But this time, there is no prince, just the grim reaper lying in wait to collect as violence, death, hunger and war bloom in America’s streets. Viva la revolucion!

Evidently, the Socialists are here to save the day. Yesterday, I heard about a transaction tax the Democrats are pushing. Guess what the top idea of DSA is? Bingo. Welcome to Conyers HR 870: The Humphrey- Hawkins 21st Century Full Employment and Training Act. Mark my words, this will not create jobs, it will just redistribute more wealth through more taxation and cause more chaos and pain. Which is exactly what DSA and their cohorts want.

DSA is incredibly well-organized and well-funded. And these smooth-talking, slick devils have their game down pat.

Listen to one of DSA’s biggest supporters, Frances Fox Piven of the Cloward and Piven Strategy for destroying America:

Chris Maisano: What have you thought of the protests so far?

Frances Fox Piven: I think they’ve been pretty terrific. And I really am hopeful that it’s the beginning of a new period of social protest in this country. I think a lot about the protest is absolutely on target, it’s so smart. It was so smart to pick Wall Street because Wall Street looms so large not only in the reality of inequality and recession policy, but it looms so large in the minds of people now because everybody knows that they’re stealing the country blind. So they picked the right place, they had somehow — I don’t know how self-consciously, maybe self-consciously — absorbed a kind of lesson from Tahrir Square of staying there, because usually we have demonstrations and marches and parades and things, and they’re over in a nanosecond. And all that the authorities have to do is wait, because they’re gonna be over.

So what they tried to do is take this classical form of the mass rally — they didn’t do it alone, obviously it happened in Egypt too — and connected it with the disruptive potential of mass action because they said “we’re staying.” And “we’re staying” is more troublesome. Not only that, “we’re staying” makes it possible for them to organize and mobilize throughout the course of the action, which is what they do. So that part of it was pretty, pretty smart.

They are smart in being very inclusive. I mean, they’re very happy to include everybody, and they’ve actively reached out to the unions. When has a youthful protest done that in living memory? A very long time since that’s happened. But they knew from the beginning — probably they were helped to learn that from Wisconsin. And they’re so happily counter-cultural, you can’t even get angry at them if you’re a stiff old person! Then you read their statements, I’m sure you do. Well, I do too. And I think they’re very thoughtful for statements issued by a general assembly sitting on the cold cement – they’re very good statements, and they really are statements that include the 99%. So it’s great.

Smart indeed, as the whole idea was cooked up by Marxists like Piven who poured lots of money into coming up with phrasing such as the 99% vs. the 1%. That didn’t just appear out of no where. If was lovingly crafted and staged as all the protests are. It’s an old revolutionary tactic to make things look like they have no organization when they are just the opposite. It’s been used time and again throughout history and now it is being used against America. And none of these dingbats seem to be able to figure out that they are being used. That they are fodder for Marxists who don’t give a damn about them and will cheerfully eliminate them once they have served their purpose. Oh, a purging they will come…

There is no way the Marxists will let this opportunity to ‘remake’ America slide. They hate our form of government, they hate our Constitution and they hate capitalism. Winter may slow them down a bit, but this is Obama’s army of radicals. They won’t stop until they are forced to. DSA is just one face of the an evil hydra leading us into another civil war. Get ready because something wicked indeed this way comes by next spring and summer. Occupy Wall Street and the Marxists behind the curtain have taken the movement national – coming soon to your city or town.

And right on the heels of OWS, look for Van Jones who will be singing a siren’s song that many will fall for. He will try and falsely appear as another Reagan, when in reality what he brings is Communism and revolution. Don’t fall for his words or his promises – among all of them, Van Jones is perhaps the most dangerous of the lot. Whatever you do, stay as far away from Van Jones and these movements as you can get. They will not end well.