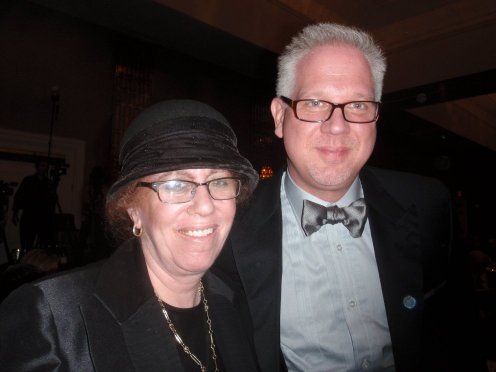 Presented with the first ever Sheldon and Dr. Miriam Adelson “Defender of Israel” award, Mr. Beck was introduced by Mr. Adelson, a gaming industry mogul and a long time devotee of Israel. “In his introductory remarks Mr. Adelson described Mr. Beck as a ”very special man. We knew he was a giant even before we met him. I’d never known a Christian Zionist like Glenn Beck. He tells the truth about the Arab war against Israel.”

Adelson, also the publisher of Israel Hayom (now Israel’s largest daily newspaper), added there is “no greater supporter of Israel in the media today” than Beck. When Palestinians murdered five members of the Fogel family in last March’s Itamar massacre, Beck dedicated an entire show on Fox News to the tragedy and “displayed the pictures that almost every other television network ignored;” Palestinians celebrating the event by handing out candles in the streets, Adelson said.

Noted for his exceptional devotion to Israel and the Jewish people as evidenced in his August 2011 “Restoring Courage” rally in Jerusalem near the Temple Mount and his forthright positions on his FOX television program, Mr. Beck declared that he has placed his “chips on the table” by saying, “I wear it as a badge of pride to be a Zionist. The Jewish people and the land of Israel has a right to exist and I am not ashamed to speak the truth.” Extending plaudits to his hosts and the rich and vibrant legacy of the ZOA as a foremost advocate for a greater Israel, Mr. Beck’s address was frequently punctuated by thunderous applause. Warning of ominous times ahead, he said, “the world is on the eve of profound and dramatic change and we have an 18-month window to change the world.”

Referencing a panoply of issues such as the geo-political realities of the Arab Spring, the burgeoning Iranian nuclear threat, the nascent Occupy Wall Street movement, the danger of George Soros funded organizations, the incessant animus towards Israel emanating from the Obama administration and the prevalent denial of the Holocaust, Mr. Beck issued a clarion call for unity amongst Christians, Jews and all good people by saying, “We must lock arms and stand as sentinels for if we fail to do so things could get worse. I come to you as a brother and not as a Christian. The world does not hate you, but the enemies of G-d hate you. You, the Jewish people never gave up on G-d. You have been loyal and you never embraced the G-d of the stranger and for that Israel has been promised by G-d to the Jews.”

In a voice reverberating with palpable emotion and zeal, Mr. Beck ruefully observed that “what is happening in the world is grotesque,” he declared, “When Ahmadinejad of Iran says the Jews will burn in the fiery hell of Islam, he means it. We must say ‘Never Again’ and we must mean it. Words are meaningless. It is a time for action and only through the mighty Hand of the G-d of Abraham, Isaac and Jacob will we be saved.”

Choked up with tears, Mr. Beck vividly recalled his trip to Auschwitz this past summer and what it meant to him. “I demand to be counted so others will not be numbered. We must tell the truth and we must never forget. We must never repeat the mistakes of the past. Evil will grow again and this evil plant grows in darkness and we must shed a bright light upon it.”

Exhorting his audience to “rely on eternal truths”, he chided the Occupy Wall Street demonstrators as being “just like the fascists that they say they’re against. It is like a formulaic stage play replete with hypocrisy.” He added that the struggles we face for our existential survival are “personal” and that “we must go out as individuals and make a difference.” Borrowing words from Abraham Lincoln, he warned against becoming imbued with vengeance and bellicosity when he said that our mantra should be, “With malice towards none and charity for all” and said that “as the world plunges into darkness, we must be a beacon of light.”

To that end, Mr. Beck made an oblique reference to an endeavor that he is undertaking on December 8th and while what he was eluding to remains nebulous at this juncture he had tongues wagging at the conclusion of his address as audience members engaged in speculation. “Either he is announcing his candidacy for public office or he is planning to convert to Judaism,” said a ZOA member who chose to remain anonymous.

Also delivering a powerful and heartfelt address was Minnesota Congresswoman Michele Bachmann (R) who is seeking the Republican nomination for president in 2012. Telling her audience that her inextricable ties to Israel and the Jewish people originate in her personal religiuos beliefs she said, “It all began in the Book of Genesis which says that ‘Whoever blesses Israel will be blessed and whoever curses Israel will be cursed’ and I stand behind these Divine words.”

Underscoring the pernicious threat of a nuclear armed Iran, Ms. Bachmann said that “all options should be on the table” and did not rule out military force. We must never allow Iran to obtain nuclear weapons and we cannot outsource our national security to the UN.” Taking President Obama to task for his perceived laxity when dealing with the rogue state, she said that he has “given Iran the luxury of time to develop nuclear weapons” and called on the President “to accelerate covert operations and cyber operations in Iran and order the CIA Director to take all means necessary to stop Iran from getting the bomb before it is too late.”

Heaping substantive criticism on President Obama for his less than stellar track record as it pertains to Israel, Rep. Bachmann said, “The president supports the Occupy Wall Street protestors but fails to stand with Israel and that is not an acceptable way of treating our loyal ally. Calling for an undivided Jerusalem recognized by the United States as Israel’s official capital she exclaimed, “On my first day in office I will issue an order to immediately move the US embassy from Tel Aviv to Jerusalem.” Ms. Bachmann then brought the crowd to its feet concerning Jerusalem’s status when she said, “Not one acre, not one foot, not one inch of Jerusalem will ever be relinquished.”

Adding her voice to Ms. Bachmann’s was Congresswoman Ileana Ros-Lehtinen (R) of Florida who was the recipient of the ZOA’s much heralded Cherna and Dr. Irving Moskowitz Award. Introduced by ZOA Board Member Harvey Friedman, he described Ros-Lehtinen as a “national treasure to every Jew in the U.S.” and spoke of her legislative efforts opposing US funding of both Mahmoud Abbas’ Palestinian Authority (PA) and the United Nations Relief and Works Agency (UNRWA). Lauded for the tireless work that she’s done to protect Israel’s interests as Chair of the House Foreign Affairs Committee, Ms. Ros-Lehtinen, a Cuban-American, said, “Let us make no mistake about it. Ahmadinejad has clearly stated that his intentions are to destroy both Israel and America; the little Satan and the big Satan and we must take this very seriously.”

ZOA National Chairman of the Board, Dr. Michael Goldblatt delivered the presentation to Maccabee Award recipients Judy and Jerome Taylor, noting that they had been “long-time pro-Israel activists” who had worked side by side for years on behalf of Israel. He also noted that Judy Taylor’s father had been involved in prosecuting Nazi war criminals at the Nuremberg war crime trials, so that working “to protect Jews was in her genes.”

The recipients of the 2011 Louis D. Brandeis Award were William K. Langfan and his son Mark Langfan, a New York attorney. Introducing the Langfans was Professor Ephraim Inbar, the director of the Begin-Sadat Center for Strategic Studies at Bar-Ilan University in Ramat Gan, Israel.

Speaking about the seminal topographic map that he created, security analyst Mark Langfan took the audience on a spellbinding tour of the perils that Israel would find herself in if Judea and Samaria were relinquished to Arab hands. Pointing to the fact that Israel’s coastal region holds 70 percent of the Jewish population and 80 percent of its industrial base, such a scenario, he said, would inevitably lead to a massive barrage of Katyusha rockets carrying chemical warheads on major population centers including Tel Aviv, Netanya and Hadera.

“Without Israel as the bulwark against the waxing Islamic tsunami to the East,” Langfan said, “there will be a direct Islamic military threat to the very doorstep of Europe. Without Israel, how many trillions–trillions–of dollars will the US have to spend to defend Greece and NATO from such “clear and present” danger to Western civilization? Or, as the Visa commercial would say of Israel’s present-day strategic value to the US: Priceless.”