It’s time for Congress to engage in another “fiscal face-off,” in order to negotiate and agree upon a large “Omnibus Spending Bill,” to avoid a shutdown of the federal government.

First, it must be noted that this ridiculous situation has resulted from the failure of the dominant Democrats, who once again thwarted their Constitutional mandate to create and pass a budget– since 2007–forcing the most powerful and technologically advanced nation on Earth, to operate under a series of “Continuing Resolutions.”

Consequently, as the most recent such measure will expire on December 16th, and several provisions that lawmakers would like to address expire on December 31st, there will once again be a mighty clash between Conservative and Liberal ideologies–due to the bitterly divided government we have had since January, when Republicans took control of the House of Representatives.

To be clear, the Democrats suffered the worst political “shellacking” in the 2010 mid-term elections, losing big holdings in both the United States House and Senate, and affecting their positions and power all the way down to municipal elections–as a repudiation of their extreme “socialist” agenda and shamelessly governing against the will of the [majority] people.

The catalyst for the Democrat devastation was the Tea Party movement, whose mission is to minimize the role of government, lower taxes, eliminate budget deficits and thereby retire our massive national debt, all while promoting job creation in the private sector–all of which is in diametric opposition to the Liberal liturgy.

Headlines today read that Speaker of the House John Boehner (R-OH) will turn to Democrats to avert a shut down, leaving “Conservatives” behind.

This is a reference to the fact that even though the mid-term elections handed Conservatives and Republicans enormous victories, the only segment of the federal government they control is the House of Representatives–the “purse strings” of the government.

But, the operating reality is that the Senate is still dominated by Democrats, and lead by Liberal stalwart Harry Reid (D-NV), effectively leaving Republicans held in a political “checkmate.”

And, this doesn’t even consider the fact that President Obama still wields the “Veto Pen.”

The recent demise of the Super Committee is the most obvious example of this loggerhead, with the problem being that Democrat’s believe that the U.S. has a [lack of] “revenue” problem and Republican’s know that we have a [too much deficit] “spending” problem.

European Union countries have the highest marginal tax rates in the world, which has inhibited the growth of their private sector, according to studies and research conducted by Alan Reynolds, who is a Senior Fellow at the Cato Institute and writes in the Library of Economics and Liberty.

Then, when the sky-high “Value-Added-Tax,” or VAT (European “sales tax”), enters the mix, it is clear to see where the inhibition of growth originates.

And, the last economic telltale is the ratio of a country’s National Debt to “Gross Domestic Product,” or GDP as it is more commonly known, acts as a barometer of financial health and integrity of a country, indicating the distance between prudence and peril for any country. An article in CNN.com, with data taken from “Eurostat” for year end 2010 figures is the source for this article.

Now, a quick examination of all these figures for the several EU countries who have already received a “bailout,” and Italy, reveals the predicament they have gotten themselves into.

First up is Greece, the unwitting “poster child” for the disaster that the liberal ideology has wreaked across the EU, and has received multiple bailout loans in return for implementing [riot causing] severe fiscal austerity measures–drastically cutting government employment and expenses, and more assertive tax collection (not rate raising).

It has a marginal income tax rate of 40 percent, a VAT rate of 23 percent, and a Debt-to-GDP ratio of 143 percent.

Next up is Ireland, who has a marginal income tax rate of 42 percent, a VAT rate of 21 percent, and a Debt-to-GDP ratio of 96 percent.

Portugal, the last country to seek a bailout from the EU and IMF, had to agree to an acceleration of deficit reduction targets, whose main catalyst were budget cuts, including a reduction in the size of government/employment, pensions, and maximum benefit period for unemployment compensation from 36 months to just 18 months–or 78 weeks in current U.S. terminology, to name a few.

Finally, Italy, which has the third largest economy in the EU, had been rumored to be in need of financial assistance; and its numbers ring true, with a marginal income tax rate of 52 percent, a VAT of 20 percent, and a Debt-to-GDP ratio of 119 percent.

So, how does the United States measure up in comparison?

Our top marginal federal income tax rate is currently 35 percent, plus State Sales Taxes range from none in Alaska to 7 percent in Rhode Island and New Jersey, plus there is State Income Tax, which ranges from none in Alaska, Florida and Texas, to a high of 11 percent in Hawaii and Oregon. However, thirteen historically “Blue” states have City Income Taxes, ranging from less than one percent to a whopping 8.5 percent in Washington, D.C.; As to “Red” states, only Birmingham, Alabama (1%), and eight cities in Kentucky (1% to 2%) have income taxes.

The International Monetary Fund has specifically identified entitlement programs, large government and heavy taxation as the primary cause of all debt-ridden country’s difficulties, including the United States–which has also been echoed by the turbulence in the world’s financial markets.

Therefore, as President Obama has proven to be a “bystander in the Oval Office”, as Gov. Chris Christie recently said, and Democrats are staunchly against any reform of entitlement programs, the only way to rescue the United States from the chaos and calamity shaking the foundations of Europe, is to remove the Donkeys and “Rinos” from office in November 2012.

Nuke Update: “China Will Not Hesitate To Protect Iran With A Third World War”

“Once again we are surrounded on every side by those who want to destroy us – and they don’t hide it,” says Rebetzin Esther Jungreis. 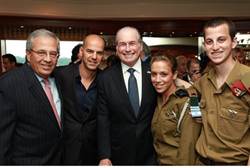 Renowned international speaker Rebbetzin Esther Jungreis warns that once again, “the dark days” are returning and Jews are surrounded by those who want to destroy us — “and they don’t hide it.”

Speaking at the recent Long Island New York Friends of the Israel Defense Forces (FIDF) Dinner, the Holocaust survivor and renowned educator and speaker said it’s very easy to forget what it was like when the Jews were singled out for torture, murder, and slaughter.

“The whole world was ready to consume us, and today… once again, we are surrounded on every side by those who want to destroy us – and they don’t hide it, she noted.

Jungreis bemoaned the fact that Iranian President Ahmadinejad was invited to Columbia University campus by students: “Do you understand this? We are seeing it even with our own eyes. The world has become dark again.” 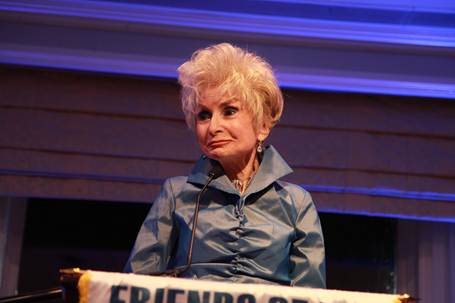 Ahmadinejad has been quoted numerous times as threatening to “wipe Israel off the map.”

The Long Island FIDF this year honored Holocaust survivors “to do something different – to hear what happened in Europe in the Holocaust and juxtapose that to why it’s important to have a strong IDF, so that the Holocaust will never happen again,“ explained Dinner Committee Executive Fred Endzweig, himself from Germany.

The event, held at the Great Neck Country Club, attracted Jews of all stripes and types. “Black hat” religious Jews and those with knit yarmulkas joined the mostly traditional crowd which itself was an even mix of Ashkenazi and Sephardic Jews. 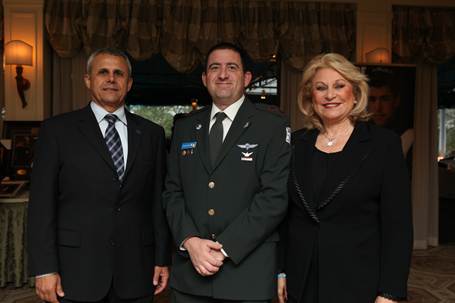 The funds raised by FIDF go towards several projects to help soldiers. “When a combat soldier finishes his military service, he may turn to the FIDF to qualify for an ‘Impact Scholarship,’ which pays his way through college studies,” says Abbey Nickinson, Projects Manager for the organization’s Tri-State region. “The Long Island chapter of FIDF underwrites 55 such soldiers,” she added.

FIDF also equips bases with fitness and recreation equipment. In addition, “Lone soldiers” — those who immigrate and serve without family in Israel — are eligible for assistance in renting and furnishing an apartment.

Despite threats to exterminate Israel, Rebbetzin Jungreis closed her remarks saying that in these days, things are different: “Thank G-d, now we have an Israeli army, and we have a Father in the heavens above.”

Eleven-year-old Natalie Ben Josef, beaming a huge smile at the opportunity to speak into a journalist’s microphone, summed up the evening explaining why she attended the event: “To support the soldiers of Israel.”

Exclusive – The Case of CH2M Hill
$2 Billion in Crony Stimulation

As the House Oversight and Government Reform Committee investigates the handling of over $35 billion in stimulus funding granted to the Department of Energy (DOE) in 2009—a hearing prompted by the failed loan program that funded the now bankrupt solar panel manufacturing company, Solyndra—some fans of the administration are calling for the President to stay the ‘green jobs’ course, citing the potential to add three million more jobs through his latest bill.

President Obama is currently marketing his American Jobs Act, another $447 billion stimulus bill masquerading as a job creation program. “We can’t wait,” has become the mantra of a President and an administration desperate to see the job market reverse course.[3] In order to better understand how money is being utilized, Republicans are trying to retrace the flow of dollars to companies that the Energy Department knew would fail, or rewarded without competition.

Companies such as Solyndra and other alternative energy/environmental investments have at best only been able to produce short-term jobs. In addition to Solyndra, two other companies working on alternative energy products—Evergreen Solar and SpectraWatt—received stimulus funding only to eventually file for bankruptcy.

Job creation in environmental or infrastructure projects only lasts as long as the stimulus funds are available.

Solyndra had been heralded by the Obama administration as a prime example of how the Recovery Act could create new jobs while simultaneously promoting the President’s vision of renewable energy. Once a beacon of solar light in the progressive green jobs agenda, the defunct company had received a $535 million federal loan with the help of newly minted energy secretary, Steven Chu, only to find themselves staring down bankruptcy and the release of more than 1,100 workers.

But that massive loan only tells part of the story. Another company has, and continues to benefit, from cronyism, so-called job funding, and your money.

That company is CH2M HILL.