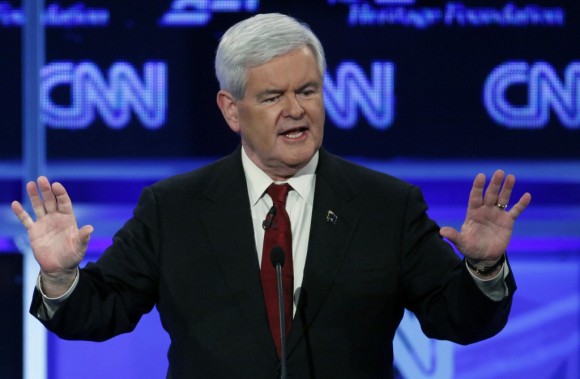 Democrats say they have dirt on Newt Gingrich, but he has the dirt on them. He has accurately described the socialist infiltration of America: “The Left has thoroughly infiltrated nearly every cultural commanding height of our civilization. That is, they hold power, influence and control of academia, the elite news media, Hollywood, union leaders, trial lawyers, the courts, the Congress, and the bureaucracy at all levels of government. They are radically redefining our very culture by deciding what is news, what is entertainment, what our children learn in school, and what kind of government we should have.”

When Gingrich made this charge, the left-wing scandal sheet Politico reacted with alarm, as if Gingrich had crossed the line of respectable discourse. But the publication was not able to rebut his assertion.

Confirmation of Gingrich’s statement, which came in an article about his book, To Save America: Stopping Obama’s Secular-Socialist Machine, has come from an unlikely source—John Nichols, a writer for The Nation magazine. Speaking to the recent Democratic Socialists of America (DSA) conference, Nichols said that the progressive movement is on the move, citing Big Labor’s organizing efforts in several states, and indicated that the 2012 elections will continue this process of revolutionary change.

According to the Nichols book, The “S” Word, America’s socialist legacy included founding father Thomas Paine. The “S” stands for socialism, “an American tradition,” Nichols claims. And this, he said, is America’s future.

But not so fast. Professor Harvey J. Kaye, the Ben & Joyce Rosenberg Professor of Democracy and Justice Studies at the University of Wisconsin-Green Bay, wrote the book Thomas Paine: Firebrand of the Revolution, which is popular with the so-called “progressives.” He says that while Paine had some radical ideas about poverty and government assistance, “He was not a socialist; he did not contest the right of the propertied to their property.”

Indeed, in his Rights of Man, Paine recognized the inalienable rights to property, liberty, security, and resistance to oppression. Private property, which communists want to abolish, was the cornerstone of the American system. America’s founding was a repudiation of socialist ideas.

While Nichols is wrong about the socialism of Tom Paine, his point about the march of socialism in the U.S. is not something that can be so easily dismissed. Nichols’ book, as well as another controversial book, Lincoln’s Marxists, describes the determined activities of socialists in America in the 1800s. They have always looked for an opening to advance their un-American ideas on American soil. Over the last three years, Obama has been their vehicle in the White House.

The problem for Nichols is that, despite his own openness about wanting to be part of Obama’s socialist transformation of America, the effort has used deceptive practices and tactics and associates with sworn enemies of the United States. Nichols says he owes a debt to his late friend, Howard Zinn, a “historian” who concealed his involvement in the Moscow-funded Communist Party until his FBI file confirmed his secret life. The revelations have not caused “progressives” like Nichols to have any second thoughts about their admiration for Zinn.

The socialist-communist alliance, which backed Obama from the start of his political career in Chicago, has been making strides. “Polls tell us that democratic socialism is more popular today that at any time in recent American history,” Nichols says. He cites polls that 20-25 percent of Americans view socialism positively, with the number at 43 percent among those ages 18-29. The polls also find that Americans are increasingly critical of the capitalist system that made America the envy and target of the rest of the world.

Yahoo News noted that pollster Frank Luntz is advising Republicans on how to respond to the coverage generated by the Occupy Wall Street movement and that he is “frightened to death” because “They’re having an impact on what the American people think of capitalism.”

Luntz is referring to the sympathetic coverage of the movement, standing in sharp contrast to the media’s demonization of the Tea Party.

Luntz is telling Republican politicians not to even talk about capitalism being a superior economic and political system. “I’m trying to get that word removed and we’re replacing it with either ‘economic freedom’ or ‘free market,’” Luntz said. “The public . . . still prefers capitalism to socialism, but they think capitalism is immoral.”

This state of affairs requires a media that will tell the truth about how socialists, who are increasingly out of the closet these days and supported by billionaire George Soros, are distorting America’s founding and transforming the United States into something it was never intended to be. It is the struggle that will decide the future of America.

The Gingrich book, To Save America, addresses the subversive role being played by George Soros and other rich liberal billionaires such as Herb and Marion Sandler, who have funded such left-wing media operations as ProPublica. This is the group that just announced a “cooperative newsgathering and reporting arrangement” with NBC owned television stations around the U.S. ProPublica’s “partners” already include such outlets as ABC News, The Baltimore Sun, The Boston Globe, CBS News, CNN, The Huffington Post and public broadcasting’s Frontline.

For his part, John Nichols gives credit in his book to the support given to him by MSNBC, Al-Jazeera, Wisconsin Public Radio, and MSNBC host Chris Hayes, among others.

If the liberal media will not tell the truth, and if the conservative media do not have the ability to make the case for capitalism and freedom, politicians such as Newt Gingrich may have to do so in the context of a presidential campaign. His challenge will be to survive the personal attacks from the machine that he attacks.

For President Barack Obama it’s the bottom of the 9th inning, his team is getting clobbered and although he is at the plate, he has never seen a baseball bat before–however, he has no problem comparing himself to Babe Ruth–which is, in effect, what he did during a “whistle-stop” speech yesterday afternoon.

Osawatomie, Kansas, is a small Midwestern town of about 4,400 people, parked about 60 miles south of Kansas City, where President Obama spoke for an hour, to a crowd in their high school gymnasium.

Obama declared the American “middle class” to be in jeopardy, and in true campaign-style suggested, without actually asking for re-election, that [with him] the country could “reclaim its standing,” but only if everyone had a “fair shot” and a “fair share,” according to an Associated Press article.

The [nameless] author summarized Obama’s stance in this way … “Obama presented himself as the one fighting for shared sacrifice and success against those who would gut government and let people fend for themselves.”

And further, … “He [Obama] did so knowing the nation is “riven” over the question of whether economic opportunity for all is evaporating.”

“Throughout the country, it’s sparked protests and political movements, from the tea party to the people who’ve been occupying the streets of New York and other cities,” Obama said.

President Obama continued, … “This is a make-or-break moment for the middle class and all those who are fighting to get into the middle class. At stake is whether this will be a country where working people can earn enough to raise a family, build a modest savings, own a home and secure their retirement.”

In fact, the purpose of Barack Obama coming to Osawatomie to give his speech, was to “channel” back to former President Teddy Roosevelt, who gave his “New Nationalism” speech here, back on August 31, 1910; but, to a crowd of 30,000, versus the 1,500 assembled today.

President Obama, on the offense, speaking of Republicans, … “Their philosophy is simple: We are better off when everyone is left to fend for themselves and play by their own rules…I’m here to say they are wrong.”

And, [responding] to those who want to cut taxes and regulation in the belief success will trickle down, Obama said: “Here’s the problem: It doesn’t work. It’s never worked.”

Finally, Obama noted that Theodore Roosevelt was called a “radical, a socialist, even a communist,” for putting forth ideas in his last campaign, such as an eight-hour work day, a minimum wage for women, unemployment insurance and a progressive income tax.

Interestingly enough, Obama didn’t bother to reveal that Roosevelt’s Bull Moose campaign failed to return him to the White House in the 1912 election, according to the AP article.

“In the end,” Obama said, “rebuilding this economy based on fair play, a fair shot and a fair share will require all of us to see the stake we have in each other’s success.”

The Obama administration’s take is that Roosevelt’s Osawatomie speech was about a “fair chance, a square deal and an equal opportunity to succeed,” reads a description on the president’ schedule, according to a FOXNews article by Kimberly Schwandt.

Ms. Schwandt also noted that according to the Kansas Historical Society records that Roosevelt’s speech met with wide reaction from the 30,000 people in attendance…including calling them “Communist” and “Socialist.”

Finally, in her article, she quotes Roosevelt who said, “This New Nationalism regards the ‘executive power’ as the steward of the public welfare.”

President Roosevelt’s undoing came about when the “producing” members of society rejected his “Communist Manifesto,” probably because they lived 100 years closer to the hardships and sacrifices endured by our forefathers in birthing our nation.

President Obama has revealed his true stance, illustrated by his arrogant proposition that people are universally ‘entitled’ to own a home, have savings, raise a family and enjoy a secure retirement–this is one form of the “American Dream,” not a guarantee.

There is no such thing as “shared sacrifices” in America, unless you define it as how much time someone like Sam Walton spent away from home and his family, while pursuing his passion of building the largest retailing empire in the world–from scratch, within his own lifetime.

As a result, the Walton’s also became one of the wealthiest families in the world–achieving their definition of the American Dream.

However, Sam Walton created hundreds of thousands of jobs for people all over the country; including my nephew, who made good life choices, got a solid education, started at the bottom rung on the ladder to success, then worked his way up to become the General Manager of his local Wal-Mart store.

As a result, he now owns his own home, has savings, married his high school sweetheart, who is raising their two wonderful kids, and are building for their retirement.

This is the way most American’s view the American Dream, not the “class envy/warfare” proposition; so, just like their forefathers swept President Roosevelt from office in 1912, so will they sweep President Barack Obama from office one hundred years later.