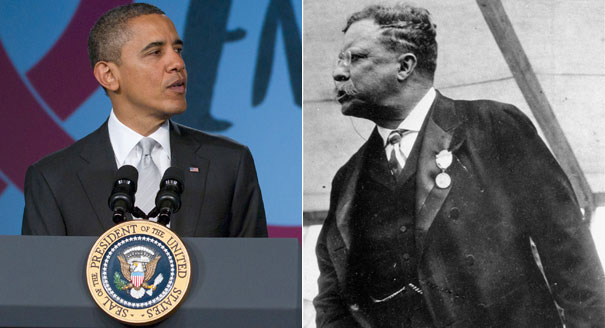 So, now Obama is channeling Teddy Roosevelt… Touting a ‘Republican’ for Progressive values. Key word here – ‘Progressive.’ Hello… Synonymous with ‘Marxist and hey, this oldie but goodie, ‘Communism.’ Obama just slid out of ‘Socialist’ speak, straight into ‘Communism.’ Well, how warm and fuzzy is that? Beck was right again.

I would just like to remind everyone out there that Teddy Roosevelt FOUNDED the Progressive Party. Let’s take a look at sections of Obama’s speech yesterday:

Today, we are still home to the world’s most productive workers and innovative companies. But for most Americans, the basic bargain that made this country great has eroded. Long before the recession hit, hard work stopped paying off for too many people. Fewer and fewer of the folks who contributed to the success of our economy actually benefitted from that success. Those at the very top grew wealthier from their incomes and investments than ever before. But everyone else struggled with costs that were growing and paychecks that weren’t – and too many families found themselves racking up more and more debt just to keep up.

For many years, credit cards and home equity loans papered over the harsh realities of this new economy. But in 2008, the house of cards collapsed. We all know the story by now: Mortgages sold to people who couldn’t afford them, or sometimes even understand them. Banks and investors allowed to keep packaging the risk and selling it off. Huge bets – and huge bonuses – made with other people’s money on the line. Regulators who were supposed to warn us about the dangers of all this, but looked the other way or didn’t have the authority to look at all.

It was wrong. It combined the breathtaking greed of a few with irresponsibility across the system. And it plunged our economy and the world into a crisis from which we are still fighting to recover. It claimed the jobs, homes, and the basic security of millions – innocent, hard-working Americans who had met their responsibilities, but were still left holding the bag.

Ever since, there has been a raging debate over the best way to restore growth and prosperity; balance and fairness. Throughout the country, it has sparked protests and political movements – from the Tea Party to the people who have been occupying the streets of New York and other cities. It’s left Washington in a near-constant state of gridlock. And it’s been the topic of heated and sometimes colorful discussion among the men and women who are running for president.

But this isn’t just another political debate. This is the defining issue of our time. This is a make or break moment for the middle class, and all those who are fighting to get into the middle class. At stake is whether this will be a country where working people can earn enough to raise a family, build a modest savings, own a home, and secure their retirement.

Now, in the midst of this debate, there are some who seem to be suffering from a kind of collective amnesia. After all that’s happened, after the worst economic crisis since the Great Depression, they want to return to the same practices that got us into this mess. In fact, they want to go back to the same policies that have stacked the deck against middle-class Americans for too many years. Their philosophy is simple: we are better off when everyone is left to fend for themselves and play by their own rules.

Oh, there’s a raging debate going on all right… But you are lying through your pearly whites over it. While the Tea Party is a genuine movement of the people of this great nation and the epitome of rugged individualism, Occupy Wall Street is an engineered Marxist ploy to create chaos in the streets so you can have your way with the Constitution and create an emergency that will solidify your iron grip on power over us. Before you were elected, America had the largest and freest middle class in the world. You sir, are actively destroying it for personal gain.

You got us into this depression. You are the one leading the charge to curtail our freedoms. Let’s get something straight here. Let me be blunt. I’m guilty of this too and did not even know it until I found out about our insurance yesterday. Not so long ago, people in America did not just take for granted you would get insurance through work. We didn’t expect our employers to cover us. If we had to get insurance or see a doctor or dentist, we figured it out. It’s another freebie we now expect and it is wrong.

Free benefits and easy credit are like heroin. Our Progressive leaders are more than happy to get us hooked on it. No one owes us insurance or a house or a job or an education. We are free to earn that for ourselves. But to accept just one hit of heroin is to become a slave to the dealer – the Progressives. That is why our parents and grandparents would never take a handout. Get it now? I don’t blame my husband’s employer. I’ll bet he went home last night after telling everyone and felt like hell. I think it costs him about 25k a month to cover everyone and under the new regs, it’s more likely to be 50k. Who the hell can afford that? I feel for the guy – this is not his responsibility. Get over it. It’s ours. If he hadn’t done that yesterday, many people would be out of a job today and that business might have closed it’s doors for good. If there is any blame here, blame the Progressives on both sides of the aisle, starting with Obama.

Well, I’m here to say they are wrong. I’m here to reaffirm my deep conviction that we are greater together than we are on our own. I believe that this country succeeds when everyone gets a fair shot, when everyone does their fair share, and when everyone plays by the same rules. Those aren’t Democratic or Republican values; 1% values or 99% values. They’re American values, and we have to reclaim them.

You see, this isn’t the first time America has faced this choice. At the turn of the last century, when a nation of farmers was transitioning to become the world’s industrial giant, we had to decide: would we settle for a country where most of the new railroads and factories were controlled by a few giant monopolies that kept prices high and wages low? Would we allow our citizens and even our children to work ungodly hours in conditions that were unsafe and unsanitary? Would we restrict education to the privileged few? Because some people thought massive inequality and exploitation was just the price of progress.

Theodore Roosevelt disagreed. He was the Republican son of a wealthy family. He praised what the titans of industry had done to create jobs and grow the economy. He believed then what we know is true today: that the free market is the greatest force for economic progress in human history. It’s led to a prosperity and standard of living unmatched by the rest of the world.

But Roosevelt also knew that the free market has never been a free license to take whatever you want from whoever you can. It only works when there are rules of the road to ensure that competition is fair, open, and honest. And so he busted up monopolies, forcing those companies to compete for customers with better services and better prices. And today, they still must. He fought to make sure businesses couldn’t profit by exploiting children, or selling food or medicine that wasn’t safe. And today, they still can’t.

Let’s talk about Roosevelt, shall we? He started the Progressive movement. He was a Progressive on the right. Progressive equals Communist. Do the math. Roosevelt preached collectivism and was an anti-capitalist. I don’t give a damn which side of the aisle he was on. You might as well go with the Russian Constitution, because the American one is the absolute opposite of what Obama is preaching in the name of Roosevelt. And don’t forget, Roosevelt led to Woodrow Wilson getting elected. If we get another four years of Obama’s Marxist ways, we are kaput as a nation. Done. How I long for Calvin Coolidge.

Fairness for all, equals fairness for none. Can’t people see that? You can’t regulate fairness. A free and open society where you are free to succeed or fail is the only way to prosper. Our founding fathers knew that. Our treasonous leaders know it too. Obama and his toadies have taken the freest and most prosperous nation in the world and have regulated them to death and crushed our Constitution.

In 1910, Teddy Roosevelt came here, to Osawatomie, and laid out his vision for what he called a New Nationalism. “Our country,” he said, “…means nothing unless it means the triumph of a real democracy…of an economic system under which each man shall be guaranteed the opportunity to show the best that there is in him.”

For this, Roosevelt was called a radical, a socialist, even a communist. But today, we are a richer nation and a stronger democracy because of what he fought for in his last campaign: an eight hour work day and a minimum wage for women; insurance for the unemployed, the elderly, and those with disabilities; political reform and a progressive income tax.

Obama’s ‘new nationalism’ will more closely resemble 1930’s Germany and not America. To ‘guarantee’ success, is to ‘guarantee’ mediocrity and slavery. That is the only success that comes of such mandates. Competition and striving to be better is the only thing that produces true success. It is not a trophy for all.

I can’t take it any more. Lie after lie after lie. You can read the rest of the speech here. I suggest you have receptacle handy to vomit in. I choose freedom over nationalism. I choose to be a capitalist over a communist.

The rest of the speech goes on blaming America in general for losing jobs overseas. Actually, Obama’s policies have driven most of those jobs and employers out of the country. Good jobs and a strong economy are created by less taxation, smaller government and, horrors, capitalism. Class warfare, collectivism, wealth redistribution and Marxism are a short road to hell. Set America free Obama! Stop trying to take your ‘square deal‘ and shove it in a round hole.

20 thoughts on “A Square Deal in a Round Hole”