My friends at the Arlington Texas tea party, are launching an online newspaper to cover their area.

Check out the trailer. very professional. can’t wait to read it when they go online!

Move over MSM, truth is on the comeback trail.

Have you ever heard the saying … “Figures never lie–but liars always figure?”

Well, that goes for political polling in particular.

As any Marketing Research expert will tell you … “Garbage in–garbage out,” unless you want to skew the outcome.

For example, let’s say you are the campaign manager for a politician who has racked up a pitiful performance, severely handicapping him (or her) in their race for re-election.

In that case, you hire a polling company, to design a poll with questions aimed toward yielding public opinion results that makes your candidate shine…in some other arena.

Then, you attempt to move the race over to this new “battle ground,” which could most kindly be described as a convenient “Alternative Universe.”

That is exactly what President Barack Obama and his Chicago Gang have been doing–because there is absolutely no statistic available providing a plausible foundation for a second term in office for him–and they know it.

Enter the “Millionaires and Billionaires,” “Pay their fair share,” and “Class Warfare” bumper sticker narratives that were developed, as billboards leading the way to the new arena.

But, more importantly, were the endless weekly polls, which took this basic format … “If you could receive more money from the government, allowing you and your family to have a better life style–would you approve of millionaires and billionaires paying more, “their fair share,” in taxes?”

As if by magic, slightly more than half of the people said it was O.K. to ‘take from the rich and give to the poor.’

Mainstream media then leapt into action and “created” articles and newscasts around this brand new data, supporting the Obama and the Democrats–turning their narratives into slogans for daily use.

Then, when the so-called “Occupy Wall Street” movement was born–some believe that it was actually “manufactured” by Democrat operatives–FOXNews discovered and aired proof that Union and former ACORN operatives were on the sidelines providing management support, money, sleeping bags, food and, as they say … “whatever.”

It was no doubt the White House, directing the Chicago Gang, who applied political pressure on local officials, including Mayor Michael Bloomberg of New York and Mayor–to allow the occupiers to stay put, without police interference, in their clap-trap encampments.

This incredible attempt at conscription, was so Obama and the Democrats could have their own army of “anti-establishment” losers–as a counterpart to the very high profile and influential (November 2010), conservative “Tea Party.”

Once again, legions of pollsters were hired to “manufacture” polls showing public support for these destructive, anarchistic mobs around the country. When they got the figures they were happy with, the compliant mainstream media dutifully turned them into front page articles to spread around the land, Internet and Social Networking sites.

How how is all of this class warfare, socialist Liberal ideology stuff working out for them?

Not well at all.

Even the legions of [typically] Democrat polling firms, helping liars to figure, cannot keep a lid on voter disgust for long, according to a USA Today/Gallup Poll released yesterday (with easy to see graphics), which reported that ever since President Obama took office, ” the percentage of people who “fear big government'” has risen from a low of 55 percent, to 64 percent, two points short of the record level maintained during President Clinton’s entire administration.

In fact, the text of the report says … “Americans’ concerns about the threat of big government are near record-high levels.”

And, as far as the OWS gambit goes, the poll report says … “Additionally, while Occupy Wall Street isn’t necessarily affiliated with a particular party, its anti-big business message may not be resonating with majorities in any party. Republicans, independents, and now close to half of Democrats are more concerned about the threat of big government than that coming from big business.”

So, it would appear that American’s are terrified of the future proposed by President Barack Obama and the Democrats, who are no better at plotting their own re-election strategies, than they were at plotting a recovery for our country.

And, in an interesting irony, much like Obama’s mistake in judgment on the loan to Solyndra Solar–this mistake will be a pretty big “write off” for his re-election campaign, as well. 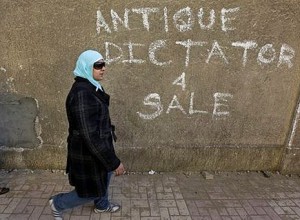 An election in three separate phases (voting days), in three geographical regions spread over a three-month period, was a decision made by the Egyptian Military Council for the purpose of controlling the safety of citizens during the election process. This also allows more opportunity for those in power (military and Muslim Brotherhood) to further manipulate and rig the final results.

The MB and Salafist parties are the declared winners of round one of the elections held on November 28, garnering more than 60 percent of the vote between the two of them.

However, the first of the three-phase Egyptian elections which just took place in nine major cities across the country, consisted of serious obstructions to voting and an overall corruption of the election process as follows (as per sources standing by):

We call upon all free governments of the world to reject the results of Egypt’s current election, deny recognition of the outcome and demand a new election to be conducted under international oversight, so that the achievement and hope of the revolution which seeks a Western-style democracy will be preserved and fulfilled.