The “Consumer Confidence Index (CCI)” is, perhaps, one the most telling leading indicators of consumer sentiment–particularly as 70% of the U.S. economy is driven by consumer consumption of goods and services.

The report is issued monthly by “The Conference Board,” which is an independent economic research organization that surveys 5,000 households to establish the “reading.”

And the number for December is nothing less than breath-taking, coming in at 64.5, much higher than the expected 58.0–a leap up from November’s downwardly revised 55.2, according to a Reuters’ article today.

However, the most important illustration comes from examining a graph representing historical CCI data, which is “benchmarked” at a value of 100.0 = 1985.

It clearly shows that in January 2007, when Democrats took control of the Congress after the midterm 2006 elections, the index began a precipitous plunge, from a value of about 110.0, where it had averaged since December 2001, just prior to President George Bush being inaugurated, down to about 38.0 in January 2009, when Barack Obama was inaugurated. From there the value dropped to about 25.0 by May 2009, then recovering somewhat to hover in a small range averaging 53.0, throughout the Obama presidency.

As the CCI is what is known as a “lagging” indicator, it would seem that it is reflecting a marked uptick in consumer’s view of the future–simultaneously with definitive start of the Republican Presidential Primary race–beginning the march toward the November 2012 elections.

As there still remains a “divided” government in Washington, D.C., and negative news arriving daily that stems from President Obama’s “leading from behind” strategy, the only proper interpretation of this strong rise is that consumers can now “feel” that the end is near, for the socialist-leaning President Obama and his liberal Democrat party. 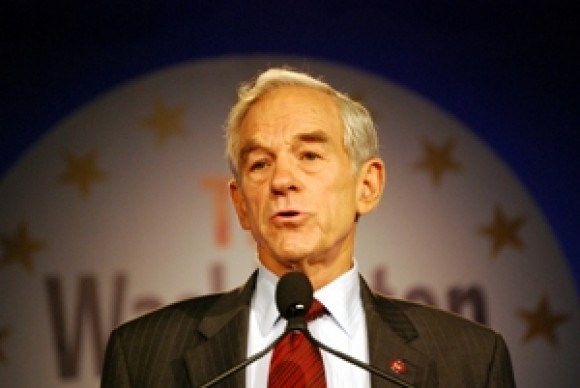 Fox News is the latest news organization to pick up on the revelation, first reported by AIM, that Ron Paul had praised WikiLeaks source Bradley Manning as a hero and patriot. Directly referring to WikiLeaks and Army soldier Bradley Manning being held in detention, Paul said, “Should he be locked up in prison or should we see him as a political hero? Maybe he is a true patriot—who reveals what’s going on in government.” The comment drew strong applause from Paul supporters.

Video of the event, officially posted by Ron Paul’s Campaign for Liberty organization, also shows the Republican presidential candidate, now rising or perhaps leading in the polls in Iowa, attacking the CIA and its treatment of terrorists.

A conservative view of Manning, who had been an Army intelligence analyst in Iraq, was expressed in strong language by columnist Deroy Murdock. He said Manning “should be court-martialed for espionage and treason.” He added, “If convicted, he should be placed against a wall and executed by firing squad” He said the same goes for WikiLeaks founder Julian Assange, if he is extradited to stand trial here.

Manning, a homosexual Army soldier with “gender identity” problems, has just undergone a preliminary hearing which could lead to a court-martial, where evidence was produced showing his collaboration with Assange and WikiLeaks. The charges against Manning include aiding the enemy in violation of Article 104 of the Uniform Code of Military Justice. However, the prosecution team has announced that it is not seeking the death penalty.

Assange is being represented by the Center for Constitutional Rights (CCR) and its president emeritus, Michael Ratner, who has co-authored a book in honor of communist revolutionary Che Guevara. The New York Observer reported that a party to celebrate the book’s publication was held at the Cuban Mission to the United Nations. “Guests passed by a giant portrait of Fidel and a smaller photograph of Che speaking at the United Nations on their way to check their coats,” the paper said.

The CCR, which works hand-in-glove with the National Lawyers Guild, a communist front, is fearful that Assange will be charged by a grand jury with conspiracy to commit espionage against the U.S.

Murdock and others have been critical of WikiLeaks for posting diplomatic cables detailing critical infrastructure and installations, such as pipelines, cable locations, satellite communications sites, and vaccine factories, whose loss could critically affect U.S. national security. “What a perfect target list for those who want to see ‘infidels’ sick or dead,” he wrote.

WikiLeaks also posted technical details of radio frequency-jammers used in Iraq by American soldiers to cut off signals to remotely detonated explosives and roadside bombs. The information released by WikiLeaks could help terrorists figure out better ways to bomb and kill more Americans.

The improvised explosive devices (IEDs) were responsible for many of the 4,287 deaths and 30,182 injuries suffered by American soldiers in Iraq.

An estimate published by McClatchy newspapers in March of this year said that in Afghanistan alone, 617 troops had been killed and 5,752 wounded by IEDs. By this point, it said, the U.S. had spent $17 billion to find ways to disable the bombs.

The Pentagon said it had information from intelligence reports and Taliban public statements “that our enemy is accessing the WikiLeaks website for the purpose of exploiting WikiLeaks’ illegal and irresponsible actions, to pursue their own terrorist aims.”

Pentagon spokesman Geoff Morrell had said in October 2010, “Potentially what one could mine from a huge data base like this are vulnerabilities in terms of how we operate, our tactics, our techniques, our procedures, the capabilities of our equipment, how we respond in combat situations, response times—indeed how we cultivate sources. All of that, [given the] thinking and adaptive enemy we’ve been facing in Iraq and Afghanistan, can be used against us.”

Tom Flanagan, a University of Calgary professor and prominent conservative thinker and activist in Canada, said Assange should be assassinated because of the damage done to international relations. He later said his remarks were “thoughtless” and “glib” and added, “I never seriously intended to advocate or propose the assassination of Mr. Assange. But I do think that what he’s doing is very malicious and harmful to diplomacy and endangering people’s lives, and I think it should be stopped.”

Republican presidential candidate Newt Gingrich called Assange “an active enemy combatant who is engaged in information warfare against the United States. What he is doing is going to have incalculable damage to this country. It is going to have a number of innocent people killed, a number of our allies killed. It is going to put Americans at risk and he has dramatically crippled our ability to gather intelligence because why would any foreigner share with the Americans when they know that their information might immediately show up in some kind of leaked cable. This is an act of war against the United States.”

Even Bob Beckel, a liberal personality on the Fox News Channel, has called Assange a “traitor” who should be shot.

Revelations about Ron Paul publishing racist material in his newsletters is also receiving more media attention. But Paul’s supporters in the John Birch Society, a one-time anti-communist organization, are playing down this revelation, saying that “…the newsletter controversy only demonstrates that Paul exercised poor management over employees’ statements in a relatively minor part of his career (he focused upon his medical practice during this time period), a managerial mistake he hasn’t repeated in the 15 years since he returned to Congress. It’s a genuine negative for Paul, but it’s a small negative.”

The writer of this New American article is ardent Ron Paul supporter Thomas Eddlem, who describes himself as “a life member of the John Birch Society” who “formerly served on the staff of the organization for 13 years.” He once described himself as an advocate of a “Left-Right Alliance” against the George W. Bush Administration and contributes to the left-wing progressive website, OpEdnews.com. His Facebook page lists foreign-funded channels Al-Jazeera and Russia Today (RT) as among his favorite sources of television news. The section on his activities and interests includes WikiLeaks.

His article in The New American, however, did not address the controversy over Paul praising WikiLeaks source Bradley Manning as a “hero” and “patriot.”

However, Eddlem had previously written an article for the magazine insisting that while some Americans see Manning as a traitor, “others see Manning as a whistleblower who has exposed the U.S. government’s absurd and unnecessary over-use of secrecy as well as a number of scandals.”

This seems to be the view held by Ron Paul and The New American/John Birch Society.

The New American has also published a controversial article taking issue with conservative websites such as RedState.com and TrevorLoudon.com that referred to Paul as “Al-Qaeda’s favorite member of Congress,” and highlighted Paul’s collaboration with the Moscow-funded RT channel. RT is a cover for Russian intelligence operations and serves as a mouthpiece for the Vladimir Putin regime.

The RedState article had noted the WikiLeaks disclosure of classified information about possible terrorist targets.

The collaboration with RT apparently ended when one of the channel’s hosts, American Adam Kokesh, was fired after being caught raising money for Ron Paul on the air.

It is illegal for foreign entities to interfere in U.S. political campaigns and the Federal Election Commission is currently investigating the controversy.