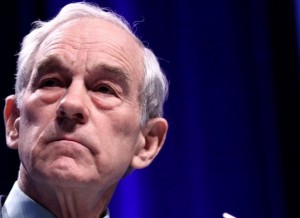 Ron Paul on Gaza, “To me, I look at it like a concentration camp and people are making homemade bombs, and like they’re the aggressors?”

Paul went on to decry America’s support of Israel over the Arab League nations and lets slip his personal opinion that Israel is essentially the villain and that “Palestinians” are their victims.

Ron Paul at 2:04 in the recording, emphasis added:

You know, if Israel has a problem that they have to deal with, I don’t think it should be any of our business. It’s just that it’s our business and we will be blamed because we support Israel blindly, so, and we give them the money and we give them the weapons. That should be the contention that we approach here and Congress should know about and the American People should know about. And then, if I personally favor one side or the other side, it’s really pretty academic, because politically, I don’t want to be involved. I want to say ‘Well, you know I think the Palestinians have been ripped off and therefore all the blame is on Israel,” I’ve sort of stepped in a little bit more than I want to. I can have a personal opinion but politically, my position is that America would be much better off we we just minded our own business and of course I always tie this into the financial calamity that our foreign policy creates.

Reposted from Atlas Shrugs in its entirety. We doubt they will mind, for this short post of links and video.

This interview with Iran’s state-run PressTV ran on January 5, 2009. Ron Paul says that the U.S. should stop supporting Israel, defends Hamas, excuses suicide bombing, and calls Gaza a concentration camp: “To me i look at it like it’s a concentration camp, and people are making bombs, like, they’re the aggressors?” (Video hat tip Jack)

Ron Paul: U.S. Shouldn’t Have Fought Hitler Just to Save Jews From Holocaust