Falling under the heading of much too little and way too late, the big news from the White House today is that President Barack Obama will soon float changes to the corporate income tax laws, in the hope to change U.S. companies’ behavior from outsourcing jobs to low labor rate countries like India and China.

“In the coming weeks, the president will put forward new tax proposals to reward companies that choose to invest or bring back jobs to the United States, and to eliminate tax advantages for companies moving jobs overseas,” the White House said in a statement, as reported by Reuters today.

Now, three years after his inauguration, President Obama believes that he can punch through modifications to the most complicated tax code on Earth, to result in a profound affect on the stagnant, high unemployment rate–before November 6, 2012.

Unfortunately, even if these tax code changes could be legislated and implemented before Election Day–Obama is playing to the wrong audience for two reasons.

First, large multinational corporation’s plans for 2012 have already been solidified.

But, more importantly, small businesses are well known to be the quickest and largest source of new jobs; however, in contrast to Obama’s plan, their income is typically taxed at the personal level, because they use LLCs and Sub-Chapter S Corporations for their businesses–as a result, they will find no hiring incentive whatsoever.

This is obviously another “high concept” idea, conjured up by Obama, and his ever-changing inner circle of advisors, who are equally unfamiliar with how private sector job growth occurs.

Small businesses do not create new jobs as a result of “tax incentives,” but as they need them to accommodate increased sales, which the U.S. economy has not seen in a long time.

President Obama has created another problem for himself, particularly in the small business community–his very public class warfare rhetoric, pro-union and anti-business stance and Obamacare, have all accumulated to “freeze” nearly all business owners in their tracks.

Small business people have [their] “skin in the game,” and know if they make [enough] wrong decisions, they can lose everything they have. This is a “foreign concept” to Barack Obama, because he has always been an employee in the public sector–without any knowledge or experience of how a business operates, and has no understanding about the anxiety of the daily responsibilities that go along with it.

Obama knows nothing about risking his own capital, or mortgaging his family home, to start a company; he knows nothing about hiring employees whose bi-weekly paychecks are his personal responsibility to fund–never mind having the expensive headache of compliance with a growing avalanche of resource-gobbling government regulations, and a litany of profit-killing taxes.

Finally, there is Obama’s seemingly lawless, capricious and divisive partisan behavior, driven by what some would label as a combination of narcissism, liberally sprinkled with schizophrenia from one week to the next, which has created an atmosphere of absolute distrust among businesses.

For example, his recent [illegal] “recess appointments,” when the Senate was in [legal] pro forma session; his fleeing aboard Air Force One, when leadership was the prescription on the eve of important legislation; his inability to retain key advisors in the White House and West Wing; and, the unequalled domestic economic disaster that has fomented under his presidency.

If President Obama couldn’t do better than eek out a “two-month” extension on two pre-existing programs (payroll tax holiday and long term unemployment benefits), during the last three weeks of the year–then how in the world does he expect to get a meaningful corporate tax code deal done in time for it to have any effect on unemployment?

The answer is: He doesn’t expect it to work.

This is simply a plot to add another failure to the “do nothing Congress” defense he has been fabricating–in a desperate attempt to “explain” his complete failure as President of the United States. 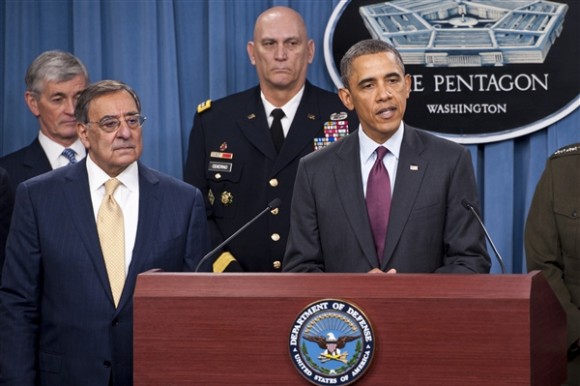 “As President Obama stood on the podium in the Pentagon briefing room Thursday to outline the nation’s defense priorities, the military stood with him,” reported The Washington Post, as if the military brass had any other alternative than to serve as props for the President. Pentagon chief Leon Panetta, who opposed the Reagan defense buildup when he was a left-wing congressman from California, was there as well.

“For a president denounced by Republican rivals as a weak and irresponsible commander in chief, the show of military support (emphasis added) represented a political windfall for Obama as he begins campaigning in earnest for a second term,” the paper added.

Obama’s unprecedented trip to the Pentagon’s briefing room to make the announcement was significant and newsworthy, but there is no evidence that the military officials were there voluntarily in support of Obama’s defense cuts.

On the contrary, there is reason to believe they would not support Obama’s plan. Indeed, The Washington Post editorial page noted that defense spending represented more than 9 percent of U.S. gross domestic product under President Eisenhower and under Obama’s plan would drop from about 4.5 percent to under 3 percent. The paper went on, “Meanwhile, other than cuts to finance the new entitlements in his health care bill, the president has yet to propose meaningful trims in the exploding costs of entitlements such as Medicare, which did not exist during Mr. Eisenhower’s presidency. Would Ike have regarded what Mr. Obama is proposing as ‘balanced’? It’s hard to see how.”

The editorial also noted that the administration “already has cut or canceled 30 weapons systems,” amounting to some $300 billion.

This figure is taken from a speech by Robert Gates, before he stepped down as defense secretary, when he told the American Enterprise Institute (AEI) in May of last year, “All told, over the past two years, more than 30 programs were cancelled, capped, or ended that, if pursued to completion, would have cost more than $300 billion.”

Gates also drew the comparison to Eisenhower, saying, “When President Eisenhower warned of the ‘Military Industrial Complex’ in 1961, defense consumed more than half the federal budget, and the portion of the nation’s economic output devoted to the military was about 9 percent. By comparison, this year’s base defense budget of $530 billion—the highest since World War II adjusted for inflation—represents less than 15 percent of all federal spending and equates to roughly three and a half percent of GDP—a number that climbs to about four and a half percent when the war costs in Iraq and Afghanistan are included.”

Gates’s successor, Leon Panetta, the former CIA director, had a record of opposing weapons systems and military action when he was a left-wing congressman from California. This was Panetta’s record:

Yet, Gates pointed out in that AEI speech, “The Reagan build-up of the 1980s fielded a new generation of weapons platforms that continue to be the mainstay of the force today—the M1 tank, Bradley Fighting Vehicle, Apache and Black Hawk helicopters, Burke guided missile destroyers, F-15 fighters, and much more.”

So Panetta was wrong on the Reagan buildup. But he has apparently not learned his lesson, as The New York Times reports that Panetta favors radical cuts in the size of the Army, even beyond what has been publicly reported, from 570,000 down to 490,000 troops.

Going even further, the Times said that Panetta is expected to propose cuts to next-generation weapons, including delays in purchases of the F-35 Joint Strike Fighter jet.

We were virtually alone in predicting this. We had reported extensively on Panetta’s anti-defense views and his personal ties to radical left-wing forces and Communist Party member Hugh DeLacy.

Panetta has been portrayed in some media as opposed to cuts, even while he unveils them.

But his real attitude toward America’s enemies was on display on the January 8 edition of CBS’s “Face the Nation,” when he said about Iran, “Are they trying to develop a nuclear weapon? No.”

One day later, the International Atomic Energy Agency (IAEA) confirmed that Iran had begun uranium enrichment at a facility in the northern part of the country.

Two days later, the U.S. State Department issued a statement condemning Iran’s decision to begin those enrichment operations, saying it was “contrary to its obligations under multiple United Nations Security Council and International Atomic Energy Agency (IAEA) Board of Governors resolutions…The circumstances surrounding this latest action are especially troubling. Iran only declared the Qom facility to the IAEA after it was discovered by the international community following three years of covert construction. Iran has announced it intends to consolidate and increase its production of uranium enriched to a near 20 percent level at this facility. There is no plausible justification for this production. Such enrichment brings Iran a significant step closer to having the capability to produce weapons-grade highly enriched uranium.”

While Iranian Press TV has showered lavish praise on Paul, it has attacked Santorum for criticizing Iran’s “peaceful” nuclear program.

The Tides Foundation is another George Soros front organization.

Vivian Krause has the story:

Acting in concert, environmental organizations are campaigning against the Alberta oilsands, and more broadly, against the export of Canadian oil. Banning oil tanker traffic on the strategic, north coast of British Columbia, as environmental organizations are demanding, would block exports of Canadian oil to China and other Asian countries. No oil tankers means no oil exports.

In both the U.S. and Canada, a large number of these environmental organizations are all funded by a single American foundation: The Tides Foundation (“Tides USA”).

According to U.S. tax returns for 2009 and 2010, Tides USA has paid a total of $10.2 Million to 44 organizations that campaign against Canadian oil. The top recipient was Corporate Ethics International which runs RETHINK ALBERTA, a campaign to pressure the Alberta government by depicting Alberta in a negative light.

As reported in The Financial Post, in 2009 the U.S. Tides Foundation and Tides Canada funded a total of 36 organizations that campaign against the development of the Alberta oilsands. Of these, 26 organizations were funded by the Tides USA. The total granted to these organizations by Tides USA was $3.6 Million for 2009, according to U.S. tax returns.

In 2009, Tides Canada Foundation paid at least $7 million to 20 organizations that campaign against Canadian oil, according to analysis of Tides Canada’s U.S. tax returns. In 2009, fully half of Tides Canada’s grants went towards projects on a small but very strategic part of the Canadian coastline: the north coast of B.C., right smack where oil tankers export bound for Asia would need to travel.