Generally speaking, George Soros cannot be trusted with anything he says. He is a calculating liar, and not nearly as smart as people credit him.

However, in the following case I agree with him. But this is not because he is making one of his bogus predictions. I believe him because he is instead saying what he expects to happen due to the destruction he, Obama and the others are willfully wreaking in this country. 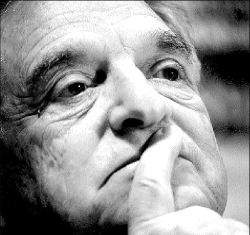 Most people know the name George Soros, the mastermind behind…well, a lot of stuff.

This comes via the Daily Beast.

Sitting in his 33rd-floor corner office high above Seventh Avenue in New York, preparing for his trip to Davos, he is more concerned with surviving than staying rich. “At times like these, survival is the most important thing,” he says, peering through his owlish glasses and brushing wisps of gray hair off his forehead. He doesn’t just mean it’s time to protect your assets. He means it’s time to stave off disaster. As he sees it, the world faces one of the most dangerous periods of modern history—a period of “evil.” Europe is confronting a descent into chaos and conflict. In America he predicts riots on the streets that will lead to a brutal clampdown that will dramatically curtail civil liberties. The global economic system could even collapse altogether.

“I am not here to cheer you up. The situation is about as serious and difficult as I’ve experienced in my career,” Soros tells Newsweek. “We are facing an extremely difficult time, comparable in many ways to the 1930s, the Great Depression. We are facing now a general retrenchment in the developed world, which threatens to put us in a decade of more stagnation, or worse. The best-case scenario is a deflationary environment. The worst-case scenario is a collapse of the financial system.”
[Emphasis added]

Bankruptcy: Not if, but when.

Reminder: President Obama’s State of the Union Address starts at 9 pm EST. He is expected to make his re-election pitch in order to “finish the job.”

“Socialism has no place in the hearts of those who would secure the fight for freedom and preserve democracy.” Samuel Gompers, American Federation of Labor, 1918

From pages two and three of the Daily Beast article, Soros would appear to show the sociopathic, coldly calculating specifics about the chaos he is fomenting, in part through foundations Tides and Ruckus, emphasis ours.

While Soros, whose new book, Financial Turmoil in Europe and the United States, will be published in early February, is currently focused on Europe, he’s quick to claim that economic and social divisions in the U.S. will deepen, too. He sympathizes with the Occupy movement, which articulates a widespread disillusionment with capitalism that he shares. People “have reason to be frustrated and angry” at the cost of rescuing the banking system, a cost largely borne by taxpayers rather than shareholders or bondholders.

Occupy Wall Street “is an inchoate, leaderless manifestation of protest,” but it will grow. It has “put on the agenda issues that the institutional left has failed to put on the agenda for a quarter of a century.” He reaches for analysis, produced by the political blog ThinkProgress.org, that shows how the Occupy movement has pushed issues of unemployment up the agenda of major news organizations, including MSNBC, CNN, and Fox News. It reveals that in one week in July of last year the word “debt” was mentioned more than 7,000 times on major U.S. TV news networks. By October, mentions of the word “debt” had dropped to 398 over the course of a week, while “occupy” was mentioned 1,278 times, “Wall Street” 2,378 times, and “jobs” 2,738 times. You can’t keep a financier away from his metrics.

As anger rises, riots on the streets of American cities are inevitable. “Yes, yes, yes,” he says, almost gleefully. The response to the unrest could be more damaging than the violence itself. “It will be an excuse for cracking down and using strong-arm tactics to maintain law and order, which, carried to an extreme, could bring about a repressive political system, a society where individual liberty is much more constrained, which would be a break with the tradition of the United States.”

See the George Soros tag for the deep information on Soros, including a history of his mayhem, “Top 5 Revolutions Backed by George Soros,” by Lisa Graas.

See the Occupy Wall Street tag for the same on Soros and friends’ backing of that top-down movement, for example, by Bound journalist, Robert Beaudine, with initial comments:

…George Soros helped finance OPTOR, which spawned CANVAS, which trained some choice Egyptian activists who helped the Arab Spring create the void that will be filled by the Muslim Brotherhood. Here in the US, Soros organized and financed the OWS protests… he was behind, well, every regime change taking place. I knew CANVAS was the training center … I wrote about Egypt:

CANVAS provided the necessary training. According to Tina Rosenberg’s February article in Foreign Policy, “Revolution U,” “They have worked with democracy advocates from more than 50 countries. They have advised groups of young people on how to take on some of the worst governments in the world – and in Georgia, Ukraine, Syria-occupied Lebanon, the Maldives, and now Egypt, those young people won.”

Perhaps winning is a relative term like the truth. Eight months after her article appeared, it doesn’t look like the Egyptian people have won anything except a sorry economy.