Following are three news releases by Cliff Kincaid of America’s Survival and Accuracy in Media. Enjoy!

My wife and I are heading into Washington, D.C. for the March for Life against abortion. We have been there many times before. Tens of thousands are expected. I will provide a report on the event. Abortion is a national scandal — more than 50 million dead. 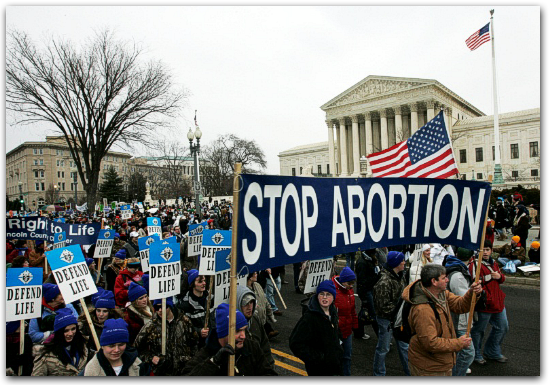 I have written a follow-up column, “The Fox News Feminists,” about the problems at Fox News. It will be posted at www.sorosfiles.com. We have launched a “BRING BACK BECK” campaign to return Glenn Beck to the Fox News Channel. This is our way of highlighting increasing George Soros influence over the cable channel. My first column examined the hiring of Soros operative Sally Kohn. My new column examines Fox News’s hiring of former ACORN operative Jehmu Greene.

The reaction to my January 19 column about Fox News hiring Sally Kohn has been one of shock and surprise at Fox News hiring far-left personnel. Under the headline, “Fox News Hires Soros Subversive,” a reference to Kohn, Atlas Shrugs blogger Pamela Geller wrote, “Unbelievable. Rational voices are continually given the shaft, prohibited from the airwaves, and these agitators and subversives are given respect, salaries and the imprimatur of legitimacy. The right does not have ONE network. Not one.”

Fox News is changing before our eyes, depriving us of the only national network that has given conservatives a voice. Don’t take this lying down. It is time to protest. This is capitulation to Obama and his master Soros.

You can see our ‘BRING BACK BECK‘ ad on the right hand side of the home page of www.canadafreepress.com Take a look. It is directing people to our sorosfiles.com website.

It is terrible what is happening with the Fox News Channel. Please call and email now. Register your protest. Tell Fox to Bring Back Beck in order to demonstrate their independence from George Soros.

BRING BACK BECK: WHAT YOU CAN DO

We have just posted this release. Please distribute to your friends and associates.

Campaign to “Bring Back Beck” to Fox News

A public policy group dedicated to exposing the role of hedge fund billionaire George Soros in Obama’s radical transformation of America is launching a “Bring Back Beck” campaign on behalf of the former Fox News Channel star. An ad for the new campaign can be seen at www.canadafreepress.com, a popular global source of conservative news and information, and advertises a new website called www.sorosfiles.com, a project of America’s Survival, Inc. (ASI)

“Fox News has been disintegrating since Soros-funded groups forced Glenn Beck off the air,” declared ASI President Cliff Kincaid. “His show was replaced by a program featuring Democratic Party hack Bob Beckel, who regularly insults conservatives. It’s time for Glenn Beck, now on Internet TV, to return to the cable channel so that he can continue his investigative journalism into the rapidly expanding influence of the Soros network of organizations. We urge Fox News CEO Roger Ailes to negotiate Beck’s return at the earliest possible date.”

Kincaid noted with alarm that Fox News has hired two left-wing feminist activists, Sally Kohn and Jehmu Greene, both of them affiliated with Jane Fonda’s Women’s Media Center, as paid “contributors” to the channel. “Fox is moving to the left and filling its ranks with the kind of shallow commentators we have come to associate with the little-watched cable channel MSNBC. We know that pressure from Media Matters and other Soros-funded groups is responsible for this shocking departure from the conservative message that made Fox the most popular cable channel.” Soros gave Media Matters $1 million to neutralize Fox’s conservative message.

Kincaid noted that Sally Kohn worked at the Center for Community Change, heavily subsidized by the billionaire, while Greene is an activist who worked with the corrupt ACORN group. “Fox News should be exposing these people, not hiring them,” Kincaid said. They are both “Fox News Contributors,” meaning they are on the payroll making tens of thousands of dollars a year. In addition, Kohn writes regularly for the Fox News website.

Kohn, the latest hire by the “conservative” channel, is actually a lesbian feminist who worked at a Jane Fonda-founded group dedicated to giving “progressive women” a more visible presence in the major media. “Fonda scored big when Kohn was hired by Fox,” Kincaid said. Fonda was known as “Hanoi Jane” for her visit to Hanoi during the Vietnam War and support for the communist enemy killing American soldiers.

The ASI President went on, in regard to Sally Kohn, “She may be the nicest person in the world and friendly on the air, but she is not the kind of role model that Fox News should be presenting to young women across the United States. Lesbianism is not a lifestyle that should be promoted by a national television network, especially one claiming to be conservative. We expected and deserved better from Fox.”

Kincaid noted that the New York Times estimated that Soros gave progressive groups $860 million in 2011 alone. “This amount makes the Koch Brothers look like penny-pinchers,” Kincaid added, alluding to an estimate by the New York Yorker that the libertarian billionaires have given about $100 million to conservative groups. Overall, Soros has given away over $8 billion to anti-American and far-left organizations. “It seems as though Fox News is next on his target list of acquisitions,” Kincaid said, “and he is beginning to get his way.”

He said left-wing groups attacking the Koch Brothers are deliberately diverting attention away from the much-greater influence of Soros, a convicted inside trader with mysterious off-shore sources of cash who is now acquiring influence over the Fox News product. “Fox should stand up to Soros,” he said, “not buckle under to his financial pressure.” He said this trend — together with the reports that Rupert Murdoch, head of the Fox News parent company, News Corporation, is turning the media giant over to his liberal son, James — is worrisome indeed.

The www.sorosfiles.com website includes contributions from Tina Trent and Trevor Loudon and the proceedings of a conference on the topic of the hedge fund billionaire’s increasing influence in the U.S. and the world. Readers can subscribe to a free newsletter advertised on the top of the site.

Kincaid also said his organization will have a booth at the upcoming Conservative Political Action Conference (CPAC) with detailed information on how to expose the Soros power grab at Fox.

On his GBTV show, Glenn Beck mentioned our efforts on his behalf and thanked us. He said he’s doing fine on Internet TV, but the fact is that he could do far more good, especially in regard to exposing Soros, on the popular Fox News cable channel. We want Beck back! He should be rehired.

Here’s an image from his show: 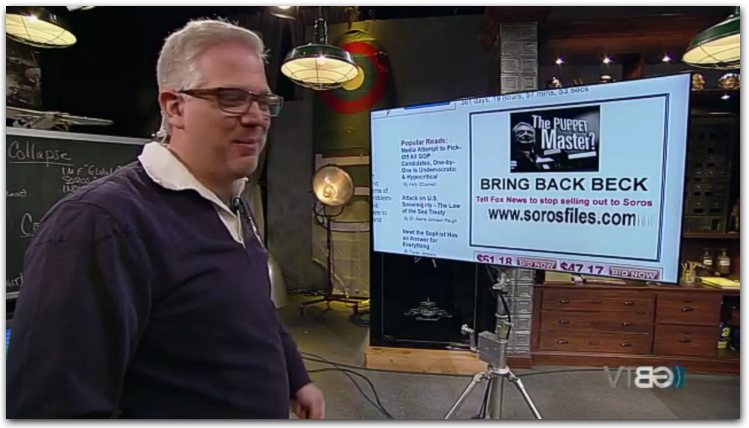 You can see our “Bring Back Beck” ad in the screen shot from the Canada Free Press.

Judi McLeod of Canada Free Press has this article about our efforts:

What others are saying (from GOPUSA.com) –

Please make calls and emails. Tell them to “Bring Back Beck.”

3 thoughts on “The Bring Back Beck Movement”