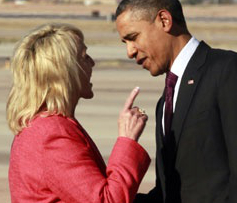 On a beautiful day in sunny Arizona (one of my favorite states), a thin-skinned man-child, who fancies himself king, skipped down the steps of his 747 to meet with Governor Jan Brewer.

Brewer stood toe to toe with Obama and didn’t back down an inch. As I understand it, she gave him a letter welcoming him to the Grand Canyon State, which he disdainfully tossed into his waiting power mobile after barely glancing at it. He let Brewer know just how unhappy he was with her new book “Scorpions for Breakfast: My Fight Against Special Interests, Liberal Media, and Cynical Politicos to Secure America’s Border.” Oh, how appropriate is the title, Jan! Scorpions indeed.

Here’s a bit about the Obama passage in Brewer’s book that has The One so exercised. Our Barack, “condescending” and “patronizing”? Again, go figure:

“It was though President Obama thought he could lecture me, and I would learn at his knee,” the governor wrote, calling his tone “patronizing.”

“He thinks he can humor me and then get rid of me,” Brewer wrote.

Questioned about the different description, the governor said she did not lie.

It sounds … so unlike him.

Right… I think our dear leader needs to go nappy-bye or maybe have a time-out. Someone seems a bit cranky.

The petite blond governor stuck her finger in the Marxist-in-Chief’s chest and informed him that the book was simply the truth. Sucks to be you, huh, Obama? Obama was asked if he read the book and admitted he only read excerpts. But darn it! The excerpts were sorely unflattering and Obama wasn’t going to let Brewer get away without knowing how ‘dissed’ he felt. He then cut her off in mid-sentence, turned his back on her and stomped off. How very presidential.

“He was a little disturbed about my book, Scorpions for Breakfast. I said to him that I have all the respect in the world for the office of the president. The book is what the book is. I asked him if he read the book. He said he read the excerpt. So.”

Asked what aspect of the book disturbed him, Brewer said: “That he didn’t feel that I had treated him cordially. I said I was sorry he felt that way but I didn’t get my sentence finished. Anyway, we’re glad he’s here. I’ll regroup.”…

She said the president brought up the book.

He appeared to walk away from her while they were still talking, and she confirmed that by saying she didn’t finish her sentence.

Here’s the letter that Brewer gave him: 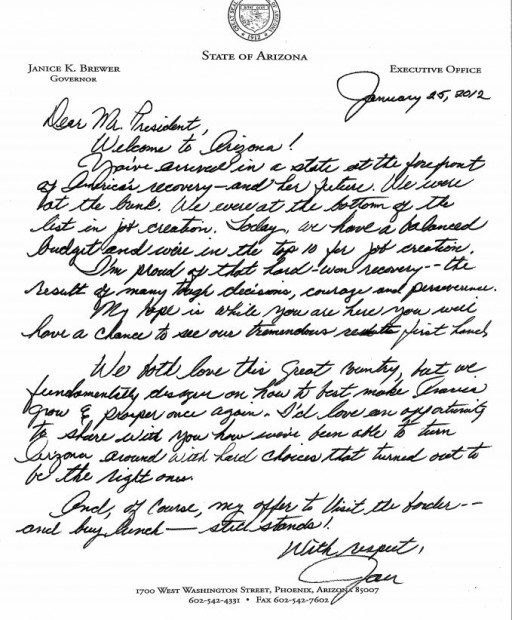 I’m proud of that hard-won recovery — the result of many tough decisions, courage and perseverance.
My hope is while you are here you will have a chance to see our tremendous results first hand.

We both love the great country, but we fundamentally disagree on how to best make America grow and prosper once again. I‘d love an opportunity to share with you how we’ve been able to turn Arizona around with hard choices that turned out to be the right ones.

And, of course, my offer to visit the border — and buy lunch — still stands!

Well I can certainly see how a wee tyrannical dictator would get his itty bitty feelings hurt. Oh, the cruelty! What a freaking drama queen. Brewer called Obama “patronizing” and “condescending.” I’ll bet – she was way too kind. She left out arrogant, petulant, elitist and a whole list of other adjectives that come to mind. You just know that the book has been eating at him and he planned his attack and timing for maximum effect, thinking he would embarrass the governor. It backfired and Obama came off as a spoiled toddler throwing a tantrum on the tarmac. I’m just thankful his lordship didn’t have Brewer beheaded on the spot. I’m sure he was tempted. Maybe later. 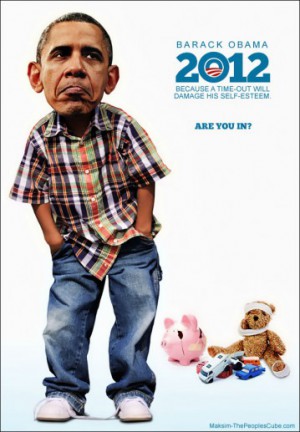 We have just posted an explosive new development. Click on this link and spread the word. We have talked to a private investigator with dynamite inside information about what happened to Glenn Beck’s show on the Fox News Channel.

We understand why this is sensitive information for Beck and his personnel. We do not intend to put anyone in a difficult position. But this story goes far beyond Beck and what happened to his program. This is a matter of a pro-Marxist billionaire interfering with the First Amendment rights of the one major media company in the U.S. that has given conservatives a voice. In the case of Beck, he was the one major media personality to subject Soros to the scrutiny he deserves. We are talking about the public’s right to know. It was bad enough that Soros-funded groups put pressure on Beck’s advertisers and his employer, News Corporation, parent of the Fox News Channel. Now we find out that threats were made and that Beck feared for the safety of his employees. We launched www.sorosfiles.com to pick up where Beck left off. Now we are taking up the cause of seeing that he returns to Fox News. 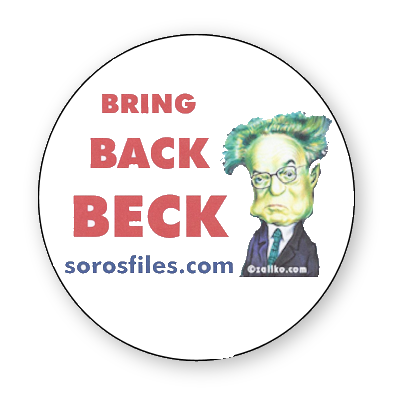 We understand why Beck would want to stay where he is, on Internet TV in the form of GBTV. He should not go back to Fox News unless they guarantee his safety and the security of his staff. But this can be done. This is a battle worth fighting. It will highlight what is happening during an election year when Soros is attempting to get his way and make sure his puppet, Barack Hussein Obama, gets another four years in the white House. The stakes are high.

This campaign will highlight how even the Fox News Channel has capitulated to the money power of George Soros.

Go to this article and read until the very end, where you will find contact information for News Corporation personnel, so that protests can be lodged over the treatment of Beck and his people and the cancellation of the Beck program. The only way to fix what has happened is to bring Glenn Beck’s show back on the Fox News Channel. This is the only way for the Fox News channel to remedy the problem.

Let me tell you something about the program, “The Five,” which replaced Beck’s. It features Democratic Party hack Bob Beckel, the extortion target in a prostitution scandal. Read the whole story in one of my old AIM columns here. Beckel was exposed in the media for hiring a prostitute and then getting blackmailed to keep it quiet. 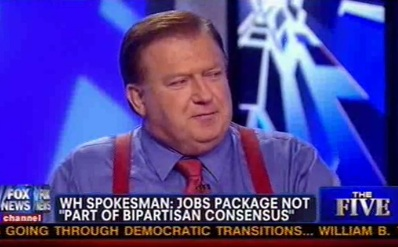 Bob Beckel is on the show that replaced Beck’s.

Can you believe that a sleaze like Beckel would replace Glenn Beck? Even the left-wing Politico has expressed alarm at some of the insults that Beckel spews on the air. But he says, “I’m a liberal and I can get away with this stuff.”

Let’s tell Fox News “enough is enough” and that we want them to “BRING BACK BECK.”

This morning on the Fox and Friends television news show, anchors Steve Doocy and Brian Kilmead interviewed Secretary of Education, Arne Duncan. The subject was the steep continuous increase of College tuition costs across America.

It was an obvious segue from President Obama’s State of the Union Speech, wherein he called for [no specific] action by these institutions to decrease their costs (sic) [pricing], or risk losing federal funding.

Duncan’s answers during the interview, and a subsequent review of his bio, reveals that just like his boss, although a Harvard grad (majored in Sociology), he does not have a scintilla of good sense when it comes to applied economics and business.

But, even more dangerous to the fiscal health of our country and it’s economic recovery, he is ready to enact Obama’s student loan [balance] write-down [forgiveness] idea, which is nothing more than a thinly-veiled “college student vote buying mechanism”–where he would once again use taxpayer dollars like campaign money.

The interview, with my “truth-translations” embedded, is paraphrased below:

FF: ‘Why has a college education gotten so expensive?’

JK: Duncan knows the primary cause of problem is the steep increase in cost of labor and benefits, due mostly to union intervention–both of whom represent a very large portion of the Democrat voter base…so of course he doesn’t want to assign blame.

FF: ‘How come private schools are so much more expensive?’

AD: ‘I don’t have an explanation for that–I don’t know.’

JK: Yeap, you guessed it–he doesn’t want to rile the private academic voter block either; and, to correct his shyness, Duncan went to Harvard and knows exactly why it is more expensive–no government subsidies.

AD: ‘But, we are looking at increasing Pell Grants and “reducing” student loans, to cut the cost of education.’

JK: First, these actions do not result in “cutting” the cost of education, as Obama demanded in his STOU address, the financial burden of which would be born by the budget of each school. Instead, they “subsidize” an “offset” the student’s cost of education–using taxpayer dollars.

And, therein lies the problem with Obama and Duncan’s plan–total lack of knowledge, or understanding, regarding the Economic Pricing Model.

Pell Grant and Student Loan money availability are the prime movers that continue to directly drive “UP” the cost of tuition and books–due to the increased demand for education services and products subsidized by government money, against a more “inelastic” [difficult to increase] supply of such services and products.

This is the exact same type of economic “government horseplay” that led to the residential real estate market “boom,” causing market values to skyrocket way beyond inflation, in a [historically] very short period of time–resulting in the bubble that imploded the worldwide financial system.

To describe in this case, instead of Pell Grants and Student Loans, the catalyst for the real estate boom was the Community Reinvestment Act changes, brought about by President Clinton beginning in the mid-1990s, resulting in the creation of “Sub Prime” mortgages.

These new mortgages had much relaxed, or even eliminated, [low income] buyer qualification standards, which resulted in a greatly increased number of people with mortgage money in the market, quickly creating a much greater demand “chasing” the inelastic [difficult to increase] supply of homes–causing the price of residential real estate to skyrocket to heights never before seen.

It is clear that should Secretary Duncan be allowed to implement [Obama’s] plan, it would actually be ‘pouring gas on the fire’ of an already critical, $1 trillion Student Loan Debt “catastrophe waiting to happen”–by creating another economic bubble of artificial demand using [borrowed] government money.

So, it is imperative that the U.S. House of Representatives must keep the door of the Treasury Department securely locked, to prevent the self-serving incompetence of the Obama Administration, from financially ruining what is left of our country–before they can all be escorted out of Washington, D.C. one year from now.

Be on the lookout for my article next Monday afternoon, wherein I will outline a sound method for correcting this serious situation. 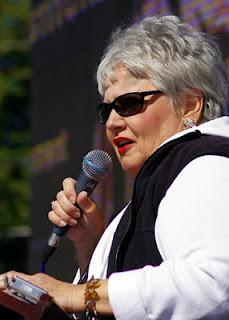 Never a moment’s rest for patriots like Andrea Shea King.

After coming off a trip to Las Vegas last week for strategy meetings with the Campaign to Defeat Barack Obama, The Tea Party Express calls and says, “pack your bags!”

And pack her bags she did. This morning Andrea’s headed north from her home on the Space Coast to meet with other TPX team members so they can organize and prepare for a short but important Florida TPX Tour.

When it comes to presidential races, it doesn’t get more important than Florida. And The Tea Party Express plans to be in the middle of the process right up to the very end.

Complete TPX Florida Tour schedule. Andrea has some notes at her site, The Radio Patriot.

Contribute to The Tea Party Express.

What a Marxist – disgraceful behavior and so typically progressive.