Trevor Loudon will be speaking and promoting his book “Barack Obama and the Enemies Within” across several US states over the next three months.

I’m planning two extensive stays in the US this year, possibly up to 6 months in total.

I will be researching, networking, speaking, doing media interviews and promoting my book “Barack Obama and the Enemies Within.”

“Trevor Loudon does the job that few in the media ever even attempt. This eye-opening book is proof that one person really can make a difference, especially when they have no agenda other than finding the truth.” In the latter half of the year, I hope to have a second book on the market which will examine the socialist and communist ties of many leading US public officials.

I am starting off by attending CPAC 2012 in Washington DC in early February, where I will be signing and selling my book and manning the America’s Survival stand with my good friends Cliff Kincaid and Jim Simpson.

After that, I will be speaking in Florida from February 12 to 25 and the following week in Texas.

I will then be speaking in New Jersey, Pennsylvania and Connecticut and possibly other northeastern states in early March, before heading to Colorado, Nevada and possibly Arizona in mid to late March.

I plan to spend much of April in Washington State, Oregon and California, before returning to New Zealand in early May.

I will begin posting specific meeting times and places in the next week.

I plan to return to the US in August for another three months.

Last year I spoke to several Tea Party, GOP and conservative groups in Oregon, California, Arizona, Washington DC, Arkansas, New Jersey, Alabama and Florida, where I addressed the state Tea Party convention and several other smaller gatherings. All modesty aside, my message, exposing Obama’s agenda and the grave danger to America’s survival should the anti-American left succeed in its plan to cripple US defense preparedness, was very well received.

If you’d like to interview me, or wish me to address an audience, or conference in your state, please contact me through this website, or directly at [email protected].

I have addressed groups ranging in size from 15 to 1500. Obviously the bigger the audience the better, but this tour is essentially about helping to make a difference in a critical year. If I can fit your group into my itinerary I will.

I finance my travels and research through donations, book sales and some appearance fees. Many of you have helped with contributions in the past and I am hoping you will consider doing so again.

All my fundraising is now done through my Nevada registered non-profit Pacific Freedom Foundation. Please click here and contribute through the donate button on the bottom right of the page.

This little New Zealand-based blog, punches well above its weight.

Flick back through the last few posts and ask yourself, “where else can I get this information?”

I have long contended that the US’ largest and most militant labor organization the Service Employees International Union, is allied to, or subordinate to, the country’s largest Marxist organization – Democratic Socialists of America.

Here is proof of this connection, from the latest edition of DSA’s Democratic Left, Winter 2011/2012, page 11:

Of the SEIU leaders listed above, Eliseo Medina and Gerry Hudson are long time DSA members, while Tom Woodruff is a former member of the ultra-radical Students for a Democratic Society and, at the very least, a  DSA affiliate. The lower ranks of SEIU shelters dozens more DSA activists and supporters.

Through SEIU, DSA has 2.1 million paid lackeys to do just that.

Steve Balich on Fox TV said we need to get our spending, regulations and taxes under control. We need jobs. We can’t borrow money we don’t have to give away.

Sunday morning has the TPX crew on board the tour bus and headed to The Villages–1:30 PM ET; then Gainesville at 4:00 PM ET.

Last night as the TPX-Florida tour was wrapping up a long day in West Palm Beach, Newt and his crew surprised everyone by showing up. As you can see, tour Embed Andrea Shea King got a picture with the Speaker. Newt was very gracious, and generous with his time. Andrea has more at her site, The Radio Patriot.

I will build this post on the fly as events develop on tour, so stay tuned! There’s always more to come. In the meantime, you can CONTRIBUTE to the TPX Florida Tour just by clicking the link. Your help is greatly needed.

As always, much thanks to Terresa at NoisyRoom Blog for all her help in getting the word out. Chicago area blogger John Ruberry at Marathon Pundit is reporting that Cain has endorsed Newt. In fact, that’s where Newt was just before meeting up with TPX and Andrea last night. 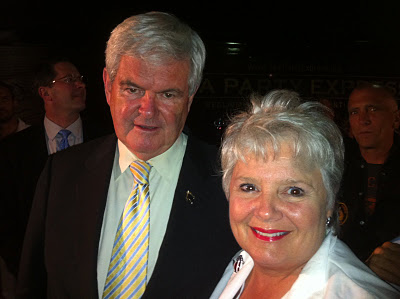 The TPX tour just wrapped at The Villages, according to tour embed Andrea Shea King. As she put it–“it was mobbed with people… lots of golf carts.” The TPX tour is now headed for Gainesville for a 4 PM ET rally. While on the road, Andrea will forward some pics from the rally at The Villages. Stay tuned.

The man can truly speak, I’ll give him that.

From: The Right Elective Decisions

My guy is still Santorum. But as I said before, whoever gets the Republican nod will have my vote – but I don’t have to like it. The current choice is between two progressives – neither of which are conservatives. See for yourself on the Gingrich side.