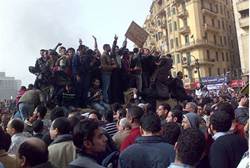 Prior to the Super Bowl yesterday afternoon, President Obama took the opportunity, afforded him yet again, to join Today Show anchorman, Matt Lauer, in what turned out to be a “powder-puff parlor chat”, masquerading as a “wide-ranging interview.”

Thanks in large part to Lauer’s avoidance of serious, probative follow up challenges, like most–this interview was rendered just another well scripted, prime time campaign soliloquy for Barack Obama.

It is beginning to appear as though ABC, NBC and CBS are all in a competition for presidential ‘most favored network’ status–with the president’s only real interrogator, FOXNews, not even invited to the party.

Fortunately, this type of “softball” interaction between Obama and the compliant main stream media, lends itself perfectly well to our “story” dissection and translation methodology. And, for these purposes, we shall use the U.K. Daily Mail article from yesterday, by Beth Stebner and Mark Duell, which showed no greater curiosity towards President Obama’s proclamations, as a transcript.

We shall just focus on the main point of the interview, the economic recovery–defined in terms of the miraculous decrease in the unemployment rate…

Lauer: brought up the President’s 2009 pre-Super Bowl interview, wherein Obama famously promised: ‘If I don’t have this done in three years, it’s [his presidency] going to be a one-term proposition.’

Obama: “I deserve a second term – but we’re not done.”

JK: As Obama is, by his words and deeds, a “socialist,” he is the antithesis of the founding principals of the United States, and would transform the U.S. into a European-style social welfare state…and we can see that would not be pleasant.

Obama: “The unemployment rate fell to 8.3 percent in January, its’ lowest since February 2009.”

JK: This is because so many people have given up on looking for a job and are not “actively” looking; therefore, the Bureau of Labor Statistics (BLS) does not count them in the work force.

Their sense of futility is justified by the fact that the U.S. has about 5.6 million fewer jobs than it did when the recession began in late 2007, according to government figures reported in a FOXNews article last Friday.

There are still 12.8 million people out of work, plus 11 million who are under employed or who have stopped searching for jobs. When combined, nearly 24 million are considered “underemployed,” whose rate is still at 15.1 percent as of January.

According to Peter Morici, in his article today … “The most effective Obama jobs program has been to convince more Americans they don’t want a job—without that, the unemployment rate would still be at least 9.5 percent.”

There are a growing number of GOP lawmakers who believe that the decrease in the unemployment rate is all too suspicious, considering the number of people who have left the workforce is determined via monthly telephone surveys, not “actual hard data”–such as new unemployment claims where people walk in and sign up for it–from which a statistical estimate is made.

Conveniently, like clock work, moving into an election year, the monthly unemployment rate has decreased by exactly 20 basis points each month, beginning in October, since it was over 9.0 percent from May 2009 through September 2011, according to BLS figures.

Bill Ayers and Bernadine Dorn auctioned off an evening for dinner in their home in Chicago and Tucker Carlson of “The Daily Caller” took advantage of the opportunity. For $2,500 Tucker and a few of his friends secured an evening with the radical couple. Tucker invited along Andrew Breitbart who called into Stephen K. Bannon’s “The Victory Sessions” and gave a play-by-play of the meal. Breitbart said that they had “no game plan” going in to the evening, and that strategy produced an unforgettable event that the Ayers won’t soon forget.

Nancy Pelosi the Democratic Leader of the House of Representatives while addressing the 2012 Communications Workers of America Legislative-Political Conference laid out her political funding views for Medicare, unemployment benefits and the payroll tax credit. Pelosi complained ‘I’d rather NOT do it paid for. I’m prepared to do it almost at any cost’ and then came up with a solution if she must be forced to actually pay for the legislation she backs ‘I think it should be very simple you want to pay for it – pay for it pay for it with a surcharge for the wealthiest people in our country that’s easy.’

Rep. Bennie Thompson used his appearance at the 2012 Communications Workers of America Legislative-Political Conference to show the sort of political rhetoric Democrats often accuse Republicans of, repeatedly calling their opponents “the enemy,” and urging the audience to flip on Fox News to “see what the enemy is doing.”