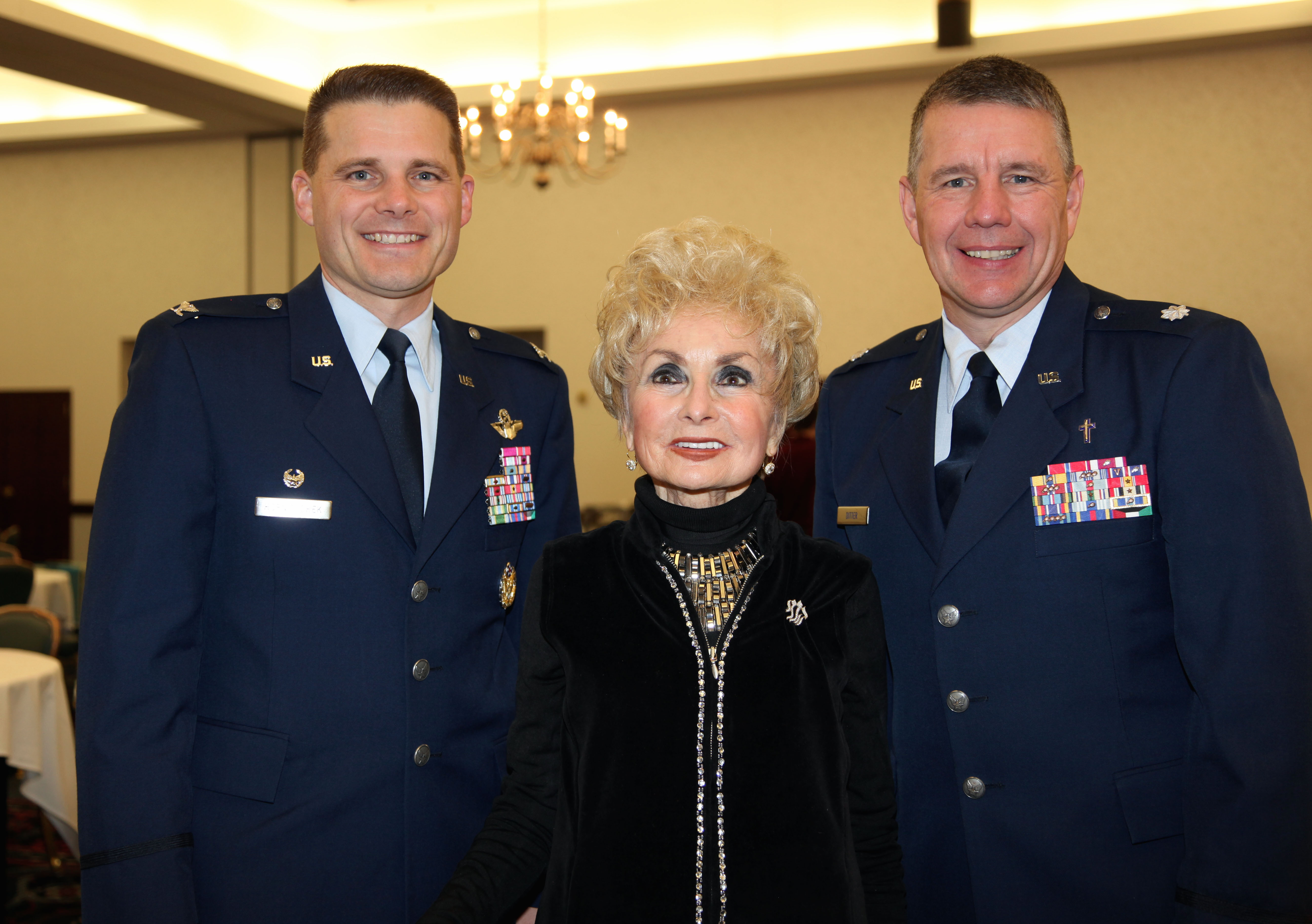 On Tuesday, February 14th, over 500 members of the United States Air Force sat in rapt attention at the Scott Air Force Base near St. Louis, Missouri as Rebbetzin Esther Jungreis, founder and president of Hineni, the international Torah outreach organization, delivered a captivating address on the power of faith in G-d during the darkest moments in the annals of history.

Having been invited to be the guest speaker at the USAF annual National Prayer Breakfast by the commander of the 375th Air Mobility Wing, Rebbetzin Jungreis told her audience of both enlisted personnel and high ranking officers including generals that, “my very presence here today is a miracle of mammoth proportions and it testifies to the eternal faith that we have in G-d.” Recalling her experiences as a survivor of the Holocaust, Rebbetzin Jungreis declared, “I stand before you today as a representative of the Jewish nation. Logic dictates that we shouldn’t be here, but we are here. We have not only survived but we have prevailed over the innumerable tyrants that have risen up against us since time immemorial and this is due to our devotion to G-d through the incalculable power of prayer.”

As palpable emotions filled the room, Rebbetzin Jungreis told her audience of the lessons she learned from her revered father, of blessed memory, HaGaon HaRav Avraham HaLevi Jungreis, ZT”L, who instructed her to be ever vigilant with her words when speaking in public and to consider her audience. “My father would consistently remind me to always leave a gift behind when speaking and this priceless gift is the wisdom from Sinai that has defined us as a people.”

Expounding on the timeless pillars of faith that hold up the world, namely Torah, the truth of G-d, prayer and Gemilus Chassadim (acts of kindness), Rebbetzin Jungreis exhorted her audience to uphold the name of G-d in righteousness. As her emotionally charged address drew to a conclusion, tears filled the eyes of those present and Rebbetzin Jungreis received several standing ovations. Said one USAF Captain, who chose to remain anonymous, “In all my years in the service of this country, I have never witnessed an audience like this who have been totally transformed by the words of this righteous woman. Clearly, she is a living and breathing inspiration to us all; a paradigm of exemplary faith and courage. May G-d continue to bless her in abundance.”

Oh, how time flies and people grow up and mature. I remember a time in my life in the 1980s when the speed metal band, MEGADETH, was all about being anti-Reagan and hating the American military. Again, the times they are a changing.

Now some 30 years later: drug rehab, drinking problems, band member changes, some surgeries and getting a wife and life and kids, Mr. Mustaine, who also used to play and run with METALLICA, has had a big change of life and his heart.

In an interview yesterday, Dave Mustaine voiced his support for RICK SANATORIUM and observed that Obama was not doing a good job. The interviewer then changed the subject really fast.

This observation of Mustaine’s is a 360 turn around from 1992 when he was supporting the Democratic vote with MTV.

Here is one thing I have noticed as well… a lot of the TEA PARTY rank and file are 40-something metal heads from back in the day like me. And of course, we all love TED NUGENT, the first long haired conservative to rise to fame.

So, to all of us aging metal heads out there… let’s give Dave Mustaine some support. Let’s practice capitalism at its best and buy his new album Thirteen and let him know he is not alone.

*Note to our readers: It would appear that Dave Mustaine has not fully decided on endorsing Rick Santorum. Perhaps pressure from inside the industry is giving him pause.

We have all come to realize that Liberal’s socialist utopia driven policies and edicts generally enact the “Law of Unintended Consequences,” such as the then, little-noticed 1995 Clinton-era CRA regulations that required banks to give mortgages to low income people in high risk neighborhoods.

The stated goal was noble–to increase home ownership in America.

However, what we got was the “Sub-Prime Mortgage Crisis,” an Armageddon-like mass meltdown of the residential real estate and financial markets beginning in 2006. Over $8 trillion in stock market equity rapidly evaporated, along with trillions of dollars in home market values, leaving 50% of American homeowners with no or negative equity (“underwater”), and foreclosure rates of up to 33% in some areas.

The ruination of the entire U.S. economy devastated nearly all of the very people this pathetic plan intended to help, by loss of value, foreclosure and widespread, continuing unemployment–with minority unemployment nearly double the national average.

So, in another attempt to circumvent the market by political fiat, the Obama administration has positioned itself to force half of the new car buying population in the country out of the market, which would seriously maim all three American car companies and cost millions of good jobs.

How can they do this?

The Obama EPA is planning to enact their stunning 2025 EPA fleet fuel efficiency standard, raising it from the already high 35.5 miles per gallon mark by 2016, to a whopping 54.5 miles per gallon, according to Judson Berger’s FOXNews article yesterday.

The price from accomplishing this objective will add from $3,000 to $5,000 (today dollars) to the price of a new car–and that will cause about 6.8 million people to be unable to qualify for a loan to purchase a new car, according to Bailey Wood of the National Association of Auto Dealers (NADA).

The Obama administration “sold” the idea to the unwitting public, by saying the increase in price would pay for itself by fuel cost savings over four years. However, as Wood points out, if the customer can’t afford the new, fuel-efficient vehicle in the first place–the reduction in fuel consumption and lowered emissions is an academic non-starter.

Instead, they will go to the relatively “gas-guzzling” used car market to make their purchase, while seriously damaging Detroit by being priced out of the new car showrooms.

And in a January statement from Mitch Bainwol, head of the Alliance of Automobile Manufacturers, carmakers are in lock-step with dealers, saying … [the] “ultimate question” is whether consumers will buy these new cars.

Otherwise its’ “game over.”

In following their instincts for self-preservation, autodealers are hoping to convince the administration to delay the process, until the impact on consumers can be further studied.

Just like Obama mandated additional time for review of the Keystone Pipeline deal.

Do you really think President Obama will risk derailing his environmental extremist voter base, in an election year–just to save the country from mass destruction?

“A wild boar stood under a tree, and rubbed his tusks against the trunk. A fox passing by asked him why he thus sharpened his teeth when there was no danger threatening from either huntsman or hound. He replied, ‘I do it advisedly; for it would never do to have to sharpen my weapons just at the time I ought to be using them.’ To be well prepared for war is the best guarantee of peace.” – The Fables of Aesop