Tonight you and I are going to take a good hard look at Margaret Sanger and her cute little cottage industry of baby death and the so-called urban depopulation program known as Planned Parenthood. We will look into what Planned Parenthood says is their reason for being and what their real mission in life is. We will also look at Margaret Sanger herself – her flat out racism, her love of booze, Demerol and H.G. Wells and we will break apart the lies that the mass lamestream media have invoked on this baby death factory and look into the forgotten Negro Project… A useful idiots program to fool black leaders and pastors into promoting birth control and/or abortion for the black population in order to hinder or stop their growth rate altogether.

So what do we know about Planned Parenthood? Publicly, they claim they are a women’s rights and health based group and they only care about a woman’s reproductive health and so on and so forth. The lamestream media, being the useful idiots that they are, play along with this without checking up on anything that they say or do. Now, let’s look into a mere year and a half ago when two young and brave kids went to Planned Parenthood offices all over their area. They posed as a pimp and prostitute who wanted to get forign underage childern in the country for a child sex ring and all of the Planned Parenthood workers were all willing to help with this idea and provide housing, medical and other benefits. I don’t know about you, but that does not sound like promoting women’s health issues. Yuck!

Looking at Margaret Sanger, I have learned that she is very much a self-loathing woman. Having been lured into the up and coming eugenics movement in the early 20th century, she latched onto a political professor named Thomas Robert Malthus. This man was recorded as stating, “That a population time bomb threatend the existence of the human race” and wrote a lengthy essay on the subject entitled, The Principles of Population.” Miss Sanger believed this as well and that it was a societal duty to cut back and/or slow down population growth. She first started small with forced birth control and sexual freedom. Margaret Sanger, being the joyful woman that she was, had both an addiction to booze and the painkiller Demerol. She also had an extramarital affair with Mr. utopia and eugenics freak himself, H.G. Wells. This guy at one time was one of my favorite writers until I found out more about him – what a jerk. She had also founded a pro-birth control newsletter in 1912 called Birth Control Review. On the speaking circuit, she was spreading her message through the chapters of the Klu Klux Klan. She did this so well with her depopulation message that she inspired Hitler of all people. Wow! I wonder how that happened.

Let’s look into the forgotten/covered-up history of The Negro Project. In 1939, Margaret Sanger wanted to do something about those pesky black Americans and other undesirables that were having kids, raising families, working hard, taking up space and air. She decided to start a targeted program to slow their growth and/or exterminate those undesirables she found unfit to breath. She did this by fooling pastors and community leaders into telling and promoting to good people that it was their right and duty to have forced birth contorol and/or abortion for the public good and/or public health. Sound familiar? She is quoted as saying, “If the leaders of these communities found out what I was really doing, I would be run out or killed.”

So, that’s the ugly, but true historical overview of Planned Parenthood and their founder Margaret Sanger. It’s true evil and racism in its purest form. I could not make this stuff up. If you think I am, please e-mail me at [email protected] and I will send you the documentation and hard evidence. I keep all of my research and remember all these articles that I write. I don’t make any money off of them, so I have nothing to gain. 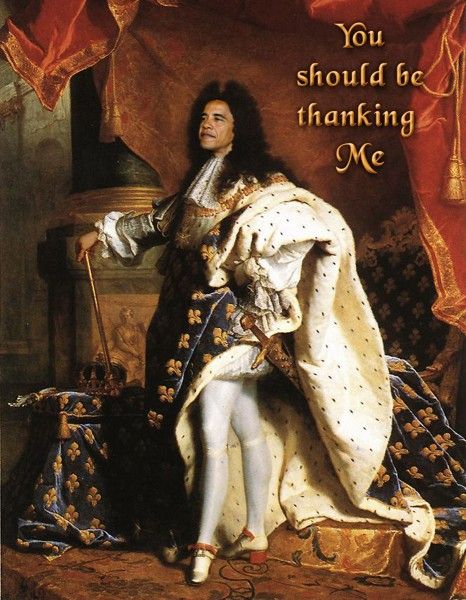 Imagine you wake up tomorrow and this is not a Constitutional Republic anymore. It is now a dictatorship. Whoops! Already accomplished. Then imagine that you wake up tomorrow and the President and our elites have given away part of the US. Then imagine it was your state and your state and Senators weren’t even consulted on it. In fact the deal was conducted in secret. Well, the nightmare is alive and well and being finalized for Alaska. But, before you go cursing ONLY Obama (as I do every damn chance I get), you better have a really hard look at Progressives on both sides of the aisle. This monstrous act of treason started under Bush Senior in 1990 and was ratified by our Senate in 1991. The only thing holding it back was that Russia had not signed the treaty. Obama is now looking to finish the diabolical deal.

From Drink Your Kool Aid:

On June 1, 1990, Secretary of State James Baker signed a secret executive agreement with Eduard Shevardnadze, the former U.S.S.R. foreign minister. It specified that even though the treaty had not been ratified, the U.S. and the U.S.S.R. agreed to abide by the terms of the treaty beginning June 15, 1990. The Senate ratified the U.S.-U.S.S.R. Maritime Boundary Treaty in 1991, which was then signed by President George Bush.

I can hear you saying that this is only about some tiny little islands and that they are closer to Russia than the US – why should we care? These islands are not tiny. And the true issue here is that they have a wealth of oil and resources on and around them. That’s the big deal. Plus, they’re ours – not Russia’s.

Why now, when this treaty has languished for 22 years? Well… Why not? It accomplishes a number of things for Obama. It takes a slap at the conservative state of Alaska and attempts to put her high-profile residents such as Sarah Palin and Joe Miller in their collective places. It caves to one of our biggest enemies, Russia, and weakens the US even more in their eyes. It gives precious energy resources away for nothing, thereby ensuring that energy prices will skyrocket even more in the US when that energy is needed. And who knows what other nefarious goals the deed accomplishes. Progressives are always figuring an angle and it never benefits US citizens – just the elite and powerful.

Part of Obama’s apparent war against U.S. energy independence includes a foreign-aid program that directly threatens my state’s sovereign territory. Obama’s State Department is giving away seven strategic, resource-laden Alaskan islands to the Russians. Yes, to the Putin regime in the Kremlin.

The seven endangered islands in the Arctic Ocean and Bering Sea include one the size of Rhode Island and Delaware combined. The Russians are also to get the tens of thousands of square miles of oil-rich seabeds surrounding the islands. The Department of Interior estimates billions of barrels of oil are at stake. 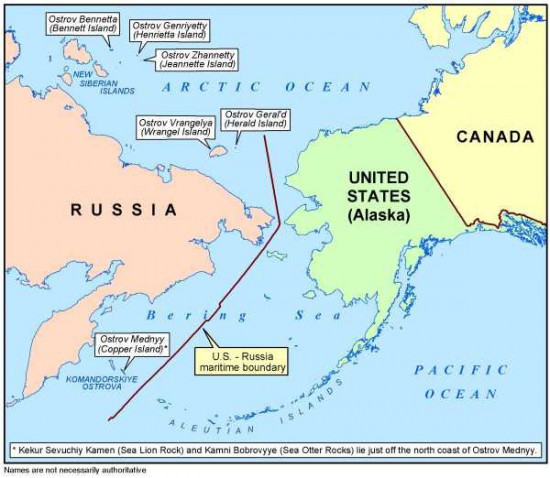 The State Department has undertaken the giveaway in the guise of a maritime boundary agreement between Alaska and Siberia. Astoundingly, our federal government itself drew the line to put these seven Alaskan islands on the Russian side. But as an executive agreement, it could be reversed with the stroke of a pen by President Obama or Secretary Clinton.

The agreement was negotiated in total secrecy. The state of Alaska was not allowed to participate in the negotiations, nor was the public given any opportunity for comment. This is despite the fact the Alaska Legislature has passed resolutions of opposition – but the State Department doesn’t seem to care.

In May of 1881, US explorers spotted the Jeannette and Henrietta Islands and claimed them for the United States. According to numerous sources, including the group State Department Watch, seven Arctic islands currently controlled by Russia are claimed by the United States. However, according to the United States Department of State, no such claim exists. The USSR/USA Maritime Boundary Treaty, which has yet to be approved by the Russian Duma, does not address the status of these islands nor the maritime boundaries associated with them. And of course, the Russians are claiming them for their own. The fight over Alaskan land has been going on since the 1800s and the Russians are claiming and taking any land anywhere they can find it that has oil or gas.

The Obama Administration is reportedly giving away Wrangell, Bennett, Jeannette and Henrietta islands in Alaska to Russia. They are getting ready to finalize the deal. The federal government drew the line to put these seven Alaskan islands on the Russian side with no input from Alaska, her leaders or her residents. How is that Constitutional? And don’t cite the Treaty Clause to me. This oversteps the bounds of that section by a wide margin. Thus the need for secrecy and no transparency on the deal. The founding fathers never envisioned a sitting President and the State Department just giving away American sovereign land.

And as far as a milquetoast, spineless Senate is concerned – every one of them that ratified this in 1991 that is still in office should be shown the door that leads to a rail out of town with a spiffy new coat of tar and feathers. This treaty makes an excellent argument for abolishing the 17th Amendment and returning to the true Constitutional principle in which senators were elected by state legislatures, not by popular vote. This is what you get when you bastardize and supersede Article I, § 3, Clauses 1 and 2 of the Constitution.

Who the hell do these people think they are? I’ll tell you… They truly believe they are the elite and that they are above your station – you are the riffraff, the serfs that only exist to serve them. They are royalty and their moniker is Progressive. They are the ruling class and the truly, obscenely wealthy and powerful. For too long we have let them rule as they see fit rather than by the will of the people. Obama is just the culmination of decades of inattention to the evil infiltrating our government’s halls. Time to send them all packing.

The powers delegated to the federal government are few and defined. Those which are to remain in the state governments are numerous and indefinite. The former will be exercised principally on external objects, [such] as war, peace, negotiation, and foreign commerce. The powers reserved to the several states will extend to all the objects which, in the ordinary course of affairs, concern the lives, liberties, and properties of the people.

That’s who they think they are; your King, your Lords, your Nobility. They don’t care what happened in 1787, they still think they own you.