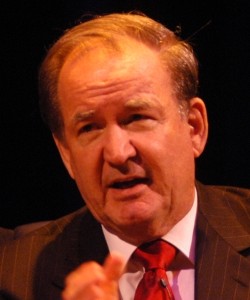 MSNBC’s decision to dismiss Pat Buchanan shows the depths to which the mainstream media has caved to far-left pressure groups like the Southern Poverty Law Center, the National Council of La Raza, Color of Change and Media Matters.

There can be no doubt that these smear operations were responsible for Buchanan’s dismissal. Color of Change claims to have sent 275,000 petitions through the group CREDO Action demanding Buchanan be removed, and says his firing was their “campaign’s success.” After Buchanan was let go, Media Matters tweeted from its official Twitter account, “Thanks to tens of thousands of MMFA members’ voices, also @ColorOfChange & @CREDOMobile — You all made Buchanan’s exit possible!” Buchanan himself blamed pressure from “the blacklisters.”

Some, such as media critic Howard Kurtz, argue that Buchanan’s dismissal is merely a product of MSNBC’s leftward drift. While this may have been a big factor, both CNN, which is relatively moderate, and Fox News, which is conservative, apparently dropped hosts Lou Dobbs and Glenn Beck after similar pressure campaigns from the same groups.

That being said, Pat Buchanan’s dismissal is unprecedented for a number of reasons. First, while we can speculate as to why “The Glenn Beck Show” and “Lou Dobbs Tonight” ended, neither the hosts nor the networks ever explained what had happened. Pat is the only commentator, thus far, to acknowledge that these groups were responsible for his dismissal.

Additionally, while I am a huge fan of Beck and Dobbs, Pat Buchanan has been an institution on cable news since its inception. He was a founding member of three of the best-known news shows: “Crossfire,” “Capital Gang” and “The McLaughlin Group.” This is to say nothing of his several bestselling books, his three runs for president and his position as a close adviser to three presidents. MSNBC’s decision to fire such a highly esteemed commentator shows how powerful these smear groups are becoming.

Regardless of whether you agree with Buchanan’s positions on homosexuality, immigration or race, his views on these subjects have been open and unchanged for decades. Yet both MSNBC and the left-wing groups responsible for his dismissal are claiming what he wrote in his latest book, “Suicide of a Superpower,” somehow crosses a line. According to MSNBC president Phil Griffin, the book contained ideas that should not “be part of the national dialogue, much less part of the dialogue on NBC.”

What were these terrible ideas? Almost all the articles about Pat’s dismissal note that his book contained ideas chapters called “The End of White America” and “The Death of Christian America.” What they don’t mention is that he named these chapters after recent cover stories written by liberals in The Atlantic and Time. As Pat notes in “Suicide of a Superpower,” liberals such as Bill Clinton and Michael Moore have actively cheered the demographic changes caused by our immigration policies.

I don’t believe that these changes will necessarily doom America. In my review of “Suicide of a Superpower” last October, I wrote:

I believe that if we have a slowdown on immigration and we end multiculturalism — two policies that Pat calls for in the book — that immigrants of all races in this country will assimilate. However, when left-wing groups and politicians are openly stating that their numbers will lead to the destruction of traditional American culture and the Republican Party, no one can ignore the realities that Buchanan brings up.

Left-wing groups like Color of Change and Media Matters want Americans to ignore these realities, and that’s why they are trying to silence Buchanan.

They are the real bigots and extremists. Color of Change is headed by Van Jones, a man who described himself as a “communist” until a decade ago. Color of Change’s mission statement says the organization “exists to strengthen Black America’s political voice. Our goal is to empower our members — Black Americans and our allies — to make government more responsive to the concerns of Black Americans.”

It’s a complete outrage that a group headed by a radical with such a blatant agenda can succeed in smearing a respected conservative as an “extremist” and a “racist.”

Fortunately, I doubt that Pat will be silenced. His dismissal came just days after The Daily Caller published a devastating and widely discussed exposé on Media Matters. MSNBC’s decision will help feed the growing backlash against these anti-free speech groups. Even many liberals have come to Pat’s defense, and his book sales have surged.