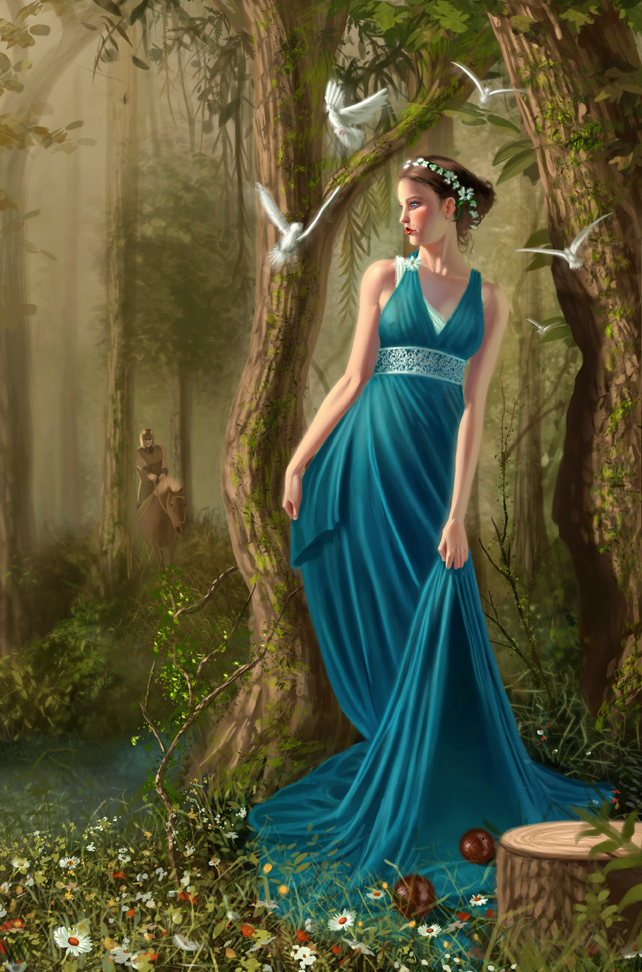 Persephone ate 6 pomegranate seeds after being abducted by Hades, thus condemning her to 6 months a year in the Underworld and 6 months above with the Gods of Greek mythology.

Once upon a time there was a bright, shining city on a hill… An evil, so vile as to level the city bore down upon it with its hellish dark army and vicious commanders rejoicing in the destruction of freedom’s only stronghold. I wish this were a fairy tale, then I could tell you that there would be a happy ending, but I cannot. However, there is an evil witch involved – enter stage left Frances Fox Piven wickedly casting her Occupy spell over America:

For those of you who say that Piven and Soros are old and toothless, you’d better face their evil in its totality. Just because you don’t believe they want to bring us down, doesn’t mean they don’t believe in it wholeheartedly. Piven will revel in the chaos this spring and summer. She passes out poisonous fruit in the form of class warfare and hatred like candy. Soros is using his billions to reshape the world in his image and foment as much mayhem as he can in order to garner himself ever more power and wealth. Both of these people fancy themselves as divine beings, rather than what they really are – old spiders spinning killing webs with the help of useful idiots, the Occupy Movement and Anonymous.

Piven is predicting the Occupy Movement is entering the phase where it “makes trouble” and will soon be taking action against banks and other institutions.

“It may well be that the Occupy movement is now in its second phase, in the phase where it makes trouble, in the phase where it threatens to shut down institutions,” Piven said. “The Occupy movement has moved into the neighborhoods of our cities, it has moved into the schools….This spring, we’ll see action against the banks, against the corporations.”

“The people who were sitting on top of the world, the top-tenth of the top 1 percent, were guilty. They were guilty of thievery, of chicanery.”

The Occupy Movement has indeed partaken of the poisonous fruit offered to them. But there will be no prince to awaken them when they fall and God tends to turn His back on those who choose the wrong side. 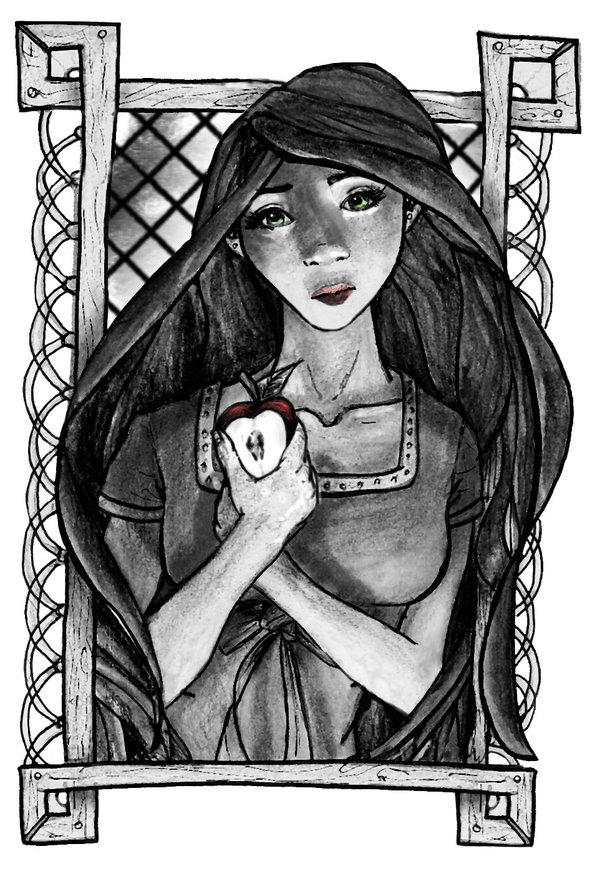 Piven is certainly not alone in her efforts. From People’s World:

There’s another springtime swirling here: the rebirth of the Occupy movement. Organizers, “citizens of the Internet,” global activists and undoubtedly the infamous Black Bloc are planning to make a journey to the city that gave birth to May Day and the fight for the 8-hour day beginning on International Workers Day, May 1.

Now, pledging non-violence, Occupy Chicago and Adbusters, the group that brought us Occupy Wall Street, have sent out calls far and wide via YouTube, Tumblr and Facebook for 50,000 to descend on Chicago in May. Why? That’s when Chicago will be hosting meetings of G8 and NATO, two of the most powerful multilateral groups in the world, representatives of the global 1%. G8 represents the eight largest capitalist economies in the world and NATO is their military force. 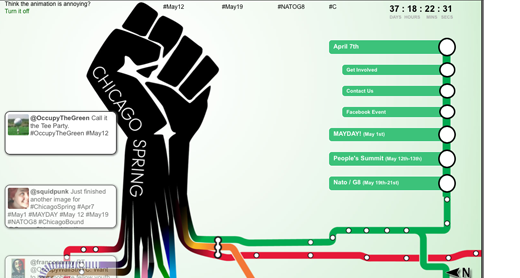 Don’t let the fact that Obama has moved the G8 meeting to Camp David distract you. That move was a gift to the Occupy Movement. It telegraphed that they are a force to be reckoned with, to be respected, to be feared… Obama just strengthened the movement ten fold. The NATO meeting will still occur in Chicago allowing the Occupy Movement to fully display their communist wares for all to see in Chicago – the very heart and soul of corruption. The irony is not lost on me that the top dogs who are decrying the 1% are in fact, the 1% themselves. This isn’t about fairness or the wealthy – this is about power.

And what nefarious gathering would be complete without the treasonous Bill Ayers and Bernardine Dohrn combo? Whackiness is sure to follow in multiple dark forms. From Bill Ayers:

The tiny fraternity of concentrated wealth and power that calls itself the Group of Eight (G8) is meeting in Chicago in mid-May, overlapping with representatives of history’s largest global military cohort, NATO (North Atlantic Treaty Organization), the gently self-named military behemoth dominated by the US.

Heads of state, spooks, foreign ministers and generals, cabinet members and secret operatives, advisors and bureaucrats— the 1% of the 1%—plan to gather in barricaded opulent surroundings while coordinating and conspiring to extend and defend their obscene wealth, to exploit the remaining fossil fuels, natural resources, human labor and the living planet to the last drop, and to dominate the people of the global majority.

A 1984-style national security dragnet is descending on the city to attempt to lock Chicago down. Chicago’s Mayor is concocting a culture of fear, suggesting that it is the human resistance to NATO/G8 that represents danger, outside agitators, violence and invasion. Universities and schools are being urged to close early in May; communities of color are told that this is not their concern; merchants are preparing for assault. In reality, NATO/G8 represents the masters of war; it is they who are the greatest purveyors of violence on this earth.

NATO/G8 will not be alone in Chicago: Occupy’s 99% will gather in a festival of life and peace, joy and justice. Two permitted, family-friendly rallies at the Daley Center and marches for justice, jobs and peace are scheduled on May 18 and 19 (and perhaps another on May 21). Music, dance, teach-ins and peoples’ tribunals will overflow the parks and theatres. We will all be there to open Chicago back up. In the spirit of the Arab Spring and Occupy, the Madison labor struggle, the Pelican Bay hunger strikers, teachers and nurses, the Dream youth, returning veterans against the wars, women insisting on reproductive dignity, foreclosure resistance, LGBTQ equality and,many more, Adbusters, CanG8, Code Pink, Portoluz and others have called for people to come from near and far, armed with their spirit and their creativity, pitching their tents and staking their claims.

We’re excited and you’re invited: Come to Chicago, May 18-May 21. Bring a sleeping bag, and if we have room, you can stay with us on the Southside.

Mayor Rahm Emanuel has made it entirely clear that he alone will happily host NATO/G8, but that the 99% are decidedly not welcome. He has funding to further arm and mobilize the police and militarize the city; he has announced plans to contain and suppress demonstrators; he has pushed through legislation that restricts and criminalizes free speech and assembly, and requires insurance for public demonstrations; he is issuing a steady stream of pronouncements about Chicago-under-siege from ominous and dangerous outside forces.

But Chicago is big enough for all—it is after all a nuclear-free and cease-fire city, cradle of the Haymarket martyrs and the 8-hour day, labor and peace actions, vast civil rights and immigration rights manifestations, home of Ida B. Wells Barnett, Jane Addams, Richard Wright, Gwendolyn Brooks, and Studs Terkel. The rich and the powerful do gather here, but Chicago is a public space with historic parks, monuments, neighborhoods and streets for popular mobilizations as well—Chicago belongs to all of us. We underline the right—the moral duty—to dissent and demonstrate, to resist and to be heard, to participatory (not billionaire paid for) democracy. Mayor Emanuel can still change course, and he should; so far he has obstinately and foolishly chosen to frame mid-May solely in military and security terms.

The mayor, not the popular resistance, is creating conditions—once again—for a police riot in Chicago against people who have every intention and every right to assemble peacefully deploying humor and music, art and play, civil disobedience and imagination to forcefully express rejection of imperial and permanent wars, to challenge racial/ethnic/gender discrimination and hate, to demand justice, education, health care and peace, women and gender dignity, the opportunity for meaningful work and reversing epic income disparities, an end to mass incarceration, and the urgent need to shift course and live differently for the sake of the planet and future generations.

Join us in Chicago in May (or, if you can’t come, act in solidarity—Occupy the suburbs, cities, and communities across the land): stand up for civil and human rights, exercise your voice and be a witness, act up and speak out. Be part of a wave of people power, creative direct non-violent action, and the most vast, determined resistance in memory.

Another world is possible!

Deception, thy name is Ayers. Rahm Emanuel is actually part of the movement, carrying out a brilliantly choreographed chess maneuver to forward the bottom up, top down, inside out endgame of this whole event (or should I say ’emergency’). The whole movement is classic Cloward and Piven strategy. Overwhelm the system, bring down the nation, control the people. Occupy are the lemmings off the cliff. Revolt, cry havoc! and let slip the dogs of war, whatever it takes… but don’t question your leaders and backers. Certainly don’t look at their motives too closely.

And somewhere in the mix, you can bet Van Jones will appear as a leader if not ‘the leader‘ of the movement.

“You’re going to see an evolution now as you go from protests, keep the protests, but now expand into politics,” Jones said. “And if you thought there was an earthquake in 2010 when the Tea Party moved into politics, wait until this 99 percent movement moves over into politics. You haven’t seen anything yet.”

Jones said the movement is “going to be recruiting 2,000 candidates to run for office now under this 99 percent banner“ as Occupy Wall Street enters ”phase two.”

The Occupy Movement and Anonymous are the poisonous fruit of the American Spring. Everyone that touches it becomes tainted. They are being used by elites such as Piven, Soros, Van Jones, Ayers and Dohrn to bring down our Constitutional Republic once and for all. Their ilk has been at it for over a hundred years and they think victory is so close they can almost taste it.

Conservatives need to unite behind their chosen candidate and stand on strong conservative principles if they are to survive. We cannot be divided and defeat Barack Obama and the machine that supports him. We won’t survive another four years of his Marxist game plan. We need to make sure that the Progressives taste their own poisonous fruit and that we keep to the untainted fruits of our labor while trusting in God and the incredible vision of our founding fathers. Our American Fall needs to be an American Revival that cleans out our halls of government and ushers back in a moral, ethical and prosperous future for America — a harvest of the pure and righteous fruit of the Constitutional garden.