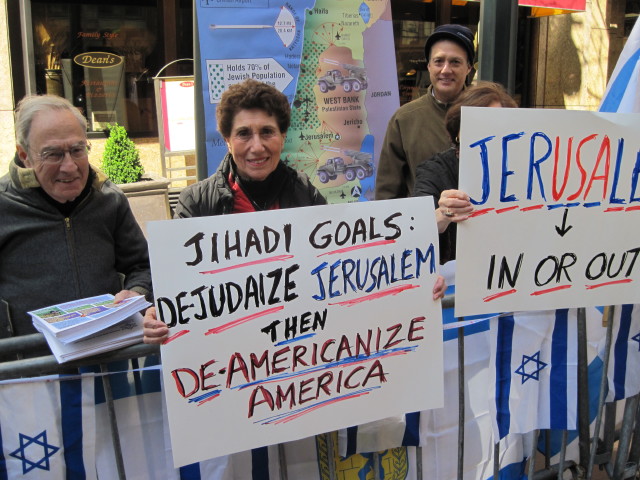 On Friday afternoon, March 30th, over 40 demonstrators representing such organizations as Americans For a Safe Israel (AFSI) and the Human Rights Coalition Against Radical Islam (HRCARI), gathered at the Israeli Consulate in New York City to express their outrage over the intended “Global March on Jerusalem;” an effort by Islamic states and their proxies to delegitimize Jerusalem as the eternal capitol of the Jewish State.

Original reports indicated that close to two million Arabs and international pro-Palestinian apologists would storm Israel’s borders from all sides and infiltrate Jerusalem in order to protest the purported “Judaization” of the city. Taking the threat seriously, Israel put a large amount of reserve military forces on alert for possible call-up, but the numbers were far less that anticipated. Thousands gathered at protest sites in Lebanon, Jordan, Syria and areas of Judea and Samaria. As rock-throwing mobs of protestors attempted to breach the security fence separating Gaza and southern Israel, clashes with Israeli troops ensued.

“We are incensed about the fact that there has to be some contest over Jerusalem,” declared Helen Freedman, Executive Director of Americans For a Safe Israel (AFSI). “The Arabs are outraged over the “Judaization” of Jerusalem and that is simply proposterous. Jerusalem was declared as the capitol of the Jewish people thousands of years ago by King David and it has been and always will be a holy city steeped in Jewish values, law and culture,” she continued.

Addressing the international refusal to condemn the “Global March on Jerusalem,” Ms. Freedman said, “Clearly, this menacing march is being sponsored by Hamas and Hezbollah, who are proxies of Iran and the world sits in abject silence. President Obama’s pastor, Reverend Jeremiah Wright has gone on record supporting this and Obama has not uttered a word of admonishment. The United States Department of State has never officially recoginzed Jerusalem as Israel’s official capitol and they too must be taken to task.”

Holding aloft signs saying, “Jihadi Goal” De-Judaize Jerusalem, then de-Americanize America,” along with Israeli flags and the flags of the city of Jerusalem, the demonstrators chanted, “Jerusalem is Jewish” and “America: Are you In or Out?”

“We are here to vociferously condemn this scandalous and dastardly march on Jerusalem and to show complete support to Israel as the one and only Jewish state,” said Dr. Marvin Belsky, Chairman of the Human Rights Coalition Against Radical Islam (HRCARI). Surrounded by a cadre of Hindu and Indian supporters of Israel, Dr. Belsky said, “For centuries, there has always been a Jewish presence in Jerusalem and Israel has the absolute right to publicly and boldy declare that Jerusalem is its eternal, undivided capitol.”

Also present at the demonstration was long time Jewish activist Glenn Richter, the former Chairman of the Student Struggle for Soviet Jewry and Jeffrey Wiesenfeld, outspoken supporter of Jewish causes and CUNY Trustee.

5 thoughts on ““Jerusalem is Jewish”: Say Protestors in New York”