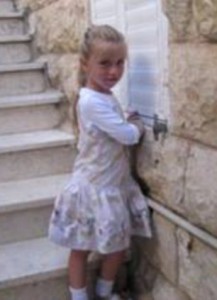 Writing these words and looking at your picture with tears in my eyes, I wonder what kind of man would kill an eight year old girl. What does this person gain by his cruel and heinous act? At the moment I saw your picture in the news as a victim of the shooting, I immediately understood why this tragedy took place.

Myriam, you are another victim of Jihad – an act of pure hatred perpetrated against you. The one who boldly pointed his gun toward your little body had to fulfill the dictates of his [God] Allah – kill the infidel, kill the hated Jew.

I speak of the morning of Monday, March 19th, in Toulouse, France when three children were shot to death. The shooting occurred in front of a Jewish school. The French media reported the tragedy with political correctness in order to appease Jihadist terrorists, which only assures more horrible attacks in the future. We are all responsible for the loss of innocent lives, all of us who deny reality and hide behind political correctness.

The religious convictions swarming in the mind of a devout man who pulled the trigger on an innocent family walking to school one morning included his own peace of mind in knowing that a paradise of eroticism awaits him in the afterlife. By now all the world knows that such a cowardly act will be rewarded by Allah with a provision of 72 virgins in heaven for compensation for a great achievement.

Looking at your picture I sadly realize that you are neither the first nor the last to be a victim of such barbarity. I feel great sorrow that you, at a very young age with all of life before you, departed from us for any reason, least of all by the hands of a religious man abiding in his dogma. But I am so certain that you are in a much better place, between the arms of the Lord, the God of Israel — the true and living God. I pray that your soul be at rest and that He receives you in all His Glory. My heart goes out to those who suffer your loss.

Today, around the world there are thousands like Myriam, kidnapped, raped and murdered by the followers of Allah because of religious doctrine and a culture that hates Jews and despises woman and girls. Yet those who make statements pointing out this truth and speaking out for freedom are considered themselves to be bigots and haters. The information war, the war on words now occurring in Western countries, is raging, the one side convincing normal rational people that it is noble to tolerate the intolerant, that progress for humanity means to condone the acts of Jihad by way of cover-ups with misinformation and erroneous reporting.

As a small child in Egypt, I invariably headed to church with fear of never returning because of Islamic Jihad against the Coptic community. Today throughout the West, many communities are vulnerable to the same threat.

4 thoughts on “In Memory of Myriam”