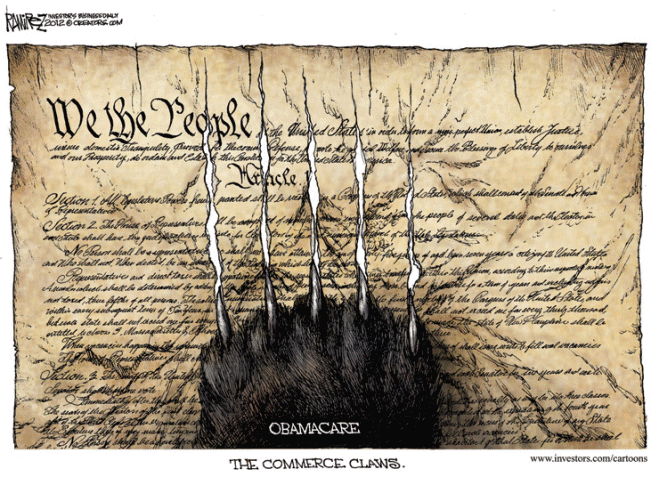 “I think the president is dangerously close to totalitarianism. A few months ago he was saying the Congress doesn’t count. The Congress doesn’t mean anything. I am going to rule by decree and by administrative regulation. Now he’s basically saying the Supreme Court doesn’t count. It doesn’t matter what they think. They can’t review our legislation. That would leave just him as the only branch of government standing.”

CNN hosted former Obama “green jobs” czar Van Jones on Wednesday for yet another interview, and host Soledad O’Brien largely refrained from asking tough questions. TheBlaze.com’s Will Cain was up to the task, however.

Ever since Monday, when President Barack Obama openly challenged the authority of the “unelected members” of the U.S. Supreme Court, which now holds sway over Obamacare, the first image that came to mind was Fidel Castro–whose rule as Dictator is the longest in modern Latin American history.

The result of considerable research on Wikipedia, followed by simple comparative analysis of their life-stages, shows that Obama’s background is so remarkably parallel to Castro’s, suggesting that the similarity in impression is very understandable.

To begin with, both men were born in “non-traditional” family circumstances that carried a “social stigma” during the era of their birth.

Fidel Castro was born in Spain, whose father Angel was born into a peasant family but became a wealthy farmer. Angel separated from his [first] wife, but did not divorce. Then, after several years Angel began a relationship with a household servant thirty years his junior, Lina Ruz González, who came from an impoverished Cuban family. Nonetheless, she became Ángel’s “domestic partner”, and bore him three sons and four daughters.

Fidel was Lina’s third child, born at his father’s farm on August 13, 1926–but given his mother’s surname of Ruz, rather than his father’s–because he had been born out of wedlock, which carried a severe social stigma at the time, in heavily Roman Catholic Spain.

When Fidel was just six years old, he and his elder siblings were sent to live with their teacher in Santiago de Cuba. At eight years old, after being baptized into the Roman Catholic Church, he bounced around several schools, due to his misbehavior, including the La Salle boarding school in Santiago, then the privately-funded, Jesuit-run Dolores School in Santiago.

Angel Castro finally dissolved his first marriage when Fidel was fifteen, allowing him to marry Fidel’s mother, Lina. Afterwards, Castro formally recognized Fidel when he was seventeen, legally changing his surname from Ruz to Castro.

In late 1945, Castro began studying law at the University of HavanaHere he became immediately embroiled in the student protest movement, and becoming passionate about anti-imperialism, connecting with several leftist student groups at the time.

Then, in 1947, Castro joined a newly founded socialist group, the Party of the Cuban People, formed by veteran politician Eduardo Chibás, who was a charismatic figure that attracted many [working class] Cubans with his message of social justice, honest government, and political freedom. Castro, considered Chibás his mentor.

Castro moved even further to the left in his political views, influenced by the writings of Marx, Engels and Lenin, leading him to believe that capitalism, or the “dictatorship of the bourgeoisie,” was causing the societal problems in Cuba, rather than the failings of corrupt politicians.

The Marxist idea that true political change could only be brought about by a revolution led by the working class, consumed Castro, and he set about visiting Havana’s poorest neighbourhoods, witnessing the nation’s huge social and racial inequalities, and became active in the University Committee for the Struggle against Racial Discrimination.

To make a long story short, Havana fell to the “revolution” on January 2, 1959, and Castro entered Santiago, to accept their surrender, and gave a speech to the assembled crowds independence from the Spanish Empire. He also praised the role that women had played, and proclaimed that they would have equal rights in the new Cuba.

Castro immediately became a heroic, “Christ-like figure” and wearing a medallion of the Virgin Mary, with cheering crowds meeting him at every town on his way to Havana. Along the way he gave speeches, press conferences and interviews–as U.S. and other foreign reporters noted that the public adulation of Castro was on an unprecedented scale.

In 1961, using Marxism-Leninism as his guiding ideology, Castro proclaimed the socialist nature of the Cuban revolution, followed in 1965 by becoming First Secretary of the newly founded Communist Party–abolishing all other parties.

He then transformed Cuba into a Socialist republic by nationalizing industry, then introducing free healthcare and education to everyone, while suppressing any opposition.

In their book, Corruption in Cuba, Sergio Diaz-Briquets and Jorge F. Pérez-López Servando state that Castro “institutionalized” corruption and that “Castro’s state-run monopolies, cronyism, and lack of accountability have made Cuba one of the world’s most corrupt states.”

Castro established the “Comandante’s reserves” in 1970, from which he allegedly “provided gifts to many of his cronies, both home and abroad”. Gonzalez asserts that Comandante’s reserves have been linked to counterfeiting business empires and money laundering.

Finally, Leycester Coltman’s book, entitled The Real Fidel Castro (2003), described Castro as being “fiercely hard-working, dedicated[,] loyal… generous and magnanimous,” but also noted that he could be “vindictive and unforgiving” at times.

Coltman noted that Castro “always had a keen sense of humour and could laugh at himself,” but could also be “a bad loser,” reacting with “ferocious rage if he thought that he was being humiliated.”

Now, for the contemporary mirror image…

Briefly, Barack Obama was the product of an interractial marriage between a white American women and a black Kenyan man in Hawaii on August 4, 1961. Obama’s parents, met in 1960, married on February 2, 1961, separated shortly after Obama’s birth, finally divorcing in 1964.

After her divorce, Obama’s mother married Indonesian Lolo Soetoro, a foreign student in Hawaii; but, in 1967, he had to return to Indonesia, so Barack moved with them, from age six to ten, attending local schools in Jakarta.

In 1971, Obama returned to Honolulu to live with his maternal grandparents, and attended a private college preparatory school, from fifth grade until his graduation from high school in 1979.

Obama has written about having struggled as a young adult to reconcile the social perceptions of his multiracial heritage, and has also written and talked about using alcohol, marijuana and cocaine during his teenage years, to “push questions of who I was out of my mind.”

Barack Obama attended prestigious Columbia University in New York, then Harvard Law, where he became involved in leftist organizations, and identified strongly with people like Saul Alinsky, the “father” of Community Organizing.

After graduation, Obama became obsessed with the working poor, as a Community Organizer on the South Side of Chicago, taught University level classes related to Constitutional law, working briefly at a law firm, and then entered politics on the state level, quickly rising to the national level, where he earned the designation as the most Liberal member of Congress.

He has been labeled “the Messiah,” because of the charisma that he uses to entrance people, selling them on the idea of having equal outcomes, sharply implying wealth re-distribution, espousing a hatred for those who have worked hard and earned, while disregarding the law wherever it suits.

Obama is committed to remaking the United States into his own [failed] vision of socialism, by fostering an uprising of class warfare, racial discord and his latest invention–the Republican “war on women,” through any means at his disposal–no doubt including a “social revolution.”

In the end, it seems that Fidel Castro and Barack Obama share a psychological telltale–they both exhibit irrefutable symptoms of Aggressive Narcissism, which include superficial charm, grandiose sense of importance, pathological lying, lack of remorse, are manipulative, and unable to accept responsibility for their own actions.

Deliver us all from evil and socialism in November 2012.