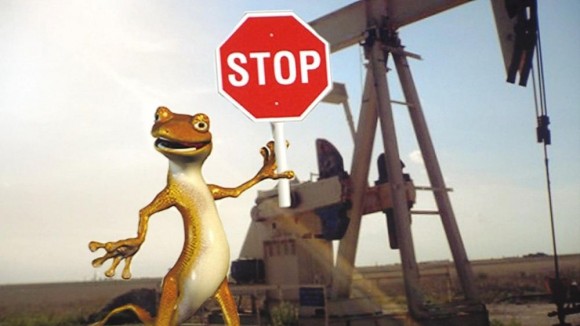 As part of a recent swing through several states, President Obama “flew to southeastern New Mexico to examine federal lands where 70 rigs are pumping oil,” The New York Times noted, as if this was proof of the President’s commitment to energy independence and security. A photograph during the brief stopover showed Obama giving a ten-minute speech against the backdrop of drilling rigs.

The Times reported that Obama had declared, “Under my administration, America is producing more oil today than at any time in the last eight years.”

It was a classic case of White House media manipulation and deception.

The rest of the story, as noted by New Mexico Rep. Steve Pearce, is that “While oil production on private lands has increased, according to the Institute of Energy Research, oil production on federal land was down 11% in 2011.”

What the Times and other media also neglected to mention was the threat to oil drilling in New Mexico and West Texas by the proposed federal listing of the Dunes Sagebrush Lizard as an endangered species.

Hence, the administration’s record of increases in gas prices, delays in energy production, and federal loans to failed green energy businesses, could get worse.

As the local paper, The Gonzales Cannon, noted, Patterson has declared that Texas will sue the federal government if it lists the lizard and other previously-unheard-of species on the Endangered Species List, thereby limiting development of West Texas land for oil, gas and heavy-metals exploitation and production.

Speaking at Faye Hardin’s “Insight USA” conference in Lubbock, Texas, on March 29, Texas Senate Republican candidate Ted Cruz seized on the issue as well, saying that in Texas, “we talk more about that lizard than the Geico lizard.” He said, “That’s our lizard,” quickly adding, “They make darn fine boots.”

Cruz, who brought participants in the Faye Hardin conference to their feet, is running in the Senate Republican primary on May 29 with the support of Tea Party groups. He also has the support of prominent conservatives, including former Reagan Attorney General Ed Meese, Tony Perkins of the Family Research Council, and Senator Jim DeMint, chairman of the Senate Conservatives Fund.

Item number five in the Cruz “Jobs and Growth Agenda” emphasizes the problem of “reptile dysfunction.” It says Cruz will “restrain abusive environmental enforcement,” explaining, “To protect a lizard, the Obama administration is trying to stop oil and gas exploration in West Texas. Even more ominously, if the Obama administration succeeds in banning hydraulic fracturing—which has opened vast new reserves of oil and gas—tens of thousands of jobs will be lost and America will be left even more dependent on foreign dictators for our energy needs.”

Rep. Pearce of New Mexico says, “New Mexicans are faced with the threat of losing their jobs in the oil fields as a direct result of this administration’s determination to list the dunes sagebrush lizard as endangered.”

He adds that “The President claims that he is increasing production, but the reality is that his policies are killing oil and gas jobs and have resulted in the decline of oil production on federal land.”

As one who has visited West Texas twice in the last year, the untold story on the national level is that citizens of the region, including southern New Mexico, are up in arms over what the federal government is doing—and threatening to do—to their livelihoods. Protests against the federal government have drawn thousands of people.

The local media are doing a far better job of reporting the facts than the national media. Channel 4 in Albuquerque ran a story about the anti-lizard protest that greeted Obama. “Not everyone at the airport in Roswell was there to give President Barack Obama a warm welcome,” the station noted in a story complete with video. “A group of protesters were speaking out against federal protection for the Dunes Sagebrush Lizard. The protesters said putting the lizard on the endangered species list would make drilling in southeastern New Mexico more difficult.”

Citizens in New Mexico are distributing a flyer that says a final decision to list the lizard will be at the sole discretion of U.S. Fish & Wildlife Service Director Dan Ashe, and that he may make a ruling in June.

They say the impact will be the following:

They have a Facebook page “Protest the Listing: Lizard 2012.”