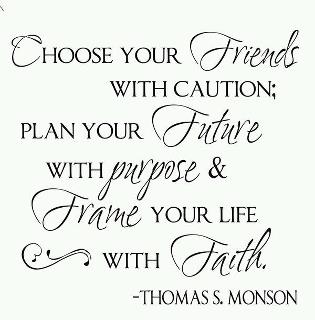 I ran across a photo by Lexie Garrett this morning, a short piece of advice from Thomas S. Monson, President of the Church of Jesus Christ of Latter Day Saints. The more I thought about it, the more its simple message needed to be shared.

“Choose your Friends with caution; Plan your Future with purpose & Frame your life with Faith.”

Those we associate with ultimately determine the kind of people we want to be. I figured out a long time ago that I’d rather be considered the dull pointed pencil in the box; that meant that all the others would be able to sharpen my skills. Eventually, rubbing shoulders with good people, folks who have refined tastes in music, literature and the arts, their attributes will become my own; at least that’s the plan.

“…at least that’s the plan;” how’s that for a smooth transition to the next part of Thomas Monson’s advice? I heard a talk at General Conference several years ago; wish I knew who said it. It was either Gordon B. Hinckley or Thomas S. Monson (learning how to use a search engine would be nice); regarding his observation of a young hitchhiker. The fellow had his thumb out looking for a ride, but when asked which direction he was headed the young man said something to the effect, “Doesn’t matter, anywhere will do.” How sad; the young man had no plan of action, no dream to drive him steadily forward towards its accomplishment. He was adrift on the current as a leaf with no purpose.

It’s been said that a bad plan is better than no plan at all. Motivational speaker Zig Ziglar told the story of a young man, it may have been his brother, who boldly stated he was going to have the best year in sales ever; but when asked what he’d done the year before he didn’t know.

Zig went on to say, “If you don’t keep good records how will you know you’re improving?”

Keep a journal, write down what you did, how many people you talked to, record your sales and your expenses in such a way as to be able to look back and mark your progress. Your mind will kick into the next gear once you give it an incentive; then watch how quickly you reach your goals.

The same can be done with other aspects of your life. Did you say your prayers, read your scriptures, call your folks to tell them how much they mean to you or any number of individual entries to mark your progress toward becoming a better individual? Write these down. How else will your brain know these activities are important, important enough to have been written down? There is a method to this madness; training your brain to move you in a specific direction rather than letting it sit in neutral while the rest of your life floats by.

I was about to say, “Trust me, it works.” Wouldn’t that be almost the same as saying, “Frame your life with Faith?” For years I’ve kept a telephone message book to record each business call that came in; the date, customer’s name, request for type of service and the amount quoted. At the end of the day each entry would be checked off as completed or a line drawn through it if the call never came to fruition. Along the edge of the book was a running total of sales for that week so I could determine how close our small business was to “projected budget.” I knew at a glance how much money was coming in and since most of our expenses remain the same, these figures showed our progress toward profitability.

Even when business takes a downward turn, having faith in a system that has worked in the past makes it easier to plan for the future. Having been in business for well over thirty years, I can remember having had some rather depressing sales figures; but they were always followed by a return to profitability as long as I continued to work. Some of you are saying, “Work, I knew there was a catch.” Yes, all this requires effort.

Have a little faith; after all, your Father in Heaven knows your needs and desires.

“Are not two sparrows sold for a farthing? and one of them shall not fall on the ground without your Father.
But the very hairs of your head are all numbered.
Fear ye not therefore, ye are of more value than many sparrows.”

Break time is over, time to get on with your life. Figure out who you’re going to spend time with, folks who will improve your life and lift you to the next level. Figure out what you’re going to do with the limited time you have and just do it. Have a little faith and get back with me in a few years to compare notes.