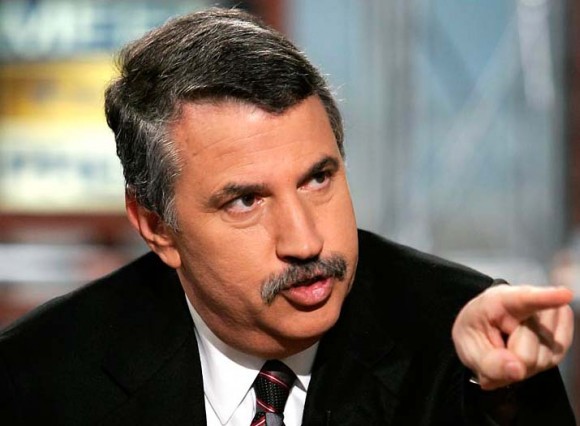 “Palestinians need to accompany every boycott, hunger strike or rock they throw at Israel with a map delineating how, for peace, they would accept getting back 95 percent of the West Bank and all Arab neighborhoods of East Jerusalem and would swap the other 5 percent for land inside pre-1967 Israel.”

Friedman knows very well that rocks are not a peaceful means to a peaceful end. He was attacked by Palestinian Arab rock throwers who stoned his car on Jerusalem’s Salahadin Street in 1988, just before leaving his job as the Jerusalem-based bureau chief of the Times. Friedman did not think of rocks then as peaceful protest.

“If I had a gun I would have blasted the faces of all those sons of bitches,” Friedman reportedly yelled, returning from the Arab side of town to the Times office, then at Rivlin Street in the mostly Jewish downtown center. Apparently, he never mentioned the incident—or his strong reaction to it—in his many books or columns.

After Friedman’s rocky ride, Yoram Ettinger, then-head of Israel’s government press office, told Friedman his experience ought to make him a bit more sympathetic to Israelis who Friedman called “trigger-happy” and who often get stoned (and killed) by Arab rocks, but generally do not kill all the Arabs in the area at the time.

It is perfectly understandable why Friedman was upset at the time. Getting stoned is no laughing matter, and women are sometimes still stoned to death for alleged indiscretions in certain Muslim countries. In the Mid-East, rocks are not a tool for peace, but are usually seen as a form of punishment, even capital punishment.

So Friedman was right to be upset. He was hypocritical not to report it then and is hypocritical to treat Arab rocks as a natural part of “bargaining,” where Arab attacks in 1967 are repaid by the Arabs getting all the land back they used to attack Israel.

Friedman’s piece on rocks and peace also lauded Palestinian mass murderer Marwan Barghouti, head of the Tanzim organization within Yasser Arafat’s Fatah movement. Barghouti is serving five life sentences for several murders, but Friedman and some left-wing Israelis, want to forget this too.

Forgetting and forgiving the rocks and mass murder was hypocrisy then and now. Friedman likely felt it was not wise to recall his stoning and antagonize Arab readers. He and other Times reporters often “forgot” or ignored Arab violence or threats against reporters when covering Arafat’s PLO in Beirut in the 1970′s and 1980′s. Friedman and his colleague John Kifner wrote about how the PLO “protected” journalists, rather than the real picture of how it and its Syrian ally harassed and threatened them. Reporters from other newspapers and TV outlets did likewise.

It is good the Times published former NY Mayor Ed Koch’s letter criticizing Friedman for treating Arab rock throwing as nonviolence, but this does not begin to scratch the warped way Friedman and The New York Times have dealt with Arab-Islamic extremism and terrorism.

When the U.S. was attacked on 9-11, most of the terrorists were Saudis, but Friedman helped Saudi leaders sell themselves as moderates offering peace to the entire Middle East. He regaled readers with tales of a trip to the Saudi king’s horse farm to hear about a “peace plan” whose details later proved less than peaceful.

Meanwhile, the Saudis got a badly needed image re-make, blurring the fact that not just most 9-11 terrorists were Saudis but that Saudi royal money and Saudi exports of Wahhabi Islam and the Muslim Brotherhood enabled the 9-11 terror.

When Friedman rarely and gingerly alludes to Saudi faults or to Arab terrorists, he only does so by first equating them with Israelis, usually Israeli settlers, comparing “the Muslim Wahhabi extremists who are choking Saudi Arabia’s future and the Jewish Wahhabi settlers who are doing the same to Israel.”

Comparing all “settlers”—mostly law-abiding people in the suburbs of Jerusalem and Tel Aviv—to Wahhabi fanatics or terrorists is a mockery of analysis. It is like calling rocks a path to peace or treating a mass murderer as a peacemaker.

Dr. Michael Widlanski is the author of Battle for Our Minds: Western Elites and the Terror Threat just published by Threshold/Simon and Schuster. He was a reporter, writer, correspondent and editor for The New York Times, The Cox Newspapers and The Jerusalem Post, respectively, and also served as strategic advisor for Israel’s Ministry of Public Security.

US Rep. Allen West (CD 22) speaks at a tax day rally in Wellington, Florida on April 15, 2012 and calls out Obama. The silence from the other side is deafening! Why have an honest debate about actual issues when you have lies, distortion, rhetoric, empty slogans, personal attacks, sound bites, bumper sticker brilliance, voter fraud and lapdog media spinmeisters on your side libs and lefties! That’s what’s left when you have no positive record to run on, no new ideas (just warmed over 20th Century already tried and failed big government solutions that create more problems than they solve) and nothing positive to say, absolutely nothing! Rep. West asks in the video what the other side’s vision of the future is. I’ll tell you what it is, it’s already here on the other side of the ocean (and its not a pretty economic picture, its actually quite grotesque)…..”The United States of Greece/Italy/Portugal/Spain/Ireland” and “have a nice day”.

Occupy Wall Street is bouncing back after a sleepy winter with Spring Training, hoping to unite and better organize supporters by their next major campaign push — May 1, 2012. Watch the video to learn about the group’s new techniques and get a glimpse of the latest protest on April 13, 2012.

Why would President Obama want to petition the Republican-led House of Representatives, for another $52 million in tax-payer money to pay for more investigators and regulators to hunt down infractions, for which there is not any evidence or data found to even support their existence?

Obama said the plan would put “more cops on the street” to catch speculators who attempt to manipulate markets for their own profit.

And, while he had the [mainstream] media gathered in the White House Rose Garden, he also took the opportunity to chastise Congress for recently voting against ending tax breaks to U.S. oil companies.

Obama concluded by saying that passing this proposal would help members redeem themselves, according to a FOXNews article today.

As state above, the problem Obama has is lack of probable cause.

Even though many Democrats blame speculators for the high cost of gasoline–they would not go as far as to say that market manipulation is responsible for rising gas prices.

The President Obama, with Attorney General Eric Holder by his side, armed with nothing but a convenient Liberal myth supported by the Democrat party, want to portray “oil speculators” as being evil, and even, quite possibly, criminal–for their voter base.

However, the reality lacks the necessary drama, as investment in oil futures contracts are conducted by pension funds, mutual funds, hedge funds, exchange traded funds and other investors–all of whom already operate in the most heavily regulated environment on Earth.

As the latest figures show that about half of all Americans own stocks and investments, directly or indirectly–most likely the half that pay 99% of all federal income taxes–half of America could be involved in oil price speculation at any given time.

Regardless, even though the weighted positioning of these futures contracts are betting that oil prices will rise–‘analysts can only say … it’s possible … speculation has somewhat inflated the price of oil.’

In other words, there is no proof–beyond a reasonable doubt.

In fact, actual studies of the effects of speculation on oil markets indicate that … ‘it probably increases volatility, but doesn’t have a major effect on average prices.’

When gasoline hit $3 a gallon in 2006, even President George W. Bush launched such an investigation, declaring Americans “don’t want and will not accept … manipulation of the market. And neither will I.”

Then, just last year, when prompted by the sting of rising gasoline prices, Obama and Holder announced the creation of a ‘task force,’ to ‘look into fraud in the [oil] energy markets.”

Unfortunately for President Obama, the only energy market fraud case that has been launched, after these six years of bi-partisan investigations, is the sudden bankruptcy of Solyndra Solar, which claimed $535 million in taxpayer money, along with 1,100 new, highly touted “green jobs of the future.”

According to a FOXNews poll released yesterday, included in the article attributed above, 47% of registered voters feel the price of gasoline is an “extreme treat” to our economic recovery, quickly followed by another 40% who feel that it is a “somewhat serious threat,” with only 13% who disagree.

Obviously, the price of gasoline, which touches virtually every voting American, is an “on fire” issue that will likely negatively affect President Obama in this election year.

Equally alarming for the president is that 50% of those polled believe that he can do something about gasoline prices–but doesn’t want to; while 47% polled feel he can’t do anything about gas prices, but wants to. Only 3% “didn’t know.”

Ironically, if the “don’t know” 3% of those polled, followed history to ultimately vote against the incumbent, and were combined with the 50% from above, for a total of 53%, which was then set against the stalwart 47% from above…

It creates an exact, as well as feasible, electoral-inverse of outcome for Barack Obama in November 2012–defeated by 53% to 47% in the voting booths.