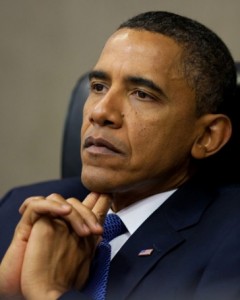 Campaigning non-stop since 2008, except for his frequent golfing and vacation adventures, he has never ended his ongoing run for POTUS. On Saturday 5 May, Obama continued along this course and gave, yet, another campaign speech on Saturday 5 May. Although repeating one of his oft-used campaign mantras that the upcoming 2012 elections “will be a make or break moment for the middle class,” as Obama has actually been summarily and purposefully destroying jobs and the economy of the middle class, I believe an accurate translation is needed. That translation is: “The 2012 elections will be a make or break moment for Marxism, my forced imposition of totalitarianism, the complete bending and surrender of Americans to my will and the destruction of their God-given freedoms, religion and liberties!”

The reality of ObamaGov is that the US dictator-in-chief has been installing his (or Soros’) own version of a combination Marxist/Maoist/Fascist/Nazi/Islamist/Black Liberation government since he usurped the office of president of the United States. Despite any ‘pesky’ US elections (which we suspect are already heavily and illegally rigged by his syndicate in Obama’s favor), if by some miracle he actually loses reelection I predict that Obama will not leave We-the-People’s White House voluntarily.

Note: Since Obama was selected, he has acted neither honorably nor legally in virtually any of his dealings. So why would anyone think he would begin when and if the upcoming election does not go in his favor?

Since his first days illegally (ineligibly) holding the office of president of the United States, Obama began issuing [illegal] Executive Orders…the first was to hide all of his birth records, school transcripts and anything else that might tell us the truth about who Barack Hussein Obama really is. The latest Executive Orders issued by Obama include both the subjugation of the USA to International regulatory commissions (to be created and named) and place the USA closer to becoming the “North American Union” and eliminating both our sovereignty and the need for US citizenship–which have already been greatly diminished…if not decimated…by Obama. It also appears that due to the sheer number of EOs issued by this man that some appear to not even be numbered anymore while others that greatly work toward removal of our sovereignty may not even be published for public viewing. This is truly the most opaque and obscure presidency in the history of what was once our country. Hiding everything this regime (aka syndicate) does is always the ongoing order of each and every day.

The establishment of a suppressive totalitarian government which rules the serfs (aka “former US citizens”) is the goal of the despotic and tyrannical Obama syndicate. And if we do not accept our serfdom, the so-called FEMA (aka “retraining”) camps beckon us with an uncanny and vicious malevolence. I have written multiple columns on this subject but, for any who are still uncertain I highly recommend Doug Hagmann’s article “The planned re-election of Obama, revolutionary style” in which he chillingly writes:

The Obama administration, including his czars and along with his closest Progressive supporters, are planning a manufactured insurgency against America. He is using the media to his advantage to garner both sympathy and support for his unfinished goals. He is desperately seeking a way to remain in office, even if it means the surreal prospect of an indefinite postponement of elections – if it can be pulled off. So far, he’s got the support of the majority of the DHS “brass” behind him, according to my source.

Wonder why those on-the-ground and black helicopter military drills and heavy equipment shipments (including hundreds of tanks and artillery) have been ongoing nationwide for months now? The answer strongly and, now, corroboratively seems to be that the Obama syndicate is planning to foment all manner of violence and civil disobedience (using his bought and paid for with our money “Occupiers,” New Black Panthers and general mercenary roving mobs) in order to take our country and all of We-the-People down. The ObamaPolice have already begun shutting down meetings that involve supporting the US Constitution. When CAIR complained that a pro-Constitution meeting was being held, the Allegan, Michigan Police Department shut the assembly down. Free speech–unless its agreed to by the ruling Marxist-Islamist class–is now verboten.

We have already lost our country. And are now down to a single question. Do we have the courage and honor to do that which is necessary to take our country back or are we now willing to go quietly to the slaughter the ObamaGov has planned for us?

The End Game is now being played…and it’s solidly against us.

“And the people shall be oppressed, every one by another, and every one by his neighbour: the child shall behave himself proudly against the ancient, and the base against the honorable”
–Isaiah 3:5

“Call unto me, and I will answer thee, and show thee great and mighty things, which thou knowest not”
–Jeremiah 33:3

The planned re-election of Obama, revolutionary style
at canadafreepress.com