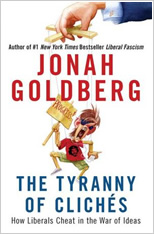 Purchase from Penguin.com or Amazon

Jonah Goldberg has written an incredible new book – The Tyranny of Cliches: How Liberals Cheat in the War of Ideas. That boy can write! 🙂 His premise is that conservatives have a distinct ideology connected to individual and economic freedom, but liberals refuse to concede that they have an ideology at all. It’s the old ‘be vague’ at all costs and baffle them with bullshit routine. Unfortunately, many fall for this crap and it is deadly to our freedoms. Liberals label conservatives as ignorant and dishonest in order to achieve their goals and accomplish their progressive agenda.

“They’re always questioning the motives of the right,” Goldberg said of liberals as they find themselves on the losing end of disagreements with conservatives.

“Since they can’t admit they have an ideology of their own, it manifests itself in weird places, and it comes out in these cliches.”

Goldberg explains that such cliches may come out as seemingly harmless, but in reality are deeply loaded ideological arguments. Examples Goldberg gave on the show were the term “social justice” and the phrase “one man‘s terrorist is another man’s freedom fighter.”

When asked by Will Cain what Goldberg believes the real liberal ideology is, the author speculated that it is the progressive dogma that “the state is the engine of history.”

And here’s an appetizer from the book:

There’s a kind of argument-that-isn’t-an-argument that vexes me. I first started to notice it on university campuses. I’ve spoken to a lot of college audiences. Often, I will encounter an earnest student, much more serious looking than the typical hippie with open-toed shoes and a closed mind. During the Q&A session after my speech he will say something like “Mr. Goldberg, I may disagree with what you have to say, but I will defend to the death your right to say it.”

Then he will sit down, and the audience will applaud. Faculty will nod proudly at this wiser-than-his-years hatchling under their wings. What a glorious moment for everybody. Blessed are the bridge builders.

My response? Who gives a rat’s ass?

First of all, my right to speak never was in doubt. Indeed I’m usually paid to speak. Besides, I’ve given my speech already and we’re in the Q&A time: Shouldn’t you have told me this beforehand? Second, the kid is almost surely lying. He’ll take a bullet for me? Really?

Clichés like these are a way to earn bravery on the cheap, defending principles you haven’t thought through or perhaps only vaguely support. Or, heck, maybe he really would leap on a grenade so I could finish talking about how stupid high-speed rail is. But it still doesn’t matter, because mouthing these sorts of clichés is a way to avoid arguments, not make them.

Yeah! What he said!! I love this book. It’s intelligent, cutting, entertaining and exposes liberal ideology for the dishonest propaganda that it is. Jonah is not only a brilliant author, he has a spine and tells the truth. My kind of pundit. In the daily battle against the Left, this book provides ammunition to spar with. It’s red meat for the conservative warrior.

If you loved his book Liberal Fascism, you’ll adore The Tyranny of Cliches: How Liberals Cheat in the War of Ideas. With the most important election of our lifetime bearing down on us, this book is one you must get and read and read again. Jonah says it so well in his book – he takes a multitude of liberal cliches and disarms them for you. And he does it with wit and passion. It is small wonder he is so admired in the conservative blogosphere.

One thought on “The Tyranny of Cliches – A Book Review”