“If anyone in your circle says they’re unhappy with candidates and might not bother to vote this year, send them this link.” — Dave Perkins

And now this from I OWN THE WORLD:

Obama’s Talk With His Spiritual Adviser

“When I think about those soldiers or airmen or marines or sailors who are out there fighting on my behalf and yet feel constrained, even now that ‘Don’t Ask Don’t Tell’ is gone, because they are not able to commit themselves in a marriage, at a certain point, I’ve just concluded that for me personally it is important for me to go ahead and affirm that I think same sex couples should be able to get married,” President Obama told ABC News.

Hunter says he told the president he disagreed with his interpretation of what the Bible says about marriage. Hunter says the president reassured him he would protect the religious freedom of churches who oppose gay marriage.

“I’m disappointed, not entirely surprised, because he thinks with his heart,” said Hunter, who said the announcement makes it harder for him to support Obama, but he will continue to do so.

“He knew where I stood, because I’m an evangelical and I believe in what the scripture says. One of the reasons he was calling was to protect our relationship and give me a ‘heads up’ on an interview he had just done,” Hunter said. “It wasn’t something we were able to talk through, or I would have talked him out of it.”

Hunter said the president made it clear that he did not come upon the decision lightly. “He told me how much he prayed and how difficult a decision this was for him.”

Hunter said he prays regularly with the president and last February, Michelle Obama visited his church. 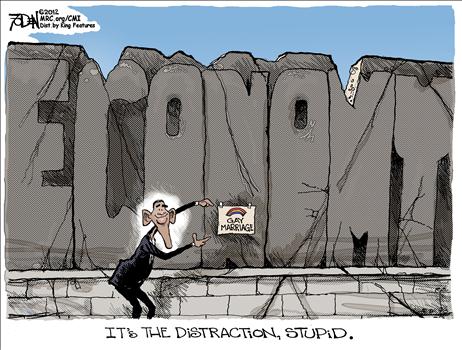 Gulag Bound is a newbie on the scene. We came about on July 4, 2010. Granted, those involved in our research, development, and presentations have been around numerous blocks (and quite a few blocs) and numerous times.

We do follow in the footsteps of heroes. (The common phrase ends in “giants,” but we recognize no uberhumans. Even Nietzsche is dead, as Mark Musser has reminded and to at least my knowledge never even had a begotten son.)

In America, when it comes to opposing the ground war against our sovereignty, freedom, livelihoods and lives known as Agenda 21, we gratefully follow along with Three Musketeers and one d’Artagnan. Of course there are others also worthy of mention; some we have and will again.

Conveniently, all four have Web sites and since they do, rather than expound at length, we will show you videos featuring each. We Citizens should know their work well and continue to follow them. Here they are, listed in a suggested order of those videos.

Tom DeWeese – President of the American Policy Center and editor of the DeWeese Report (americanpolicy.org and deweesereport.com, respectively – bio).

Patrick Wood – Editor of The August Forecast & Review (augustforecast.com – bio). He is our d’Artagnan, due to his intent focus upon the overlapping subjects of technocracy and globalist power-brokering not strictly Agenda 21.

So, check in with them as well as Gulag Bound’s tag, Agenda 21, when in doubt about green this, sustainable that, and whimpering demise of United States of America the other.

And if you don’t want that to happen, get involved – with their efforts and the Sovereignty Campaign, to vet political candidates according to this core and foundation of America, sovereignty, without which we are no more.