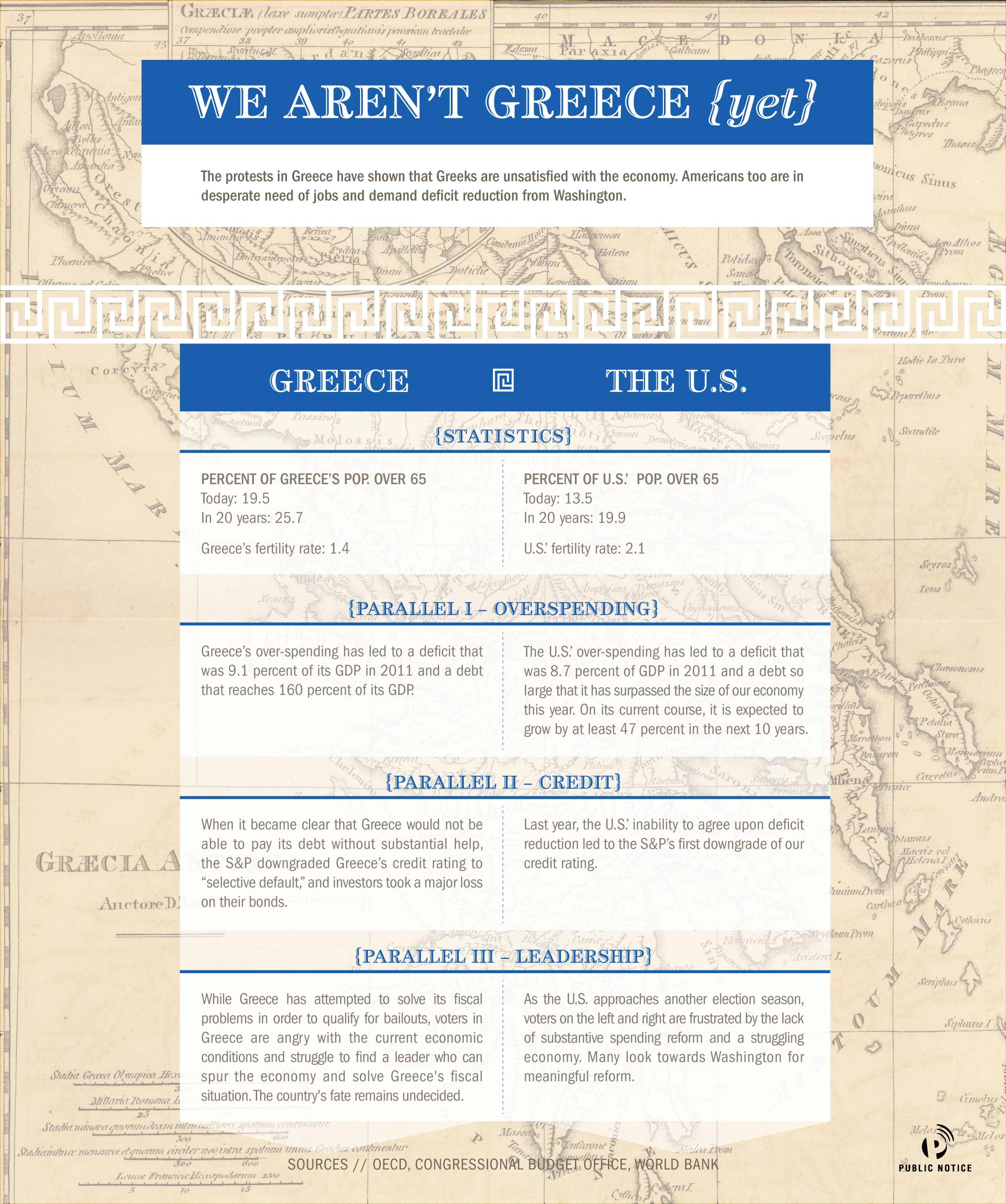 The protests in Greece have shown that Greeks are unsatisfied with the economy. Americans too are in desperate need of jobs and demand deficit reduction from Washington. Check out our latest infographic on the statistics of the two countries and their three main parallels.

Fox News reported a story this morning about next week’s issue of Newsweek magazine. By some accidental quirk did Newsweek let the cat out of the bag when they called Barack Hussein Obama, ‘The First Gay President’? Fox News ran their story with this headline: 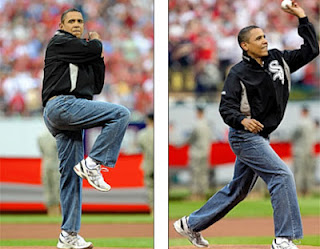 What else can one say after seeing our Great Leader throw out the opening pitch of the baseball season and tossing the ball like a girl? The cover story in Newsweek was all about the recent announcement by Barack Hussein Obama coming out in favor of same sex marriage. But there may be another side to the story. A much darker side that some people went to great lengths to cover up. Newsweek’s slip of the lip may help to re-invigorate some interest in those old stories from Chicago that involved gay sex, cocaine and murder. There were lots of rumors in Chicago from the 1990’s time period about a young Illinois politician named Barack Hussein Obama having very close contacts with certain homosexuals and drug dealers. And some unsavory attempts to cover it up.

Maybe we need to reexamine the accusations of one Larry Sinclair, from Chicago. You probably don’t remember him, he was buried by the news media. Read these two excerpts, below, from a 2009 story posted on Canada Free Press:

Sinclair asserts that he met Obama twice in 1999. Their rendezvous was orchestrated by limo driver, Jagir Multani. Sinclair avers that Multani may have been in the United States illegally. Sinclair alleges that Obama smoked crack cocaine and directed Sinclair to administer a Lewinsky—which Sinclair obliged. According to Sinclair, the following day Obama materialized at Sinclair’s hotel to solicit supplementary Lewinskyization. That was the entirety of their affair, per Sinclair. Expecting to be serviced with no impulse to reciprocate is certainly consistent with Obama’s consummate narcissism.

If Obama habitually enjoyed these sorts of trysts, we would presume others witnesses would surface. To date, no one else has gone public with comparable reports. Maybe the late Donald Young, choir director at Trinity United Church of Christ in Chicago could have confirmed that Obama didn’t indulge in this type of conduct. Sadly, Young was murdered on December 23, 2007.

The forty-seven-year old choirmaster had attended Obama’s church since the age of twelve.

Or even this one, just a book review, posted on Prison Planet. It has a few more details.

OBAMA AND THE LARRY SINCLAIR AFFAIR

[…]Sinclair’s book would discuss his homosexual and cocaine sharing experiences with then Illinois State Senator Barack Obama in November 1999 and the events that followed after Sinclair’s public disclosure of these events on YouTube in January 2008.

I had been following Sinclair’s story on the Internet since February 2008. Having been a Press Officer in the US Army and an Internal Auditor, I was familiar with what can happen when the media turns against you and more importantly the patterns of people who tell the truth and those who don’t. What impressed me most over the following nine months was Sinclair’s story stayed the same, that on multiple occasions efforts were made to silence him on the Internet, and yet he persisted in the face of threats of murder to him and harm to members of his own family.

This books reeks of the truth and the words and style of Larry Sinclair. It is not “ghost-written”. It is not a literary masterpiece and there are several typographical and grammatical mistakes. Most importantly it tells the true story of a man committed to exposing the truth. Sinclair pulls no punches and does not hide behind any equivocations about his past or his many flaws. He does provide very specific details about the dangerous journey he has taken to get the truth published, to speak truth to power. While parts of the book were previously published on his websites, he adds much more detail about what happened at the Democratic National Committee meeting in May 2008, the storm trooper tactics by the DC Metro Police after his appearance at the National Press Club in June 2008, the false charges initiated by Joe Biden’s son, Attorney General Beau Biden in Delaware, the continued failure of the Chicago Police to investigate the murder of Donald Young in December 2007, the openly gay choir master of Obama’s Trinity United Church of Christ, and of course the very specific details about President Obama’s private parts.

It is shameful that the various mainstream media have refused to follow up on Sinclair’s story, to challenge him on the facts, to challenge Joe and Beau Biden and the DC Metro Police on their false charges and imprisonment of Larry Sinclair in June 2008. Just imagine if they and the powerful interests they represent can do this to relatively unknown Larry Sinclair, what can they do to you?

“Barack Obama & Larry Sinclair Cocaine, Sex, Lies & Murder?” is a book worth reading for all those who seek the truth, an example of what a little, flawed man with incredible courage and persistence can achieve in speaking truth to power. Job well done.

Or even this one, originally posted on The JagHunter blog. Here it is reposted on The Fellowship of the Minds web site:

President Obama and his chief of staff Rahm Emanuel are lifetime members of the same gay bath house in uptown Chicago, according to informed sources in Chicago’s gay community, as well as veteran political sources in the city.

The bath house, Man’s Country, caters to older white men and it has been in business for some 30 years and is known as one of uptown Chicago’s “grand old bathhouses.” WMR was told by sources who are familiar with the bath house that it provides one-year “lifetime” memberships to paying customers and that the club’s computerized files and pre-computer paper files, include membership information for both Obama and Emanuel. The data is as anonymized as possible for confidentiality purposes. However, sources close to “Man’s Country” believe the U.S. Secret Service has purged the computer and filing cabinet files of the membership data on Obama and Emanuel.

Members of Man’s Country are also issued club identification cards. WMR learned that Obama and Emanuel possessed the ID cards, which were required for entry.

Obama began frequenting Man’s Country in the mid-1990s, during the time he transitioned from a lecturer at the University of Chicago Law School to his election as an Illinois State Senator in 1996. Emanuel, reportedly joined Man’s Country after he left the Clinton White Hosue and moved back to Chicago in 1998, joining the investment firm of Wasserstein Perella and maintaining his membership during his 2002 campaign for the U.S. 5th District House seat vacated by Rod Blagojevich, who was elected governor.

However, Man’s Country was not the only location for Obama’s predatory gay sex activities. The Chicago gay community is aware that Obama often made contacts with younger men at his famous “pick-up basketball” games. It was at these “pick up” matches where Obama first met Emanuel and a young Democratic campaign worker and senior bank vice president named Alexi Giannoulias. Currently running for Obama’s old U.S. Senate seat now occupied by Roland Burris, Giannoulias successfully ran for Illinois Treasurer in 2006 after being drafted for the run by Chicago’s Democratic machine.

When you have a person like Barack Hussein Obama, who habitually hides his entire background, you cannot help but think there is some sinister reason behind it. We now know that Barry Soetoro//aka//Barack Hussein Obama publicly displayed on national television a forged Birth Certificate in April 2011. We now know he had a fake Selective Service Registration Card and has a Social Security Number previously issued in Connecticut to another person. We also know Obama was registered in school in Indonesia as a Muslim yet he claims he is a Christian for no other reason that he attended the radical racist Trinity United Church of Christ run by the equally racist, anti-American, Rev. Jeremiah Wright. And now there is even someone who suspects that Barack Hussein Obama was the son of a black Communist named Frank Marshall Davis and not Keyan-born Barack Obama. Sr., whose name appears on Barry’s fake birth certificate. As WND.com reported last month about a full-length documentary film scheduled for release in July titled: “Dreams from My Real Father: A Story of Reds and Deception,” made by Joel Gilbert. Read the “WND EXCLUSIVE: Film: President’s father not Barack Obama 2 years of research, rare photos support compelling case Published: 04/25/2012 at 8:51 PM”

Remember that problem that Joe Biden has with not being able to control what comes out of his mouth? Maybe it is an infectious disease and it’s very possible that Newsweek may have caught it.