By: Nelson Abdullah – Oldironsides
Conscience of a Conservative

Barack Hussein Obama has been distorting the facts in his own TV ads and with the complacent assistance of the leftist news media, no one has asked any questions. What more can be said of the biggest liar ever seen in American history. Maybe the news media has just gotten used to it but for the rest of us who haven’t had our memories dulled by too much reality television, the ads stink like a pile of crap. Funded by billions of dollars in campaign contributions pouring in from every pro-communist, pro-Muslim, America-hating leach, the campaign to reelect Obama has been bombarding us with distortions of the truth. One particular campaign ad has no dialog, just a moving scale of events that illustrates the collapse of our economy beginning in January 2008 and then showing the miraculous turnaround brought about by the Messiah/Muslim-in-Chief. 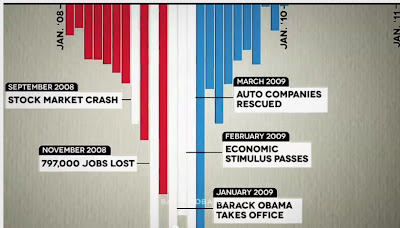 What is wrong with the ad is where it begins (it begins on the far left and isn’t that an appropriate play on words) and the lack of identifying labels to show what caused the collapse that is still being felt. In other words, who drove the truck off the cliff and when did they get behind the wheel.

Seemingly laying the groundwork for an invasion, no one appeared to notice that the news media’s concerted effort to make George W. Bush a very unpopular president during his second term, led to a Democratic Party majority getting swept into office during the elections of 2006 and 2008. Along with the Democratic Party majority came the new chairmanships of the various committees that write the vast array of government regulations that burden our lives in every way.

In the Democrat controlled Congress of 2008, two such important committees were the Senate Banking Committee under the leadership of Democrat Senator Chris Dodd and the House Financial Services Committee, led by Democrat Congressman Barney Frank. Together, these two Democrats passed rules and regulations that committed the Federal National Mortgage Association, commonly known as Fanny Mae, and the Federal Home Loan Mortgage Corporation, known as Freddie Mac, to obligate banks to make sub-prime housing loans to people who were judged to be unable to afford them. An article from the British newspaper, The Independent, tells the whole story.

The Independent, a British newspaper, blames the Democrats for the failure of Fannie Mae and Freddie Mac:

What is the proximate cause of the collapse of confidence in the world’s banks? Millions of improvident loans to American housebuyers. Which organisations were on their own responsible for guaranteeing half of this $12 trillion market? Freddie Mac and Fannie Mae, the so-called Government Sponsored Enterprises which last month were formally nationalised to prevent their immediate and catastrophic collapse. Now, who do you think were among the leading figures blocking all the earlier attempts by President Bush — and other Republicans — to bring these lending behemoths under greater regulatory control? Step forward, Barney Frank and Chris Dodd.

In September 2003 the Bush administration launched a measure to bring Fannie Mae and Freddie Mac under stricter regulatory control, after a report by outside investigators established that they were not adequately hedging against risks and that Fannie Mae in particular had scandalously mis-stated its accounts. In 2006, it was revealed that Fannie Mae had overstated its earnings — to which its senior executives’ bonuses were linked — by a stunning $9.3billion. Between 1998 and 2003, Fannie Mae’s executive chairman, Franklin Raines, picked up over $90m in bonuses and stock options.

Yet Barney Frank and his chums blocked all Bush’s attempts to put a rein on Raines. During the House Financial Services Committee hearing following Bush’s initiative, Frank declared: “The more people exaggerate a threat of safety and soundness [at Freddie Mac and Fannie Mae], the more people conjure up the possibility of serious financial losses to the Treasury which I do not see. I think we see entities that are fundamentally sound financially.” His colleague on the committee, the California Democrat Maxine Walters, said: “There were nearly a dozen hearings where we were trying to fix something that wasn’t broke. Mr Chairman, we do not have a crisis at Freddie Mac and particularly at Fannie Mae under the outstanding leadership of Mr Franklin Raines.”

When Mr Raines himself was challenged by the Republican Christopher Shays, to the effect that his ratio of capital to assets (that is, mortgages) of 3 per cent was dangerously low, the Fannie Mae boss retorted that “our assets are so riskless, we could have a capital ratio of under 2 per cent”.

The web site Politico reported this on October 9, 2008 in a story written by Patrick O’Connor & Amie Parnes:

“This comes as conservative talk radio hosts and an outside group aligned with the GOP accuse the duo of similar crimes against the economy, particularly an allegation that congressional Democrats blocked legislation to increase regulations and oversight for mortgage giants Fannie Mae and Freddie Mac.”

“The fact is that the same people that are now claiming credit for this rescue are the same ones that were willing co-conspirators in causing the problem,” McCain told supporters at a town hall meeting in Waukesha, Wis., on Thursday. “Congressman Barney Frank and Senator Chris Dodd are two of them.”

Nothing new there. The Democrats are STILL claiming credit for fixing the mess they caused six years ago. Did I misquote the years? No, because in 2006 the Democrats took control of both houses of Congress following a sweeping victory in the mid-term elections and they used their veto proof majority to ram through changes in the banking regulations to allow people who could not afford mortgages to get them, and hundreds of thousands did, and many more subsequently lost their homes in the foreclosure problem that brought down the banks. All the while Republican George W. Bush was catching the blame for what the Democrats had done. And for whom Democrat Barack Hussein Obama has been blaming for all our troubles for the last four years.

Which brings us up to date. So now, in Iowa, Democrat Barack Hussein Obama calls Mitt Romney’s words ‘A Cow Pie of Distortion’

“I know Gov. Romney came to Des Moines last week and warned about ‘a prairie fire of debt’,” Obama said Thursday evening. “But he left out some facts. His speech was more like a cow pie of distortion.”

Want to know what a real “cow pie of distortion” looks like? Take a good look at the latest TV commercial that Barack Hussein Obama has been passing around. That red graph following January 2008 at the start of the ad was all caused by the Democrats. 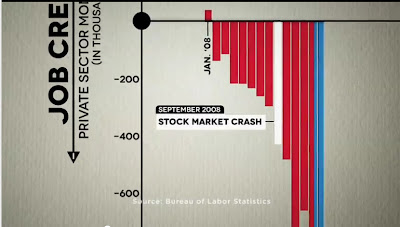 Barack Hussein Obama’s delusions of grandeur make him the biggest pile of cow poop in Washington. And Obama, along with the 88 Congressional members of the Democratic Socialists of America, are at the center of the problem. In plain language folks, Obama is a piece of shit and he and the rest of the Democrats in Washington should all be flushed down the toilet.

The two illustrations above came from a YouTube post “Published on May 10, 2012 by BarackObamadotcom” The post carries a subtext message that says: “Remember how things were? Do we really want to reverse course now?” Funny as to how I do remember how things were and how good they were before Barack Obama got into politics and YES, I do want to reverse course now. I also happen to know that the FORWARD message also being promoted as Obama’s campaign slogan was copied from a whole bunch of Communist propaganda.

On August 13, 2009, JB Williams of the Canada Free Press wrote the following:
“After decades of failed attempts to take over America via their third party initiatives that couldn’t break America’s two party system, leaders of both the Communist Party USA and Socialist Party USA chose a new strategy.

“Both being the ultimate ‘party of the working class stiff,’ they joined forces in a new venture that would work within the US two party system, by hijacking control of one of the two primary parties. As the Democrat Party had already spent years identifying itself as the “party of the working class,” engaging in socio-economic class warfare as its primary method for expanding its political power, it was ripe for the hijacking.

“Together, Communist Party and Socialist Party leaders established the Democratic Socialists of America, and they share a common ideology which is now the platform and mantra of today’s DNC – CPUSA.

2 thoughts on “Barack Hussein Obama’s delusions of grandeur. Does he actually believe his own lies?”