I sometimes wonder if six years in the Army Reserves counts the same as folks who got drafted and served full time for a couple of years. In the long run it probably doesn’t much matter; but then why does the question remain in the back of my mind?

I joined the Army Reserves while attending college at Sam Houston State University during the Vietnam War era. There had been a draft number drawing which pretty much made the odds of my being drafted nil; something close to the end of the list of possible candidates, so why did I voluntarily submit to military service?

My answer boiled down to a sense of community responsibility in spite of my not having any faith in our nation’s leadership. I saw the Vietnam conflict as contrary to common sense; it violated my sense of right and wrong. We had troops on the ground, but had no intention of “winning.” Young men were dying; for what, so we could look like we were against communism and oppression? No, I intended to serve my country; just not necessarily by going into a war zone I didn’t support. Shouldn’t that be important; dying for something you believe in? Buffalo Springfield had a tune that comes to mind, Stop, Hey What’s That Sound.

I think it’s time we stop, children
what’s that sound
everybody look what’s goin’ down

It’s time we stop,
hey what’s that sound
everybody look what’s goin’ down…”

I took off for boot camp in the middle of winter; Ft. Jackson, South Carolina was a cold and dreary place. I was sick from some kind of “upper respiratory infection” almost from the first day. We all had to wear some kind of silly jock strap looking mask over our faces at all times; probably how I caught whatever it was that got into my chest. The time passed slowly, my not seeing much in the Army that suited my personality didn’t help.

In spite of having a URI, my physical body was in excellent shape, having been involved in gymnastics at the university, so the rigors of the Army’s “PT” fell considerably short of my regular workouts. I got together with another fellow in for the short haul and worked out, a track man from some college in Florida. We noticed that we could score quite well on the PT test, enough to make our Drill Sgt consider placing bets with his peers in other squads. Our end of the deal was to win those bets by coming in first while the pay off was we’d get to ride instead of marching to wherever the squad was headed; that was a fairly good return since my feet and the army boots never were a good fit either. Let’s just say I didn’t have to do much marching while in the Army; life was good.

Somewhere in the middle of my short active duty stint was a two month stay at Ft. Gordon, Georgia for Military Police training. That turned out to be the best two months I ever invested as it opened a door back in Houston when I signed up to be a police officer. Maybe my service to the country was more along the lines of twenty years; fighting bad guys in a blue uniform or fatigues, not much difference. 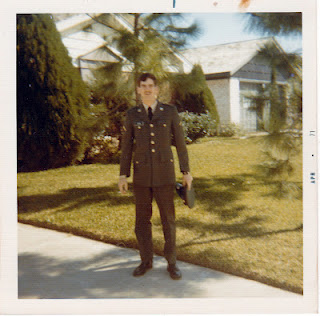 Here’s a snap shot my dad took in front of his house back in 1971; a lean mean fighting machine, all hundred and thirty eight pounds of me. I could eat all day long and never gain any weight back then. I had to gain two pounds to pass “belt line” for the Houston Police Department; now that was tough, eating banana splits just before going off to bed, a complete blueberry pie, extra pieces of chocolate cake and the list went on and on.

I stand proudly when the American Flag is displayed and can’t make it through singing America the Beautiful without my voice getting knotted up. Sometimes the tears begin flowing when I consider the wonderful message even before standing while other times I can make it all the way to the third stanza.

“…O beautiful for heroes proved
In liberating strife.
Who more than self their country loved
And mercy more than life!
America ! America!
May God thy gold refine
Till all success be nobleness
And every gain divine!…”

May we live our lives worthy of such sentiments; earn the blessings of liberty for which so many have sacrificed their lives, their fortunes and their sacred honor. These words should cause your chest to burn as you contemplate your heritage as an American citizen this Memorial Day.