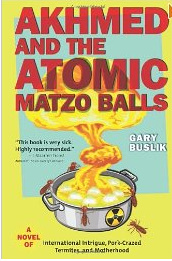 Gary Buslik has indeed written a book of international intrigue, pork-crazed termites and motherhood. After the insane politics of this week, I needed intense comic relief and this book was just the ticket. If you have a twisted sense of humor like I do, you will love this book! 🙂 It has been a long time since I have laughed like this – it’s the best since Hitchhiker’s Guide to the Galaxy. Still swiping at the tears…

Iranian president Akhmed teams up with the leaders of Venezuela and Cuba and their American intelligence agents to smuggle radioactive matzo balls into Miami Beach. But intelligence being as slippery a concept to these nincompoops as chicken fat on linoleum, when each member of the gang decides to ladle out his own personal nuke soup, holy terror Akhmed is left steaming. Will his plan to destroy America float like a fly or sink like a lead dumpling?

Star-crossed lovers, conniving academics, and blustery social climbers collide with ravenous termites, international do-badders, and multi-level marketing in a plot as fast-paced and hilarious as a runaway mountain bus. Radioactivity has never been so much fun.

If I could only write as well as he does. I think I have a crush on the guy. 8) This book is just incredible – the characters are insanely funny and the plot, well, you just have to read it. Want a look into the history of my new hero? Check it out:

When I finally got outed as a literature major, my poor mother cried for months, and my father would stride around the house ranting, “Big man! He knows the parts of speech!” After he kicked me out and disowned me, I lived in the airport for a while reciting Henry James for spare change [Ed: probably picking travelers’ pockets]. One day a veteran travel writer took pity on me and showed me how, by making hotel and restaurant owners naively believe I would write good reviews about them, they would give me free rooms, meals, and drinks [Ed: read “offed a travel writer and am using his documents and, of course, that Amex Platinum card”].

Daily, while I contemplate the exact date and time of Armageddon, I look for a sanity escape hatch and I think I have found it in this book. Evil is just that stupid. Truth in dark humor, he’s got it. I suspect Buslik is a spy – not sure for which side.

If you like mad dictators and camels, you’ll like this book. And you’ll have to imagine where that goes, won’t you? 🙂 Sex, violence, foul language – this book is a best seller. But the humor is what got me. And before you say, oh, NoisyRoom is just sick – I’m not alone. Two other Watcher’s Council members recommend the book. So, let me see… That’s two Jews and a Gentile – we’re covered!

This book is blogger approved and be forewarned – you will never be the same. Buy it before Iran really goes radioactive in three, two, one…

If you weren’t aware, students attending institutions of higher learning in the State of Texas have a portion of their tuition fees set aside in order to comply with federal student aid (FAFSA) requirements. This is enumerated under the Texas Education Code, Section 56.011, 56.012, 56.095 and 56.465 and applies to all students.

My daughter received her notification explaining how her $351.65 “donation” is helping provide money to some poor student via mandated wealth redistribution. I find that remarkable since my daughter had to take out a student loan in order to complete her senior year; the poorest among us are digging deeper into debt in order to finance an entitlement program; only in America!

This serves as a wake up call, “Welcome to the system,” as she is now taxed simply because the government can get away with it; gouged like roughly 50% of America’s responsible tax payers while letting the other 50% skate.

My daughter graduates this year, having completed the requirements of a “four year” Mechanical Engineering degree with its accompanied two and a half years of “co-ops” working at NASA and applying what she’d learned. She’s well prepared to jump into the deep end of the pool and be a full fledged tax payer with a long list of responsibilities. Paying for her own tuition and this “included” mandated expense, she can lay claim to having lent a helping hand to an illegal alien who gets attend our universities at a greatly reduced price. Don’t you know how proud and thrilled my daughter is to have helped a needy fellow student?

This reminds me of the fellow who lost a ten dollar bill and was physically sick about it. One of his friends tried to console him, “Just think, some needy person probably found it”. After hearing this, the fellow replied, “Yea, but I’m the needy person who needs to find ten dollars!”

Students are being asked, scratch that, students are forced to pay for their fellow student’s education while many of them are trying to keep their own heads above the water line; what does that say for the folks who wrote such a mandate? I’m proud of my daughter’s accomplishments and determination to achieve her goals. Let’s hope she makes enough as a mechanical engineer to support many more undeserving individuals, just like the rest of us.