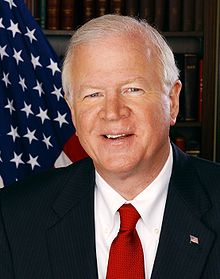 Well, praise be to Saxby – and to ABC. One is glad whenever one sees people of responsible position who are awake, aware, and applied of conscience. Lately, one is even surprised.

Forgive me my smirk and slightly shaking head at the thought of Eric “Black Panther” Holder, of Barack Obama and David Axelrod, of George Soros and the unionistas, of the complex, being confronted by such a matter.

“Leave him on hold, I’m dialing mis amigos con Sinaloa to see if they’d like to check out our latest M4’s, Brett. (Hm, I like this new admin – Hoosier boy, I hear.)”

A number of conservative bloggers allege they have been targeted through the use of harassment tactics such as SWAT-ting (fooling 911 operators into sending emergency teams to their homes), in retaliation for posts they have written, and now Sen. Saxby Chambliss, R-Ga., has stepped into the matter. He has sent a letter to Attorney General Eric Holder urging him to investigate the SWAT-ting cases to see if federal laws have been violated.

“I am writing with concern regarding recent reports that several members of the community of online political commentators have been targeted with harassing and frightening actions. Any potentially criminal action that incites fear, seeks to silence a dissenting opinion, and collaterally wastes the resources of law enforcement should be given close scrutiny at all levels,” Chambliss wrote in the letter.

“Regardless of any potential political differences that may exist, threats and intimidation have no place in our national political discourse. Those who choose to enter into that political discourse should not have to worry about potential threats to their or their family’s safety,” Chambliss continued. “While I am certain that local law enforcement is reviewing each of these instances, I am asking you to please look into each of these cases as well to determine if any federal laws may have been violated. Future targets of SWAT-ting, whether engaged in political speech or not, may not be so fortunate as to escape physical harm.”

ABC News spoke with two prominent conservative bloggers who were victims of SWAT-ting, a hoax tactic used by some hackers to infiltrate a victim’s phone system, often through voice over IP (VOIP) technology to make calls appear as if they are coming from a residence. The perpetrators call police to report a violent crime at that home to which the police respond, sometimes with SWAT teams.

To see (and hear) more about this: gulagbound.com/tag/swatting