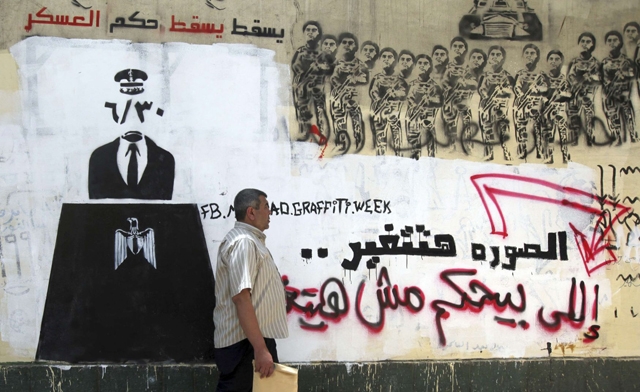 A wall sprayed with graffiti near Tahrir Square in downtown Cairo. Reuters

As reported in the Egyptian press last week, American senator and chairman of the Senate Foreign Relations Committee, John Kerry, asserted that Egypt’s recent parliamentary elections were conducted honestly and without fraud (masrawy.com, 5/25/12). Masrawy further recorded that Senator Kerry advised the Egyptian people to accept the results of the upcoming presidential election after the challenges of the past year. Without commenting on the current Muslim Brotherhood majority in Egypt’s Parliament, the Senator urged the next president of Egypt to stand up for the people and added that the U.S. Congress will deal with Egypt’s next Islamist president openly, fairly and without prejudice.

For those who fought for freedom and the overthrow of an oppressive authoritative regime, Senator John Kerry’s remarks, hailing from the beacon of freedom in the West, are devastating. What has passed so far as a democratic process in Egypt is not exactly what revolutionaries had in mind when 18 months ago pro-democracy liberty seekers took to the streets to bring down the tyranny of the Mubarak regime hoping to replace it — first by writing a new constitution and holding free elections – then with a new government by the people and for the people.

Now Islamists make up a majority in the Egyptian Parliament. Their presidential candidate, Mahmoud Morsi, is an Islamist. The opposition candidate, Ahmed Shafiq, is from the old regime, a military member and a Mubarak look-alike. Corrupted elections fraught with bribes – votes traded for oil, rice and potatoes — brought them about. All are advocates of Islamic Sharia law, a state religious system having nothing in common with democratic principles, now making the outcome for the people of Egypt a grim reality.

Regardless of what Western leaders have decided, the Egyptian people, who have shed their blood and risked their lives with the hope of fulfilling their dream of democracy, are not giving up their fight. Although politically inexperienced, freedom-fighters resolve to fight until death for basic human rights taken for granted in the West. The blogger’s words I quote below illustrate a fiercely tenacious spirit for a fight to the end in this current political landscape and one can only imagine how hasty and defeatist the words of Senator Kerry sound to him. He writes:

We are not obligated to choose between an Islamic supreme guide and the fallen regime. Since we believe in liberty, we are also aware that to obtain freedom, we pay with our lives. Our revolution has withstood both military beatings and lies from the Brotherhood. We insist on our freedom or to die. We will not accept a Khomeini in Egypt. We will not accept another dictator to shepherd us with a staff. After 18 months of sacrifices they are wrong to think that we will accept a parliament from the Stone Age or a dictator from the military or a supreme guide. In any case, we will not accept it, and our rejection will reach you through our river of blood.

He goes on to say that their bravery breaks with the tradition of their fathers’ cowardice. He writes:

We will do everything for our goal of freedom, and this time the future of our children will not be designed by the cowardice of our fathers. We are not like our fathers. We are not scared of military jails or long beards. We are against these elections, and we will boycott it, and we announce that we are not recognizing either candidate as a president. We reserve our right to choose a substitute. Either we have complete freedom or you will pay a high price if you can.

The next few weeks leading up to the Egyptian presidential election is like a fuse already lit. Let’s review how we got here. Remember when protesters took to the street en masse in a relatively peaceful unity of pro-democracy youths, Muslims and Christians together? They would not back down until Mubarak stepped down. The Muslim Brotherhood (MB) usurped their power, deceiving all about not wanting any political power.

Egypt’s military formed an interim council headed by Field Marshal Tantawi (a MB sympathizer) to keep the regime’s power in tact hoping to renew old political parties for an election win crafted to assure the continuance of the Mubarak regime. Egypt’s constitution was appropriately expunged. The military agreed with MB leaders that a new one would not be written. When the military realized the new political emergence of the MB, they struck a compromise with them to preserve their own unique privilege (a military state within the state), then entered a power struggle with them to take over the country. The freedom fighters paid a high price with their blood.

Banned from political life in Egypt since the early 1950s and still claiming not to seek power, the MB created political parties and ran candidates in the parliamentary elections. Their exploitation of the politically inexperienced Salafis, whose previous dealings in Egypt had always been manipulation behind the scenes and now whose parliamentary candidate in the race, Dr. Abu el Fotuh, former MB and head of the terrorist group, Al Gamaaha Al Islamiah (responsible for Sadat’s assassination), created a very scary voice for democracy seekers. This strategy made the MB appear moderate. It must be noted that Tantawi turned a blind eye to the corrupt practices of the MB before and during the parliamentary elections.

Currently, no longer in the limelight, Salafis remain on the sidelines to eventually join with the MB if they should lose the upcoming presidential election and, as a result, decide to instigate a rebellion against the victorious military represented by Shafiq, taking down freedom fighters in the process. Three weeks out from the June election, already the Muslim Brotherhood has openly stated that they do not accept a challenger in the presidential bid because they alone are entitled to the executive position based on their pursuit of the Caliphate. Consequently, the Shafiq headquarters in Cairo was recently attacked by MB protesters and burned (Al-Arabiya.net, 5/29/12).

Reading the handwriting on the wall, Senator Kerry has invited certain members of U.S. Congress to dialogue openly with the MB if and when they win the election. We can only hope that all monetary considerations from the American taxpayer to the Egyptian state will be contingent on regularly verifying that equality and human rights are being honored in this new democratic Egyptian state.

Ashraf Ramelah is the Egyptian-born founder and president of Voice of the Copts, a nonprofit human rights organization fighting the spread of Islamic supremacy, board member of Stop Islamization of Nations (SION).