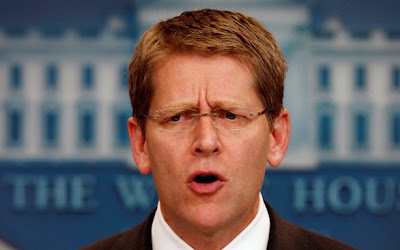 Minister of Disinformation Jay Carney and the rest of Barack Obama’s minions are running scared.

For the first time in a long time the national press called Obama out yesterday, for his “doing just fine” comment last week on the state of the private sector economy. (Except Juan Williams, who parroted Obama, his central processing unit showing its usual signs of damage.)

Carney’s response to the press: “you all ought to do your jobs and report on the context” of Obama’s gaffe.

I can simply refer you again to what the President talked about as he stood here before you in the context of his rather full discussion of the state of the economy, and the simple fact that in this recovery has seen 4.3 million jobs in the private sector created – it has also seen a situation where, because of massive layoffs of teachers, firefighters and police officers – a reduction in the public sector. And by public sector, we’re talking about state and local governments who have had to layoff teachers from classrooms, firefighters from the force and police officers from the force. That was the context of his comments which I think everyone in this room was aware of at the time.

I watched Obama’s “rather full discussion” of the state of economy, resisting the urge to commit seppuku. What I heard was lethargic script reading. He said nothing we didn’t already know. Obama was about as lively as a dead fish, except during the questioning period following his “rather full discussion”– in which he said, with his usual arrogance, that it was offensive for the GOP to accuse his administration of being the source of national security leaks. (Shockingly, it turns out the Obama machine probably is.)

In fact, Obama’s defiance in the face of questions about sensitive information leaks is exactly what Carney demonstrated yesterday. Carney’s blustering was symptomatic of the administration’s official policy in response to controversy: Bully, bully, bully.

Mitt Romney, meanwhile, doesn’t need the lapdog media. He’s already overcome an anti-saccharine, trumped-up WaPo story about his so-called bullying youth and the administration’s fiasco in using the lapdog media to denigrate Romney’s tenure at Bain Capital, which didn’t turn out to be 1/10th as bad as Obama 2012 and the media claimed it was. (Always remember, the lapdog media will tell you one or two “bad” facts but leave out 10 other positive facts, in order to advance the left’s narrative.) Romney, in fact, has us, the legion of electronic conservative pundits and activists and everyday citizens who’ve had enough of the socialist nightmare freight train we’re on. Obama has Media Matters, [email protected], Mother Jones, and a host of other energized but failing online rejects who couldn’t hold a candle to us if we gave them all the wax and wicks in this country.

And we’ve vetted Romney. We excoriated him during the brutal Republican primaries. We’ve been harder on him than a rattlesnake treats its prey. I’d wager that, if Romney wins, his administration is going to pay a lot more attention to what the online community and the American people as a whole are telling him about the state of the country than Obama did, probably because he won’t be breaking any presidential golfing or fundraising records. He’ll be too busy cleaning up after the Demorrhoid in Chief.

The lapdog media isn’t going to win any fans. They’re not going to do 1/32nd of the job that we will. They’ve become a de facto arm of the government, and, when leftists are in charge, as long as the president isn’t sleeping with interns, they’ve been content to massage press releases and bland statements from the Whitehouse and pass them off as their own insights.

If the lapdog media is waking up, if they’re becoming aware, if they’re finally starting to question this administration, Obama might as well just pack up and quit now, while he’s behind.

UPDATE: Thanks to MOTUS for the linkage.

Former Florida Governor Jeb Bush struck a nerve today when he claimed that both Reagan and his father George H.W. Bush would have a difficult time in today’s quote ‘orthodox’ GOP. The former governor went on to express his frustration with the party, which he criticized as being overly partisan.

Glenn Beck used his Monday evening broadcast to expose the four key ways in which the Federal Reserve is a “scam,” namely because:

Beck believes that the Federal Reserve and the Treasury are doing something “you and I couldn’t get away with,” and that’s “writing bad checks.”