We had to remove the last two posts because they were crashing the site. We are working on resolving the issue. Sorry about that. 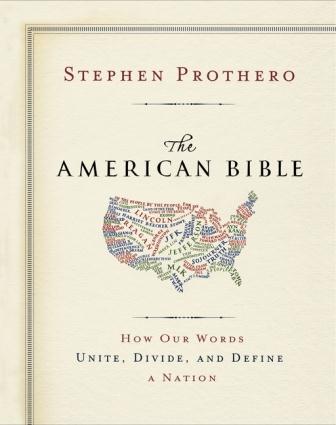 Already this election season is one of the most brutal on record that I can remember. One thing is for sure, there will never be a true meeting of the minds between Constitutional Conservatives and Progressives. No way, no how.

In Steven Prothero’s new book: The American Bible – How Our Words Unite, Divide, And Define A Nation, he makes that point eloquently. America is not a country of conformists or at least, it shouldn’t be. We are mavericks and our discourse is impassioned and heated at times. This is the true American spirit of debate. It should not be about parties and partisan politics, but ideals: right and wrong, good and evil.

Prothero puts forth that we thrive as Americans when we argue in a vigorous, but civil way about the core ideas we share. You do not win hearts, souls and minds by fire and brimstone preaching but by reasoned debate. We learn and come to conclusions by sparring over ideals and premises and by reaching those sought for conclusions through a series of logical battles. His book covers the writings and teachings of our founding fathers and leaders composing The American Bible of our core beliefs. It’s an incredible piece of workmanship and a stunning book. If you care to learn about American values, this is THE book for you – an absolute must have and should be on every Conservative’s bookshelf. In it you will find American scripture so-to-speak: the hallowed documents of our country’s history, speeches, literature, song and letters. Prothero looks at the words that make up these items that form the beating heart of the greatest nation on earth. He brings civil debate back into the political discourse of our time and shows the true depth of the American spirit.

The book is organized as a bible would be and it is a brilliant collaboration of all that is comprised in the lineage of the ‘shining city on the hill.’

Not all of the above names are heroes of mine, but I choose to take the good and the worthy from them and adhere to the best of what those who came before put forth. That is survival – that is the American lesson. You can voice dissent with our leaders of the past or heatedly espouse with conviction the ideals that they stood for. But one thing we must do is learn from our history – study it and pass it on. Because if we don’t learn from it, we are doomed to repeat the mistakes others have thrust upon us generation to generation. That leads to slavery and death, not freedom and enlightenment.

From The American Bible:

WORDS MATTER. They move individuals to tears and to action. They make or break communities. In Israel and the Palestinian territories, India and Pakistan, Great Britain and the United States, words tie people together and tear them apart. Socrates lives because of Plato’s dialogues. The world remembers Jesus because of the words of Matthew, Mark, Luke and John. And what Americans recall of Paul Revere we owe to the poetry of Henry Wadsworth Longfellow.

In his Gettysburg Address, probably the greatest American speech ever, President Lincoln said, “The world will little note nor long remember what we say here, but it can never forget what they did here.” He was wrong. Americans have largely forgotten what Union and Confederate soldiers did at Gettysburg during three bloody days in July 1863, but we have not forgotten Lincoln’s words, which continue to be quoted and misquoted, interpreted and misinterpreted for all sorts of purposes. In the few minutes Lincoln spoke at Gettysburg, he explained why the Civil War was being waged, why the Union was worth preserving, and why the United States was founded. His words—“conceived in liberty … dedicated to the proposition that all men are created equal … a new birth of freedom”—are now part of our lexicon. They live not because Americans agree with everything Lincoln said, but because they agree that everything he said is worth debating. What does it mean to affirm “government of the people, by the people, for the people”? It depends on whom you ask. And if you ask enough Americans you will see that the nation rests not on agreement about its core ideas and values, but on a willingness to continue to debate them. …

Americans agree to a surprising degree about which symbols and ideas are central to our national life, but we disagree profoundly about what these symbols and ideas mean and how they ought to be translated into public policies. …

The American Bible is a record of this ongoing conversation. It presents the books held sacred by the American people—the core texts to which Americans are forever returning as they reflect on what it means to be an American. … The American Bible also includes commentaries on these core texts—interpretations that keep America’s scriptures vibrant by applying their time-tested truths to contemporary circumstances.

The book is a treasure and I firmly believe that it is a text you should give your children and grandchildren. It contains something more precious than gold – our heritage of freedom and independence. It is what sets us apart from Europe and other countries. Our individualism and the strength of character to debate and disagree with one another, but allow others to have their own ideas, beliefs and convictions is what truly sets Americans apart. The American Bible as written by Stephen Prothero is truly the American legacy.

Most everyone would agree that June has gotten off to a bumpy start for President Barack Obama, who has seen a dozen high profile surrogates side with Team Romney against his negative Bain Capital attack ads, countless classified covert operation detail leaks from inside the White House, Attorney General Eric Holder about to be hung by Congress, and finally, the brutal backlash from his straight-faced “the private sector is fine” statement.

And it’s just getting worse, day by day.

Now, a group that was founded by longtime Democratic strategist James Carville and pollster Stanley Greenberg, called Democracy Corps, released a memo this past Monday, which was based on the analysis of results from focus group sessions held with residents of two important battleground states: Ohio and Pennsylvania, according to a NewsCore article yesterday.

The high highlights from the memo read…

“What is clear from this fresh look at [the] public consciousness [regarding] the economy, is how difficult this period [prolonged recession with high unemployment] has been for both non-college-educated and college-educated voters–and how vulnerable the prevailing narratives articulated by national Democratic leaders are.

We will face an impossible headwind in November if we do not move to [fabricate] a new narrative … that contextualizes the recovery but, more importantly, focuses on what we [Obama] will do to make a better future for the middle class.”

Then, Ed Henry’s FOXNews article today supplied an even more critical set of passages from the same memo, which reads…

“It is [Democrat] elites who are creating a conventional wisdom that an incumbent president must run on his economic performance–and therefore must convince voters that things are moving in the right direction.

They are wrong, and that will fail.

The voters are very sophisticated about the character of the economy; they know who is mainly responsible for what went wrong and they are hungry to hear the President talk about the future.

They know we are in a new normal, where life is a struggle–and convincing them that things are good enough for those who have found jobs is a fool’s errand.

They want to know the [President’s] plans for making things better in a serious way–not just focused on finishing up the work of the recovery.”

Basically, Carville’s memo says that the facts regarding the continuingly terrible state of the U.S. economy during President Barack Obama’s first-term as president, have erected an impenetrable wall between him and his reelection in November, and he succumb to “it’s about the economy stupid,” the exact same reason that President George H.W. Bush lost against President Bill Clinton in 1992.

And ironically, James Carville should know, as he was largely responsible for orchestrating Bill Clinton’s victory that year–followed by his reelection four years later.

So, what did Barack Obama say during a fundraiser at the Franklin Institute in Philadelphia on Tuesday night–before attending an amazing six fundraisers in a row?

“They’re [voters] not following … the ups and downs, the ins and outs of this [presidential] campaign.

But they do have a sense of what’s true.

They have pretty good instincts about what works and they’re not persuaded that an economy built on the notion that everybody here is on their own is somehow going to result in a stronger, more prosperous America.

So our job is to just make sure that we get that message out.”

Maybe that is why Gov. Mitt Romney remarked…

“He’s had a number of very revealing comments that show just how far out of touch he is with what’s happening in the country.

The president has the most anti-business, anti-investment, anti- jobs administration I think I’ve ever seen. And the people in this country want to see people who have private sector experience who know what it takes to get the private sector hiring again.”

It appears as though Barack Obama will maintain his collision course toward November, playing right into the hands of Mitt Romney, who will continue his course of hammering him on the horrible economy, including this morning in Washington, D.C., while speaking to the Business Roundtable, which is a group of CEOs from top American companies–before heading to Ohio later for a [single] fundraiser.

Finally, remember the voters who are supposedly “not following this campaign?”

Well, they are actually not following the president, by greater numbers each day, as Rasmussen’s “Daily Presidential Tracking Poll” reveals that Romney has increased his lead over Obama 48 to 44 percent–outside the margin of error.

Look at these elitist jackasses as they lounge and text and laugh as Europe burns to the ground. Remind you of anyone?