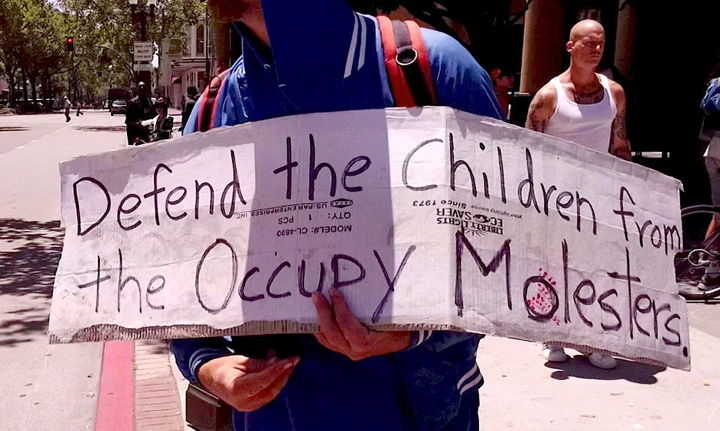 Just. Pure. Freaking. Evil. On June 13th, Occupiers in Oakland came out to protest against a conference dedicated to combatting child sex trafficking. That’s right… They were in favor of child sex trafficking and all the pedophiles who exploit these innocent children. These people are unconscionable monsters. 99% my ass.

Zombie has a new post up at the PJ Tatler: Occupy Oakland protests in FAVOR of child sex trafficking. Usually I make fun of these whackos, but this time I’m not – this time I want you to see just how sick they are. Go read Zombie’s piece and pass it on. There is good and there is evil and if you ever doubted what side the Occupy Movement is on, doubt no more.

Check out for yourself what these people are like and why I believe they should ‘collectively’ rot in hell. From Zombie:

Hell, why am I even bothering with this? When you act as the Occupiers did at this protest, your violent aggressive behavior trumps any message you may have had. After protesting on the sidewalk for a while, the Occupiers went berserk and staged a full-frontal assault on the conference. The security guards somehow managed to repel the invasion, as the Occupiers then hurled paint-bombs, bottles of unknown liquid, eggs and other projectiles at the hotel. Amazingly, they were so proud of all this that they uploaded their own video of the assault:

The Occupiers hide behind their message of police hate to push the most vile of agendas. It’s not just that many of them are the great unwashed, they are filthy inside as well. There is no defense of those who support child sex trafficking. Sexual abuse, violence, enforced prostitution, pedophilia, slavery – anything evil goes. There was one – count him, one – protestor in Oakland standing against these monsters. Bless his soul – that’s courage. Lord spare us for one decent man.

So they keep up their ‘eat the rich’ mantra and ‘kill the pigs’ motto, while condoning the most heinous acts against children. Oh, and Anonymous was there in the mix as well.

Please go to Zombie’s piece, read it all and see the pics and the links there that go deeper into this. It actually makes me ill and makes me wish that God would sweep these evil asshats from the face of the earth.

Last Friday afternoon, President Barack Obama took to the podium in the White House Rose Garden, where he announced his implementation of a de facto “Dream Act,” that would “protect” 800,000 to 2 million illegal immigrants from deportation and, more importantly, grant them work permits–making them part of an already strained USA labor force.

The Executive Order signed by the president, circumvents Congress, by utilizing “prosecutorial discretion” to direct Homeland Security and ICE to remove all illegal immigrants from deportation lists– if they were brought to the USA before age 16, but are now still younger than 30, and have been in the country for at least five consecutive years. They must also either be in school or have a GED or high school diploma, no criminal history or have served in the military, according to Mary Bryce’s ABC News article today.

This political end run around Congress has the same selfish carbon copy campaign objective as Team Obama’s recent series of de facto “declassifications” of military and covert operation details to the media–to benefit the president’s reelection campaign bid in November.

The new rule “gives Latinos an added reason not only to support the president, but to actually turn out and vote,” said Brent Wilkes, the national executive director of the League of United Latin American Citizens. Obama’s campaign hopes this move will encourage Latinos—who have the lowest voter registration numbers of any major ethnic group in the United States, despite their growing demographic—to register and show up at the voting booth [and vote for him], according to Liz Goodwin’s Yahoo News article today.

But, it may not be as simple as Team Obama had hoped.

Nelly Medina, a 62-year-old Miami resident who canvasses new voters as a volunteer for the National Council of La Raza, says that hasn’t been easy. “The people don’t want to vote,” she says in Spanish. “There’s a lot of apathy.”

For every 1,000 new voters registered over the past few months, there’s a handful who say they’re not interested according to Medina.

Clarissa Martinez, La Raza’s director of civic engagement, has cut their national goal of registering 180,000 new Latino voters by half, to just 90,000; and in Florida their efforts were slowed considerably by a new [anti-tampering] law requiring registration forms to be turned in within 48 hours of being completed.

Another likely unintended consequence of adding this many illegals to the labor force will be the “poaching” of low to no skill jobs from [citizens] in the black community, who are already suffering from a stagnant 13 percent unemployment rate, which Rep. Allen West (R-FL) says is “… the most important statistic in the African American community,” according to his interview in Chris Good’s May 10, 2012 ABC News article.

This second sucker punch to them from Barack Obama in as many months, would rub salt into the still fresh wound of him declaring his support of same-sex marriage, which is diametrically opposed to their Evangelical Christian values.

In fact, the March 2012 ABC News poll included in the article found that African Americans oppose gay marriage 55 to 41 percent–while all poll respondents support it 52 to 43 percent.

Exit polls in the 2008 California election confirm this, as while 94 percent of black voters supported Obama–fully 70 percent also supported the Proposition 8 ban on gay marriage.

The conversations have already been underway and it doesn’t sound good for Barack Obama.

Rev. Dr. Emmett Burns, insists that although his peregrines won’t support Gov. Romney, like he, they have no interest in going to the polls this year, according to Frances Martel’s May 14, 2012 Mediaite article.

“People have come up to me [and] are saying they don’t support this; they don’t like this,” he argued. “They are disappointed with the President, and they plan to stay home.”

Marvin Randolph, Senior Vice President of Campaigns for the NAACP, also acknowledged that these [negative] attitudes from religious leaders in the black community could lead to a serious suppression of the African American vote this time around.

Figures show that just a 2 percent decline in this voter base, which represents 13 percent of the total electorate, would lock President Barack H. Obama out of the White House in November 2012.