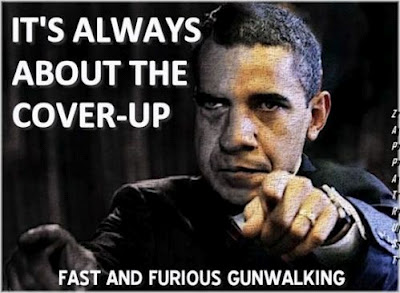 By now, you probably know that President Barack Obama invoked executive privilege to stall Congress’ attempt to get Attorney General Eric Holder to fork over documents in the Fast and Furious Scandal.

You probably also know, by now, that Obama explicitly spoke out against executive privilege before he was president, saying “the American people need to know what’s going on,” in yet another classic “do as I say, not as I do” moment brought to you by the first dictator in the history of the United States.

But did you know the president has to be involved in a situation in order to invoke executive privilege?

From the files of Congress:

Under those precedents, the privilege, which is constitutionally rooted, could be invoked by the President when asked to produce documents or other materials or information that reflect presidential decisionmaking and deliberations that he believes should remain confidential.

Note the emphasized language, and the grammar of the sentence that leaves no doubt that the president MUST be involved in whatever issue for which he invokes executive privilege: “when asked to produce documents or other materials or information that reflect PRESIDENTIAL DECISIONMAKING AND DELIBERATIONS.

You won’t hear this from the lapdog media. But, hey, I’m just a blogger.

So, what we have here, then, is the president not only protecting Holder, he’s also protecting himself.

Meanwhile, over at Think Regress (see comments), the left is rejoicing about the president’s actions, once again, as leftists do, defending the indefensible.

I wonder how the president’s new 800,000 voters feel about him covering up information about the murder of Mexicans.

UPDATE: Not only is the president apparently involved in F&F, he’s illegitimately using executive privilege to shield wrong doing.

UPDATE II: Breitbart is saying this is deliberative process privilege, rooted in common law not the Constitution, and therefore Obama didn’t invoke EP to protect himself.

UPDATE III: But Judge Napolitano says the implication the president is involved is in his actions of claiming executive privilege. H/T: YouViewed