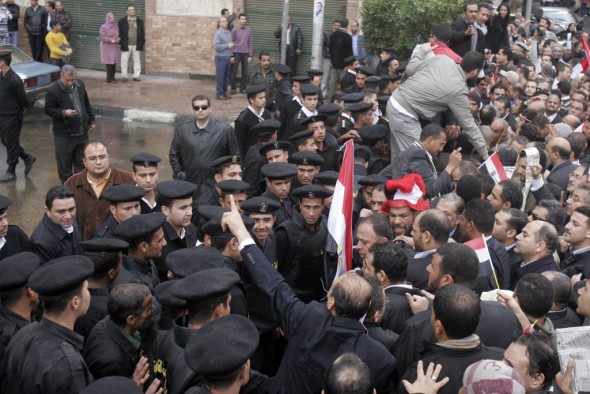 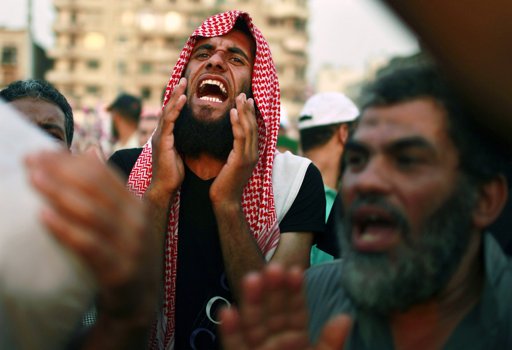 Turns out that reports by the mainstream media of the Muslim Brotherhood being ‘mostly secular’ and basically harmless, were somewhat off the mark. They were only ‘mostly dead.’ The Muslim Brotherhood’s Mohammed Mursi was named the winner of the Egyptian election for President this morning.

Mursi received up to 13.2 million votes out of just over 26 million, giving him approximately 51% of the vote. The other candidate, Ahmed Shafiq, the final Prime Minister under Hosni Mubarak, received 12.3 million votes. More than 800,000 ballots were invalidated. 95% of Egyptian Muslims in the United States voted for the Muslim Brotherhood. This also leaves the fate of about 12 million Coptic Christians in serious doubt. By Islmaic law, they can convert, pay the Jizya tax or die.

Upon winning, Mursi claimed that very little would change, except of course for the better. So, I guess that explains why, he has claimed “Our Capital ‘Shall Be Jerusalem, Allah Willing’.” Sounds like a threat of war to me.

And from Allen West:

A year ago there were those of us who warned the Obama Administration of a Muslim Brotherhood takeover in Egypt. We were castigated as alarmists and loose cannons. Today our predictions have come to reality and the ominous specter reminding us of the Iranian revolution is evident. The Muslim Brotherhood claimed they would not run a presidential candidate. Clearly the Arab Spring is nothing more than a radical Islamic nightmare. Now we need to unequivocally reiterate our support to the Coptic Christians and Israel. What an incredible foreign policy faux pas by the second coming of President Jimmy Carter, the Obama Administration. I call upon President Barack Obama to cut off American foreign aid to Egypt, denounce the results of this election, repudiate the Muslim Brotherhood, and all radical Islamist political entities.

Sadly, West should not hold his breath on Obama and his administration’s support. After all, Obama’s administration was so ‘worried’ that they instructed Egypt’s military to cede power to The Muslim Brotherhood:

The Obama administration warned Egypt’s military leaders on Monday to speedily hand over power or risk losing billions of dollars in U.S. military and economic aid to the country.

As Egypt’s Islamist candidate claimed victory in a presidential run-off, Pentagon and State Department officials expressed concern with a last-minute decree by Egypt’s ruling military council giving itself sweeping authority to maintain its grip on power and subordinate the nominal head of state. The move followed last week’s dissolution of parliament by an Egyptian court.

So, keeping faith with his Muslim roots, Obama utilized coercion bordering on extortion to ensure the handover of Egypt’s reins to The Muslim Brotherhood, taking the next step in a transition to a worldwide Caliphate and further down the road to a new dark ages, forcing Dhimmis to their subjective knees. From 1389 Blog:

And with this win and the ensuing celebrations of Muslims in Egypt and worldwide, there will certainly be changes. The Islamic police will almost certainly crack down on ‘violations’ of their faith and the iron fist of Shariah will descend everywhere. Take for instance an Egyptian man, who brutally beat his pregnant wife to death for not voting for Mursi and the Muslim Brotherhood. Change to die for.

This is not an Arab Spring, this is an Islamic winter in hell. Don’t pooh-pooh this and say, well, it’s just Egypt. No my friends, you are witnessing the escalation of World War III and Israel is ground zero. Tens of thousands are joyously dancing in Egypt’s streets, shouting ‘God is great!’ But these are the same violent, radical Jihadists who also said that should they come to power, they would wipe Israel from the face of the earth. A dark and vengeful God demands they do so and the world is in deep denial. Mursi is not only part of the Muslim Brotherhood, he has connections to Hamas and al Qaeda. Our White House evidently now has a revolving account for the Brotherhood so they can stay and schmooze with Obama. Birds of an Islamic feather.

Mursi will institute full Islamic law. 84% believe that heretics should be put to death, 82% believe that adulterers should be stoned and 77% believe that thieves should have their hands cut off. The barbarians have stormed the gates of the Middle East and are now ushering in their dream of a risen worldwide brutal Caliphate in the bloody name of Allah. The only thing worse that could happen, is if Egypt aligns with Iran. Oh, wait, the new regime is already aligned with Iran. They love death, we love Pepsi… Death is winning and the Egyptian Zombie Apocalypse is begun.

Most Western policy makers work on the false assumption that Russia and China are competing states with separate interests.

In reality, Russia and China are political, economic and military allies, united by their Leninist creed and a hatred of the West, and America in particular. He Guoqiang and Ivan Melnikov, deputy speaker of the State Duma from the Russian Communist Party.

From the Communist Party of China, international Department Website:

Russia, June 20 — Visiting senior leader of the Communist Party of China (CPC) He Guoqiang on Wednesday arrived in St. Petersburg, Russia’s second largest city, where he met with Vyacheslav Makarov, chairman of the legislative assembly of the city, on regional cooperation between the two countries.

On Tuesday, He met in Moscow leaders of major Russia political parties on strengthening inter-party cooperation.

When meeting with Lyudmila Shvetsova, deputy speaker of the State Duma from the United Russia party, He said China is willing to make joint efforts with Russia in promoting bilateral ties.

“The United Russia party, as the most significant political power in Russia, has played an important role in maintaining the stability in the country, developing economy, improving people’s living standard, among others,” said He, a member of the Standing Committee of the CPC Central Committee Political Bureau.

China attaches great importance to exchanges and cooperation with the ruling United Russia party, He said, adding that recent years have witnessed fruitful achievements in the relations between the CPC and the United Russia, as a multi-level exchange mechanism has been established.

“China will further its ties with the United Russia, sharing experiences in governance and exploring a development path in line with the national conditions of the two countries to promote economy while improving people’s living standard,” he said.

Shvetsova said cooperation between Russia and China, as strategic partners, in the Asia Pacific and international affairs has been very close in the past years, playing an important role to peace in the region and the world. United Russia would like to further exchanges with the CPC to promote bilateral relations.

He Guoqiang also held talks with Ivan Melnikov, deputy speaker of the State Duma from the Communist Party.

The West is not facing two different opponents, but one united foe.