No, you corrupt asshole. We want to know what you are hiding and stop you from further destruction.

The most widely anticipated United States Supreme Court ruling in recent history, on the constitutionality of “Obamacare,” was released this morning shortly after 10:00 a.m., substantially upholding the 2,700 page sweeping legislation in its 200 page opinion, the length of which is, in itself ironic, quite telling.

Surprisingly, the 5-4 decision–mostly along political lines–revealed that Chief Justice John Roberts, appointed by President George W. Bush, joined the left-leaning members of the court in the majority decision; particularly regarding the so-called “individual mandate,” which requires most Americans to purchase health insurance beginning in 2014, according to a FOXNews article today.

However, in stretching to uphold the individual mandate–the court had to define it as a “tax,” versus a “penalty” or “fine,” as it was written and sold to Congress and the American people by President Barack Obama.

Justice Robert’s, in writing the majority opinion, clarified by stating…

The individual mandate cannot be upheld as an exercise of Congress’s power under the Commerce Clause … In this case, however, it is reasonable to construe what Congress has done as increasing taxes on those who have a certain amount of income, but choose to go without health insurance. Such legislation is within Congress’s power to tax.

In an attempt to balance the majority opinion, Roberts stressed that the decision does not speak to the merits of the law, stating … “We [did] not consider whether the act embodies sound policies. That judgment is entrusted to the nation’s elected leaders.”

As expected, most Democrats are claiming victory for the president.

Mr. President, I’m happy. I’m pleased to see the Supreme Court put the law ahead of partisanship and ruled that the affordable care act is constitutional. Mr President, it’s a long opinion and we know that when we come back here after the elections there may be something we need to improve the law and we’ll do that working together.

This decision is a victory for the American people. With this ruling … We ensured health care would be a right for all, not a privilege for the few. Today, the Supreme Court affirmed our progress and protected that right, securing a future of health and economic security for the middle class and for every American.

Rep. Charlie Rangel (D-NY) intoned that the ruling … “gives us the opportunity to re-sell the bill, which we did not do before.”

Although he still missed the strategic bullseye in the matter, Rangel got nearest to realizing that the ruling was, in reality, an inescapable political death knell for Barack Obama and the entire Democrat party responsible for passing Obamacare–without a single Republican vote in either chamber.

Now that Obamacare is a functional reality, with 59 of 92 components already implemented, including the continued hiring 6,000 new IRS agents for collection of this new tax, as the law incorporates definitional “means-testing,” as a practical matter they will only be targeting Americans who actually pay federal income tax–beginning in 2014–who will subsidize the other half who will get healthcare free of charge.

Why is this a real problem for Obama and Democrats?

The smaller of the two major problems is that, as Rangel pointed out, Democrats are going to have to try to “re-sell” Obamacare to America–but this time as a “tax,” the largest single tax increase in American history.

Regardless of the expected financial push-back, it won’t work because [mainstream] media digital files are brimming with video of President Obama vehemently, arrogantly and demeaningly denying that the “fine” was a tax–in order to sell Obamacare in the first place.

GS: “…during the campaign. Under this mandate, the government is forcing people to spend money, fining you if you don’t. How is that not a tax?”

BO: “No. That’s not true, George. The – for us to say that you’ve got to take a responsibility to get health insurance is absolutely not a tax increase … No, but – but, George, you – you can’t just make up that language and decide that that’s called a tax increase.”

GS: “I – I don’t think I’m making it up. Merriam Webster’s Dictionary: Tax – “a charge, usually of money, imposed by authority on persons or property for public purposes.”

BO: “George, the fact that you looked up Merriam’s Dictionary, the definition of tax increase, indicates to me that you’re stretching a little bit right now … My critics say everything is a tax increase.”

GS: “But you reject that it’s a tax increase?”

BO: “I absolutely reject that notion.”

Not surprisingly, during Bush’s 1992 reelection campaign Gov. Bill Clinton beat him mercilessly in the media with his failure to keep this promise, and ultimately took over the Oval Office.

And candidate Romney, the GOP and the Super PACs supporting them, have enough money to make certain that every man, woman and child in America will see and hear Obama’s declaration repeatedly, before election day–as well as in the two debates scheduled.

Regardless, the “kill shot” that will foil Barack Obama’s 2012 reelection effort–if the economic and jobs situation weren’t enough already–is the fact that just a week after President Obama’s health care law was passed, 54% of “Likely Voters” nationwide wanted to see the law repealed, according to Rasmussen Reports article today.

As of this morning the numbers remained unchanged, as 54% still want to see the law repealed; polls conducted weekly or biweekly over the two years since the law’s passage in March 2010, clearly show the numbers have barely moved.

The the political dynamics have remained the same throughout as well, with most Democrats opposing repeal, while most Republicans and Independent voters wanting it repealed.

Older voters, who use the health care system more than anyone else, favor repeal more than younger voters.

As all polls have consistently shown 60% to 70% of voters believe the economy and stagnantly high unemployment are the primary issues for this election cycle, Speaker of the House John Boehner (R-OH) foretells the true impact of it in his response today…

The president’s health care law is hurting our economy by driving up health costs and making it harder for small businesses to hire. Today’s ruling underscores the urgency of repealing this harmful law in its entirety.

Even Obama’s Congressional Budget Office (CBO) agrees, in a March report, that implementing Obamacare would be a disaster, estimating that 20 million private sector employees will likely lose their employer group healthcare coverage. This is because their employers would rather “opt out” by paying a small “tax” [f.k.a. a “fine”] under Obamacare, than cover the much higher annual cost of coverage, therefore forcing employees to obtain their own coverage and pay 100% of the premiums for it.

There is no doubt that this would be financially ruinous for most American families affected, and especially for those who would ultimately lose their jobs from further rounds of job “off-shoring” because of these healthcare cost escalations.

So it obviously comes down to this…

Gov. Mitt Romney is the only candidate promising to repeal Obamacare if elected, therefore it would seem that he will now probably capture the support [and votes] of the 54% of “Likely Voters” who have maintained their unwavering anti-Obamacare stance since it was passed.

And, as a bonus, much like the GOP rout of 85 Congressional Democrats in the November 2010 mid-term elections, because of their part in passing Obamacare, it would appear there is another shellacking 18 weeks away–just in the nick of time. 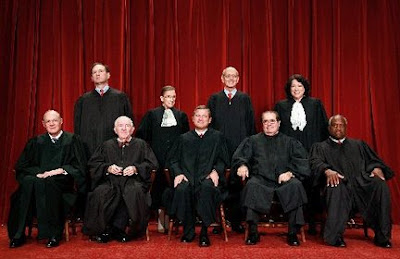 THESE 9 PEOPLE JUST TOLD YOU TO TAKE YOUR MEDICINE

This is no longer America. You no longer have the opportunity for the American Dream. You, we, me — we’re all slaves now. The Supreme Court of the United States of America has just made it official.

I had hopes, coming into today, that SCOTUS would uphold the rule of law, that the President of the United States and his Congresscriminal henchmen (and women) would not be allowed to rule you like king and court. I had hopes that the possibility of the American Dream, though tarnished and bloated by a monolith of ineffectual and overtly socialist federal government (from BOTH parties), could be reclaimed in November.

I no longer have any such hope. Barack Obama swept into office in 2008 with a promise of hope and change, but in reality he’s fundamentally changed America — JUST AS HE SAID HE WOULD — and that “change” is to effectively dash all hope for any kind of future whatsoever. He will do whatever he must to win in November. The Supreme Court just gave him the most significant boost of his presidency. Even the Stock Market fears the dream is over, tumbling after the SCOTUS decision was announced.

From the SCOTUSblog, while 866,000 people watched the live blog, the ruling came down:

But dissenting opinons don’t help you hold onto your freedom. There is no room in this country for freedom anymore. None whatsoever. (The actual majority opinion is here.)

William Jacobson over at Legal Insurrection says we need to fight back at the voting booth.

I recently said the same:

In these spend times we are nearing end times. The center cannot hold. It’s already beyond being off axis.

Choosing Mitt Romney over Barack Obama is infinitely more palatable than continuing on this path of destruction we follow. We have great sacrifices to make. We will have to retire later than we planned. We will have to expect less government entitlements than we were “promised” when we were forced to give the government our money to fund them. Then more money. And still more money. (Hell, every year we vote to tax ourselves locally for infrastructure projects many of us never see come to life, because often that money is diverted to other expenditures, just like the entitlement taxes we pay.) We will have to make the biggest gut check of our lives. We will have to hold the limbs of the people we elect to take over this monstrosity to more than just a fire; we will have to tie them to a rack and torture them, if necessary, to right this sinking ship.

I’ve been hearing “let’s go to the voting booth and take back this country” all of my adult life. Like many of you, I’ve voted my conscience, or at least on what I thought was in the best interest of this country to keep it somewhere within the framework of a Constitutional Republic, however ridiculous and misguided an exercise that was.

The fact is, we’ve allowed 100 Senators, 435 Congressmen, one President, and nine Supreme Court justices — 545 human beings out of the 300 million who are directly, legally, morally, and individually responsible for the domestic problems that plague this country — to cajole us, to patronize us, to lie to us, to horrify us, to control us from their sick little pulpits in the District of Criminals.

It’s time we stop letting them.

What are you going to do about it?

I know what I’m going to do: Tear the monolith down by whatever means necessary.