A friend sent a collection of old photographs, a turn of the century history lesson of how folks of a different era managed to muddle through life. There were pictures of horse drawn carriages with the driver being pelted by a hard rain sitting atop his perch while his customers were protected inside the cab, folks huddled under a tarp fashioned into a makeshift home on the side of the road indicating hard times and vendors hawking their wares in the public square.

One photograph caught my interest, a locksmith in London from 1890 crafting a key in the public square; imagine that, locksmiths made keys back then. In a few years that might be an odd thought, locksmiths make keys. 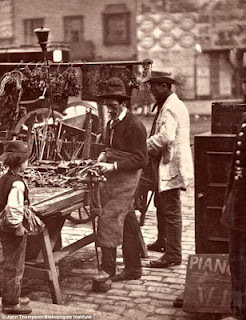 Today’s locks are getting more and more sophisticated as they rely on electronic measures to accomplish what mechanical keys have done for hundreds of years. You can purchase a deadbolt for your house that is keyless; it depends on your proximity to the device with a special activator that sends an electronic beacon to unlock your door, no key is necessary. The same goes for your automobile, with a properly encoded device the doors unlock when you get within a few feet and there’s no need to turn an ignition switch to start the car; just push the button and you’re on your way.

One of the first magic tricks I observed at a locksmith shop was a fellow who crafted a padlock key out of a nail. He hammered the narrow piece of steel flat on his vice until it would slide effortlessly through the padlock’s keyhole. He then studied the edge of the flat steel looking for marks which were filed a little at a time until the crudely fashioned key turned inside the mechanism and the shackle popped open. I knew I’d met a second cousin of Harry Houdini; Wow!

Thirty five years later that memory of creating a key out of “nothing” remains important as it stirred within my imagination a desire to know how he accomplished the magic trick. If it hadn’t been awe inspiring I might never have spent my Saturdays at the locksmith shop learning how to work on various locks and cutting keys to fit them.

It’s sad that in the not too distant future some young man will watch a modern day locksmith aim his electronic synthesizer at a door, flip a toggle switch or adjust a modulator knob until a green light flashes from an LED and the door pop’s open. Wow, can you teach me how to make a key like that? Flash Gordon, Security Specialist, won’t need a file to create and sculpt a piece of metal into a working key just an electronic doo-dad and some very expensive computer programs; I still like the photograph of an old timer applying his skills to a raw piece of metal in the public square.

One thought on “Locksmiths Make Keys”