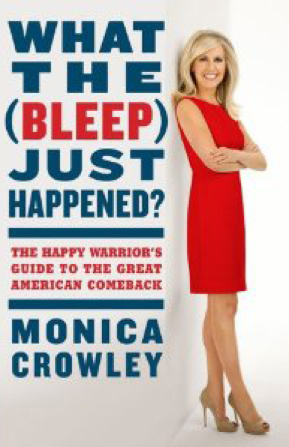 Purchase at Harper Collins or Amazon.com…

I just finished Monica Crowley’s: What the (Bleep) Just Happened?: The Happy Warrior’s Guide to the Great American Comeback. It was a thoroughly enjoyable read, enhanced by Crowley’s cheerful disposition and humor. We should all be such happy warriors in these less than ideal times – it’s the Breitbart way!

Not only does Crowley cover where we are today, but what to do about it as well. Her analysis of the dilemma we find ourselves in is forthright and bluntly funny at times. She’s smart as a whip and her clever narrative is greatly refreshing.

How did she start this book? Over dinner one night when reviewing with a friend the Progressive antics of Obama and his cronies:

Crowley is the essence of patriotism in her book. Unlike other personalities who we will not gift with a plug, she doesn’t get a thrill down her leg when mentioning Obama. Instead, she states what she really wants: “to restore America to its great foundational principles: individual freedom, personal responsibility, fiscal restraint, and economic liberty.” Here’s a slice:

Actually Monica, we were wondering the very same thing… You are exceedingly correct in pointing out what a monumental disaster Obama has been for this country and why we need a sweeping mandate next November. Elect Romney, control the Senate, expand our influence in the House and kick some Progressive butt. I just love some of her terminology: The Skinny Socialist Is a Big Fat Liar, Dr. Strangeleader, etc. Wish I had said that.

Normally, I don’t share tons of stuff from the authors that I read, but Monica is a kindred soul and I want you to read what she believes a happy warrior is (she gets it exactly right):

The Happy Warrior believes in two essential truths: First, that America can be saved. And second, that it is worth saving. We need a nation of Happy Warriors—focused on those two truths and the tough reality that the threats to our survival are all around us—to perform the rescue operation.

What is a Happy Warrior and how do we become a nation of them? There are 10 essential keys to the Happy Warrior, all of which require hard work, dedication and attitudinal changes. But if we understand and undertake them, the journey to renew America will be spectacularly rewarding.

First, we must recognize that the Happy Warrior is above all a warrior. We must realize that we are in a war. We’re in an ideological war, an economic war, a political war, a cultural war and a war abroad for our superpower primacy. When Reagan became president, he knew we were in brutal economic and international wars for America. When Margaret Thatcher became Prime Minister, she knew Great Britain was deep in those wars as well. Once we recognize that we’re in the war, then we must be prepared to fight it. That means understanding that the other side is going to hit back ruthlessly and relentlessly, and that we’ve got to persevere despite the attacks and hit back too, as difficult as that may be. So the first step for the Happy Warrior is to realize that we face a very real danger and that there’s no getting out of the war without fighting it.

Second, we must win these wars before they escalate into bigger cataclysms. We’ve got to be smart and self-aware enough to learn from our history, avoid repeating it, and letting things deteriorate until a devastating war is upon us, as with the Civil War, World War II and September 11, 2001. We must adopt a warrior attitude now, before it’s truly too late, and be prepared to be strong, confident and unwavering as we fight it.

Third, we must recognize that any war requires pain and sacrifice. The Happy Warrior’s choice—and only choice—is to face those uncomfortable things now or face much greater pain later.

Fourth, in most cases, we are at war with ourselves—the tendency to go wobbly, seek the easy way out, relinquish responsibility to the nanny state, fall into the waiting arms of the kooks promising the path of least resistance. We must fight these impulses in ourselves in order to form the national strength to fight these wars.

Fifth, the Happy Warrior fights to hold the other side responsible for its actions. The kooks fight to transfer responsibility and power away from the individual to the state. They argue that we are the ones who have to change and adapt to their freedom-crushing template. We reject that perversion of the American ideal.

Sixth, the Happy Warrior is fully comfortable that the underpinning of freedom is, in fact, individual responsibility. If we all fought determinedly for that belief, the state would naturally shrink as we the people won more of our own power back.

Seventh, the Happy Warrior believes in the inherent goodness of man. We believe that the state should get out of the way not just so we can prosper, but so we can share that prosperity unencumbered by the state. The Left’s philosophy of “social justice” requires the state to compel “charity” in order to “spread the wealth around.” And yet, without government compulsion, the American people are the most charitable on earth. Most other countries give about 1 percent or less of their national wealth to charity. The United States doubles that. While we recognize that there is a proper role for government to discharge its Constitutional duties and provide a reasonable social safety net, we also recognize that the kooks have so expanded government in the false name of “compassion” that we now have a nearly unrecognizable America.

Eighth, the Happy Warrior doesn’t believe that America is zero-sum, that success in one place must be punished to elevate the less successful somewhere else. The depraved premise of the kooks is that the rich got their wealth by “taking” it from the poor. In fact, approximately 80 percent of all millionaires are the first generation in their family to be rich. They didn’t inherit their wealth, a la Paris Hilton. They earned it through hard work and sacrifice. Unlike the professional victimhood hustlers of the Left, the Happy Warrior believes that economic expansion creates real growth.

Ninth, an effective happy warrior is a disciplined one. As long as our directives are consistent with our founding principles, we must focus on the fight for them until America has been restored.

And finally, the Happy Warrior is, in fact, happy. We take on our mission joyfully, certain that traditional American values are worthy of a passionate defense and that American power is not something to be ashamed of but celebrated. The best way to temper the inevitable pain of the battle is to carry it out with good cheer, confident in our mission, its integrity and success.

I just love that! I believe you will too. It’s way past time to turn the tables and take our country back. We are very close to winning and I know, like me, you are tired and distraught over what you see. But now is the time to rally and fight! We need to suck it up and fight like never before thru this next election and send all these creepy Marxists packing!!! Buy Crowley’s book and read it – it will energize you for the most important election in our lifetime. America is about to make a HUGE comeback.