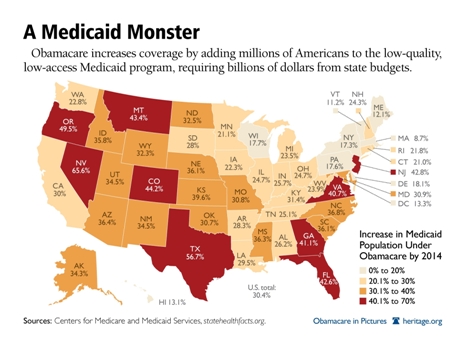 The Black Eyed Peas – Let’s Get It Started

We are going to end Obamacare at the state level by using the KISS principle – Keep It Simple, Stupid, so let’s get it started!

Using simplicity and common sense, we Americans can take this into our own hands and do what we need to do to prove that Obamacare is irrelevant and unnecessary at the state level. All we need is a simple solution, which this article provides, and one state that will pursue this by doing a little homework.

Let me start by telling you what this is NOT… this solution is not reliant on the politicians who foisted this upon us or the spineless politicians doing nothing to end it. It is not dependent upon repeal, courts, nullification, state-wide voting, Constitutional amendments, petitions or polls.

Now let me tell you what this is… it is about picking one or more states that will do some simple homework to prove beyond a shadow of a doubt that the Obamacare law is not applicable in their state. If we do this, we can proactively take control of the narrative to announce that Obamacare is irrelevant because the state is already compliant.

First, Obama and his comrades established that the fundamental basis of Obamacare is to ensure that everyone has healthcare. They claimed that 12 to 30 million people are going without healthcare and these people have a right to it. Has anyone challenged this with actual data that shows who these people really are? Read on and you will find out.

Second, Obama and his comrades claim that the 12 to 30 million phantom people are our poor and disadvantaged. This enables a powerful narrative that the media and left-wing talking heads can push onto the uninformed and ignorant 26% who support Obamacare. Is anyone challenging this narrative with actual truth? Not yet. That’s why, when we convey facts and even show sections of the actual legislation to uninformed people, their bottom line response is, “Well I think everyone should have healthcare.” Again, the false narrative wins the day, the uninformed remain ignorant and they actually believe that these phantom people who want healthcare cannot get it.

GOP Governors are playing checkers while Obama and his comrades are playing chess and are a few moves away from checkmate. Instead of responding to Obama’s narrative and falling into his trap, do some homework and speak boldly to create a completely different narrative. In other words, expose the truth.

States can take control of the narrative by defining a clear, true and concise narrative that lets people know that, from our poor to our elderly and everyone in between, all who want healthcare can already get it without Obamacare.

Can a state prove this? Yes. I contend that all a state needs to do is gather totals… the total number of people served by each of the categories delineated below. Every provider, insurer and program know how many people they serve in a given state.

Get the totals, add them up and then compare that number with the total population of the state to see how many people are not receiving healthcare from any of these categories. The number will either be zero or a very small percentage of the state population. Then, just a little more homework will reveal that the vast majority of this small segment of the state’s population is actually young, healthy people who choose not to spend their money on it because they don’t need it, they don’t use it and they don’t want it.

Take a very close look at all these programs and healthcare-delivery vehicles (below) that have been in place without Obamacare and before Obama took the Presidency. Look at all the people covered in these categories. A majority of working Americans who already have healthcare plans actually have no idea that all these programs exist and, unfortunately, Obama’s lies sound believable to them when no one counters him with the truth.

Don’t forget that Obama and his comrades gave the states another category:

After a state gathers the grand total of all the above categories and subtracts it from the state population, the state can create their own waiver in order to protect young peoples’ right to choose and once they are in this new category, everyone is accounted for in terms of healthcare and Obamacare is proven irrelevant and unnecessary because the state is already compliant. Everyone who wants healthcare already has it.

While we’re on the subject of going on offense and getting the truth out there, notice that Obama’s campaign rhetoric includes sound-bites that give the false impression that Obamacare will give people whatever healthcare they want – for free – and up to now, his lies remain unchallenged.

Know this… Obamacare does not address the quantity or quality of healthcare; it merely asserts that once the federal government controls our healthcare, a 15-member panel and about 159 new government agencies will decide the quantity, quality and location of treatment IF they allow you to have it.

Who is challenging Obama about the federally controlled Medicare program that, by far, denies more claims for the people it serves than any other form of healthcare coverage? Quantity or quality is not even part of the debate when talking about Obamacare because Medicare already shows us what happens when the federal government controls healthcare. Get out there and spread the truth about this!

Make no mistake, Obamacare does not make healthcare a “right,” it takes away our right to choose and it forces our young people to pay into a monstrous system that destroys the best healthcare system in the world, transforms citizens into serfs, creates another massive redistributive system that seizes the fruits of our labor and gives the federal government control of our finances and our lives. As Mark Levin says, it forever changes the relationship between government and citizen.

So… which states will remain on defense and constrain their public responses to the false narratives and clichés thrown at them by Obama and his comrades?

And… which states will do their homework, gather the totals and create the media firestorm that will stop Obamacare dead in its tracks?

Which state will be the first to prove that Obamacare is irrelevant in their state because they are already compliant and everyone who wants healthcare already has it?

Which state is ready to go on offense and protect individuals and businesses in their state from Obamacare?

Let’s get it started! If states do their homework, take control of the narrative and spread the truth, we’ll be kissing Obamacare goodbye in short order.